1872 - History of Lexington, Kentucky: Its early annals and recent progress

I wanted to better showcase a quite valuable book that @deandddd has called out at least twice before (once, twice) from circa 1872 that should have become a more prominent point of interest. As likely a primary source, it should possess a prominent place upon our book shelves.

It's also available in digital format on Archive.org. 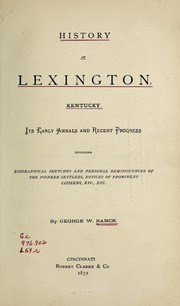 History of Lexington, Kentucky : its early annals and recent progress,...

... early and tragic days of the Dark and Bloody Ground.

... She [Lexington] was Jamestown of the West; the advance-guard of civilization; the center from which went forth the conquerors of a savage empire.

Very much of the rich past of Lexington has died with her founders. ... and the old landmarks are being rapidly obliterated.

The author has used every means to make his work accurate. ... In preparation of these pages, he has consulted many of the oldest and best-informed inhabitants of Lexington and Fayette county, and also every other attainable authority considered reliable.

The city now known as Lexington, Kentucky, is built of the dust of a dead metropolis of a lost race, of whose name, and language, and history not a vestige is left. Even the bare fact of the existence of such a city, and such a people, on the site of the present Lexington, would never have been knownbut for the rapidly decaying remnants of ruins found by early pioneers and adventurers to the "Elkhorn lands."

But that these remains of a great city and a mighty poele did exist, there can be not the shadow of a doubt. ... The somewhat notorious Ashe, who published a volume of travels in 1806, says: "Lexington stands on the site of an old Indian town, which must have been of great extent and magnificence, as is amply evinced by the wide range of its circumvallatory works and the quantity of ground it once occupied." These works, at the time he saw them (1806), nearly leveled with the earth by the ravages of time and the improvements that had been made by the settlers. The testimony of the learned Prof. C.S. Rafineque (Western Review, 1820), of Transylvania University, fully corresponds with this, and proves the former existence in and about the present Lexington of a powerful and somewhat enlightened ante-Indian nation. Other proofs are not wanting. The first settlers of Lexington found here a well, regularly and artificially built with stone (Morse), a domestic convenience unknown among the American Indians, and they plowed up curious earthen vessels, (Imlay, page 369) such as could only have been manufactured by at least a semi-civilized people.

... stone sepulchres, at Lexington, built into pyramid shape, and still tenanted by human skeletons... built ... in a way totally different from that of the Indians.

... large circular earthen mound, six feet in height, occupied a part of what is now called Spring street, between Hill and Maxwell. ... layers of earth of three different colors. ... earthen vessel of curious form and a quantity of half-burnt wood.

... an extensive cave existing under the city of Lexington, ... a subterranean cemetery of the original inhabitants of this place was discovered here nearly a century ago. (Letter to Robt. Todd, pub. in 1809)

In 1776, ... some venturesome hunters ... had their curiosity excited by the strange appearance of some stones they saw in the woods where our city now stands. They removed these stones, and came to others of peculiar workmanship, which, upon examination, they found had been placed there to conceal the entrance to an ancient catacomb, formed in the solid rock, fifteen feet below the surface of the earth. They discovered that a gradual descent from the opening brought them to a passage, four feet wide and seven feet high, leading into a spacious apartment, in which were numerous niches, which they were amazed to find occupied by bodies which, from their perfect state of preservation, had evidently been embalmed. ... during this period of blood and passion, the catacomb was dispoiled, and its ancient mummies, probably the rarest remains of a forgotten era that man has ever sen, were well nigh swept out of existence. But not entirely. Some years after the red men and the settlers had ceased hostilities, the old sepulchre was again visited and inspected. (Ashe) It was found to be three hundred feet long, one hundred feet wide, and eighteen feet high. ... At this time the entrance to this underground cemetery of Ancient Lexington is totally unknown. ... the idea that it ever existed is laughed at by those who walk over it...

That Lexington is built upon the site of an ancient walled city of vast extent and population , is not only evident from the facts here detailed, but the opinion becomes almost a certainty when viewed in light of the historic proofs that can be produced to support the claim, that all the region round about here was at a distant period in the past the permanent seat of a comparatively enlightened people.

"... the ancient monument or fortification situated about two and a half miles from Lexington, in an easterly direction, and above the head of Hickman creek; and we have ascertained that it is formed by an irregular circumvallation of earth, surrounded by an outside ditch.

"The shape of this monument is an irregular polygon of seven equal sides. The whole circumference measures ... four thousand eight hundred feet–less than a mile. ...
"The angles are rather blunt. Two of the angles have deep ravines; one lies at the angle between the west and the southwest sides, and the other between the south-southeast and the east-northeast sides. This last is the largest and deepest–it reaches to the limestone, and had water in it. It forms a brook running easterly, ...

It just goes on and on! This information may only occupy less than 4% of the book, but it is amazing information and should be closely reviewed.

The works of Michael Mott and Edward Bulwer-Lytton's "The Coming Race" pound my mind upon reading these remarks... Also echoed are the earlier gazetteers and remarks about The Book of Mormon cannot stop invading my thoughts. I think a solid investigation could yield much fruit both in the way of writings and personal exploration... if it has not been covertly destroyed by the Smithsonian and other dark destroyers of true history.

@Soretna , this article about the hidden ancient civilization of Kentucky , suggests a very strong correlation with the Etidorpha story (published later in 1896) and the Mormons...the year 1872 is extremely significant too !