While this may have a religious significance for many, I think it also has some very important - and powerful - historical ramifications. While the Book of Mormon is another testament of Jesus The Christ (The Anointed One), it also has the ability to shed light on ancient history and the ancient inhabitants of North America.

Many people believe the Book of Mormon geology is in Central and South America, however there's powerful indications (both religious AND physical) that it actually happened in North America in the Hopewell regions, starting from Georgia and moving on up through the Midwest to Canada.

We start off with a review of the Hopewell Interaction Sphere: 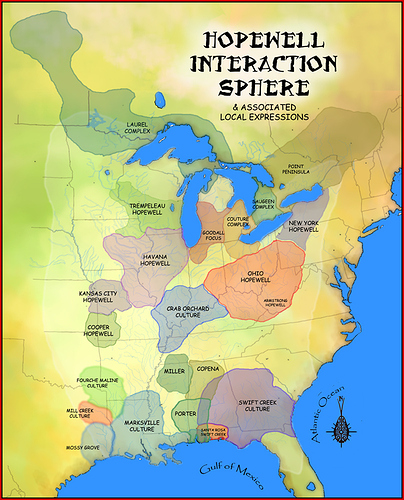 This is the foundation for the following video:

I believe that not only are there many important discoveries that can come out of this knowledge, but since the Smithsonian and other folks who lived in the 1800s worked so hard to shut down American Indian archeological evidences (and destroyed or hid so many remains/bones of giants) in order to impede Joseph Smith, Jr. and "The Mormons" (something that might be considered a validated "conspiracy theory" today) we should very much open our eyes to this information and be very aware of it. Usually when people work hard to cover up information we find that that information is critically important to our growth and understanding.

Soretna , I have a very strong gut feel about the Mormons knowing some secrets that are based on firm facts...even the library of metallic plates found in the Tayos caves of Ecuador had some link to the Mormons .

I once read somewhere that the word "Mormon" was somehow derived from the name of "Mor"gan (William Morgan) , based on whose story , Etidorpha was written . Strangely William Morgan was the first character to be sort of "Sainted" in the Mormon cult , also Morgan's wife later got married to Joseph Smith , the founder of the Latter Day Saints :

"By 1837, some historians believe that Lucinda Pendleton Morgan Harris had become one of the plural wives of Joseph Smith , founder of the Latter Day Saint movement. She continued to live with George Harris. After Smith was murdered in 1844, she was "sealed" to him for eternity in a rite of the church."

" In 1841 the Mormons announced their vicarious baptism of William Morgan after his death, as one of the first under their new rite to posthumously offer people entrance into the [Church of Jesus Christ of Latter Day Saints"

@Soretna I find it very interesting that in Heber C. Kimball's diary from 1834, he discusses the unearthing of the bones of one of America's ancient inhabitants. According to Joseph Smith's revelation, this man was named Zelph and was identified as one of the dead Nephites slain in the last great war between the Nephites and Lamanites.

But what is perhaps even more interesting is that Kimball notes the following: "It is a common thing to find bones thus drenching upon the earth in this country."

Wow, where did all those bones go?! Hmmm...
cough Smithsonian cough

Here is a screenshot from a scan of Kimball's diary as it appeared in Times and Seasons:

Oddly enough, I could not find this diary page from BYU's official archive of PDF scans. If you flip between the pages there, you'll notice that pages 788 and 789 are missing. Did someone mess up? Or does someone not want people to find out that America used to have many hundreds or thousands of bones from its previous inhabitants? Hmmm...

This is phenomenal research and a phenomenal find @Ephraimite. Thank you so much for sharing this precious jewel. I worry - so very much - that we are missing a tremendous treasure trove of knowledge from printed material prior to 1900, such as this. This same thing has happened with so many things that have to do with the absolute destruction and hiding of information about the "native" Americans from North America (whether it is these human bones that "drenched" the land) or the GIANTS' bones that were also prevalent!

On another note and back to the original topic, the following video might be interesting (I took a moment to repair the audio for it), but be warned, I believe the researcher (while he's done great work here) is really being too kind towards the other non-Midwest-USA theories:

From what I've read and am seeing from various authors there's way too much of a bias (and fear) going with losing their hold on South & Central America locations of the Book of Mormon. There are far too many things both religiously and secularly that point to a North American location. Nonetheless, regarding this particular video, I think there is even value in using it to "line things up", especially after we take grammatical issues into consideration. (For example, it may be worth reading the Book of Mormon WITHOUT punctuation (web archive & .doc archive)since it was originally dictated in this manner!)

Just today I stumbled across an 1821 Ohio Gazetteer that shows a very neat structure from which Circleville, Ohio received its name that I had not heard of before (page 25) and even diagrams and explains it in such a way that I haven't seen elsewhere (more detail than even here): 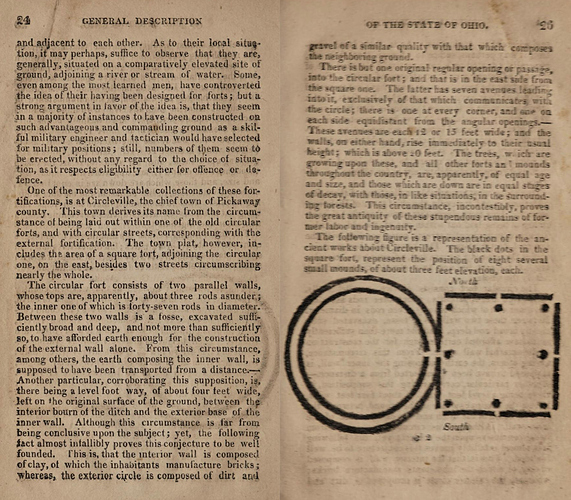 It really does seem that we're missing so much and should redouble our efforts to find such gems hidden throughout older material that's been generally lost (or worse).

I just got to know that there is actually an impressive monument dedicated to the memory of William Morgan at Batavia , New York . So "I AM The Man" from Etidorpha was real in every sense of the word , historically .

Good stuff @sidharthabahadur, I think this information is good to collect into a "William Morgan" thread: William Morgan

@sidharthabahadur You have great input there. And you make a lot of valid points, although there are a few minor points which I feel that I should offer some clarifications on.

First of all, regarding the word "Mormon." It didn't come from Morgan. It originally came from the Book of Mormon, the sacred text which Joseph Smith translated from a set of golden plates. The ancient American scribe who compiled this text was named Mormon, hence the name of the book. The word "Mormon" was subsequently used as an epithet applied to anyone who joined Joseph Smith's Church of Christ (which was what the church was called before it was called The Church of Jesus Christ of Latter-day Saints). From Wikipedia (bold emphasis added, and my own notes in [bold italic brackets]):

The terms Mormonism and Mormonite were originally descriptive terms invented in 1831 by newspaper editors or contributors in Ohio and New York to describe the growing movement of "proselytes of the Golden Bible". Historian Ardis Parshall quotes a 1831 news item, appearing within the first year of the LDS Church's founding, as reading, "In the sixth number of your paper I saw a notice of a sect of people called Mormonites; and thinking that a fuller history of their founder, Joseph Smith, Jr., might be interesting to your community … I will take the trouble to make a few remarks on the character of that infamous imposter." [you can see that whoever wrote this original news article in the 1830s was hostile to Joseph Smith and the Latter-day Saints]

The term Mormon developed as a shortened version of Mormonite a year or two later. In all cases prior to 1833, these terms were used descriptively, despite nearly universal negative sentiment toward the movement. [the term was used as an abusive epithet] By the 1840's the term was adopted by Mormon leaders to refer to themselves, though leaders occasionally used the term as early as 1833. The term took on a pejorative meaning sometime before 1844 with the invention of the pejorative term Jack Mormon to describe non-Mormons sympathetic to the movement. Since that time, some have argued that the term Mormon has generally lost its pejorative status. [it has never truly lost its pejorative status because that was the context in which it was originally used]

Also, the concept of sainthood doesn't really exist in our doctrine. At least, not in the Catholic or Protestant sense of sainthood. Everyone who joins our church is considered a "Saint" in the sense that they are expected to follow the teachings of Jesus Christ and act accordingly. Hence the name by which we are called, "Latter-day Saints." The words "latter-day" refer to our belief that the Second Coming of Jesus Christ is going to occur in our time.

You are correct that William Morgan's wife (Lucinda) married Joseph Smith and was sealed to him. "Sealing" simply means that their marriage endured beyond the grave, different from typical marriages of "till death do we part." We believe that families and marriages can last forever and that is the only purpose behind the sealing rites.

That is also why we perform vicarious baptisms for the dead. William Morgan's wife probably specifically requested that the brethren perform a baptism for him because she wanted to be united with her husband after death (as she presumed he was dead). She probably actually planned on being married to both Joseph Smith and William Morgan by being sealed to him also in the temple (yes, women had multiple husbands at that time as well). It is interesting that he was the first person to receive this posthumous ordinance. Although, it's hard to say if Morgan was actually dead in 1841 or if he was already transformed at that time into his higher self (as documented in Etidorhpa).

Again more great info @sidharthabahadur and @Ephraimite, but this might be good to keep over in the new thread on William Morgan (perhaps?).

I'm not sure if we should move these or just be more careful in the future thinking about how to keep threads perhaps more focused on topics... Hmmm.