Wanted to share and document a discovery I came across recently as I was reading about the Egyptian language. I came across some of the writings of Joseph Smith in this regard. In particular I found this most fascinating image, from a Papyrus that he purchased and translated through Revelation (i.e., inspiration via spiritual communication): 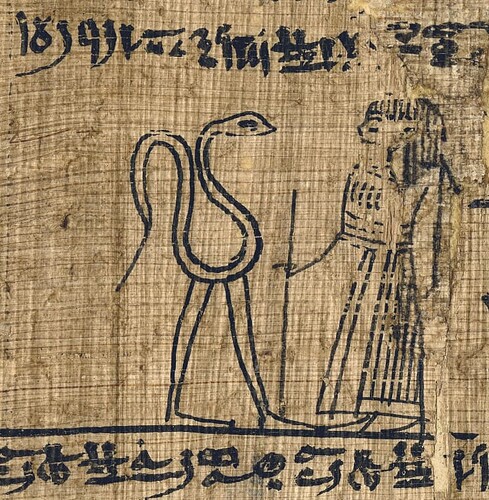 The following description was given by his friend Oliver Cowdery in "Egyptian Mummies—Ancient Records," Messenger and Advocate, vol. 2, no. 3 (December 1835), pp. 234, 236 (emphasis added):

Upon the subject of the Egyptian records, or rather the writings of Abraham and Joseph, I may say a few words. This record is beautifully written on papyrus with black, and a small part, red ink or paint, in perfect preservation. [He then describes in several paragraphs the story of how these records were obtained]

The language in which this record is written is very comprehensive, and many of the hieroglyphics exceedingly striking. The evidence is apparent upon the face, that they were written by persons acquainted with the history of the creation, the fall of man, and more or less of the correct ideas of notions of the Deity. The representation of the god-head-three, yet in one, is curiously drawn to give simply, though impressively, the writers views of that exalted personage. The serpent, represented as walking, or formed in a manner to be able to walk, standing in front of, and near a female figure, is to me, one of the greatest representations I have ever seen upon paper, or a writing substance; and must go so far towards convincing the rational mind of the correctness and divine authority of the holy scriptures, and especially that part which has ever been assailed by the infidel community, as being a fiction, as to carry away, with one might[y] sweep, the whole atheistical fabric, without leaving a vestige sufficient for a foundation stone.

This is nothing short of remarkable!!!

Oliver Cowdery identified this same Serpent in the Papyrus as being clearly associated with the Serpent in the Creation Story of Genesis. I find it most amazing that the Egyptians used an image of a literal snake with legs to represent this character from the Genesis account.

I would guess that the Egyptians were copying from an older, still more ancient record (or perhaps were recording the story as passed down by oral tradition), and they attempted to literally depict what was given by the older account. Hence the awkward imagery of a wiggly snake with legs. Clearly the older account was very explicit about how the Serpent walked uprightly, and talked to Eve!

Joseph Smith also wrote the following very intriguing rendition of Genesis 3:1-15 (emphasis added, and my own comments interspersed throughout in italic square brackets: [ ] ):

And now the serpent was more subtle than any beast of the field which I, the Lord God, had made. [almost implying He didn't make the serpent]

And Satan put it into the heart of the serpent, (for he had drawn away many after him,) [a very enigmatic parenthetical clue here—it almost sounds like this Demonarch named Satan drew away a reptilian race to follow after him and worship him] and he sought also to beguile Eve, for he knew not the mind of God, wherefore he sought to destroy the world.

And he said unto the woman: Yea, hath God said--Ye shall not eat of every tree of the garden? (And he spake by the mouth of the serpent.) [another oblique parenthetical hint interjected here—it sounds like Satan possessed a reptilian creature and used it as his mouthpiece. The Papyrus would indicate that this reptile walked on two legs.]

[... omitting the verses wherein Eve is beguiled by the Serpent, they eat the fruit, and are subsequently questioned by God ...]

And I, the Lord God, said unto the serpent: Because thou hast done this thou shalt be cursed above all cattle, and above every beast of the field; upon thy belly shalt thou go, and dust shalt thou eat all the days of thy life; [this sounds like a decree from the Gods that the reptilian race shall henceforth be devolved and lose their dominion upon the face of the earth—ergo the many small, puny reptile creatures we see predominantly on the face of the earth in this era. Gone are the days of the massive roaming dinosaurs (however intelligent those creatures actually were—never mind whatever actually caused their disappearance). The largest reptiles we see nowadays are things like the crocodile or the komodo dragon. But we know much larger, more deadly creatures once dominated the earth in abundance. Perhaps they all vanished beneath the earth's surface into the cavernous realms? I think we all here know the answer... perhaps this banishment into the earth's crust was also part of the Gods' divine decree of punishment against the reptilians for their crimes? The so-called Lacerta Interview would seem to confirm this as being the case, if one ignores her obvious pro-reptilian propaganda.]

And I will put enmity between thee and the woman, between thy seed and her seed; and he shall bruise thy head, and thou shalt bruise his heel. [representative of the overarching struggle between Christ and Satan; the Children of the Gods and the Forces of the Serpent.]

There are other images from this same folio of Papyrus, suggesting this is a depiction of the Creation Story: 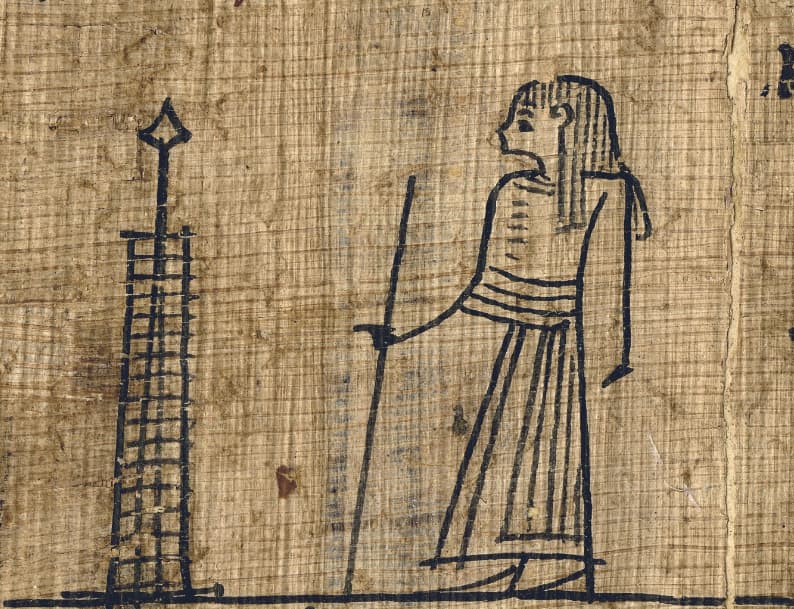 I find it intriguing that Eve appears to be wearing something resembling the Urim and Thummim breastplate, as worn by the High Priests of ancient Israel. She also appears to be wielding a scepter in her hands. Evidently this indicates that the Woman in this depiction represents Royalty. Was not Eve the First Mother of the Human Race, thus making Her something of a Queen? 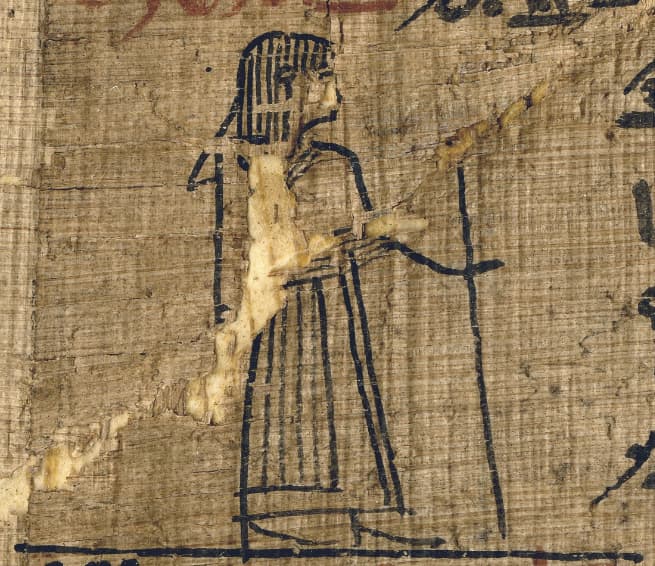 Eve turns away from her former direction... 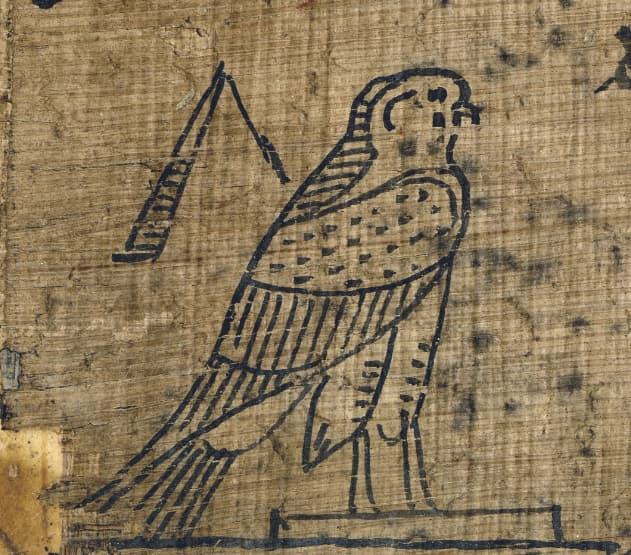 Lastly, we see a bird with what appears to be a flail. Possibly representing a messenger from God, informing Eve and the Serpent the consequences of what has transpired? The bird in Egyptian hieroglyphs is often associated with this type of symbolism.

All of these images are viewable here, from an HD photograph of the entire Papyrus Fragment: Fragment of Book of the Dead for Semminis–B, circa 300–100 BC, Page 0

Finally, I found the following image from Written by the Finger of God by Joe Sampson (1993), p. 273 (given under the description of the letter Tav): 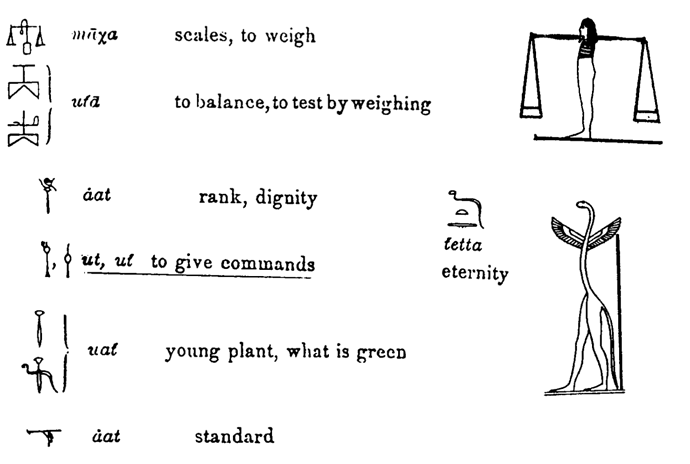 Wow! Another serpent with legs!! This one has wings, too!

The following definition is given, drawing on Kabbalistic interpretations of the letter Tav, as well as the Egyptian symbolism related to the letter: 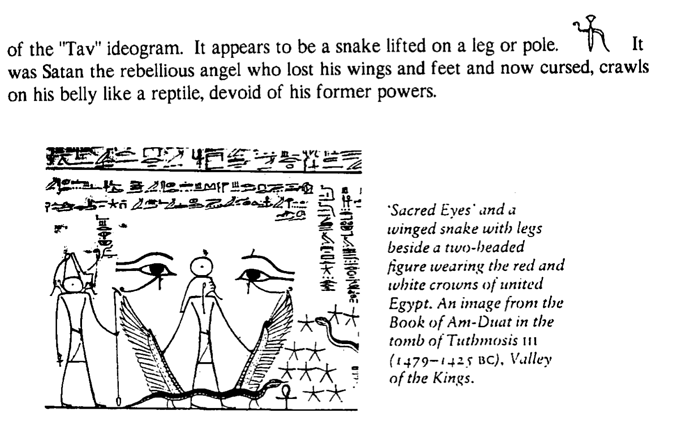 Quite remarkable, if you ask me!

It appears that walking, talking serpents had a real, undeniable presence in the Genesis Creation Story... going all the way back to Ancient Egyptian records. Now the question becomes whether we can unravel the nature of the multiple factions of Gods involved... such as the Annunaki vs. Elohim, etc. ... but this post is long enough so I rest my case for now

Thank you for sharing these excellent and exceptionally relevant remarks and observations @Ephraimite. I should like to collaborate with you on another effort that I've begun working on and would like to share with openly soon based around some similar observations and research that connect with this and is evident from the things you've shared here.

Fantastic article @Ephraimite , Wow !! This is one of the best on ancient Egypt and the clearest one , about reptilian influence on Egyptian civilisation .