I found a very interesting reference in a Mormon Endowment Ceremony published in 1866, which I thought was significant enough to share here.

During the 1800s, a number of Mormon Temple Endowment exposés were published, typically in Anti-Mormon books as an attempt to embarrass them. By my count, something like a dozen or so were published throughout the 1800s. This one in particular was published in a book called The Mormon Prophet and His Harem by Catherine Waite (1866). This book contains a number of inaccuracies, which I won't delve into here (see footnotes at the bottom of this post), but I want to draw attention to a certain portion only.

The part which interested me was chapter 13, The Endowment.

Beginning on page 247, we see the following text, taken from the dialogue of the Gods as they create the planet Earth (Elohim, Jehovah, Michael, and Jesus Christ): 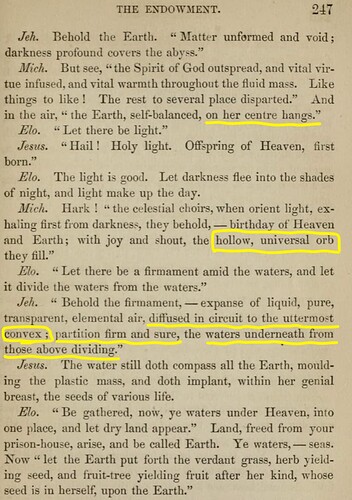 Here we have a direct reference to a hollow earth being created by the Gods. The earth is described as hanging on its center (reminiscent of The Smoky God), the water is said to be diffused to the "uttermost convex" (suggestive of being dispersed throughout a hollow shape), the water is explicitly stated to have a partition in between, dividing the "waters underneath from the waters above," and lastly we have a literal statement that the light fills the earth as a hollow orb!

It doesn't get much more explicit than that.

On the next page, Satan enters the Garden of Eden (most likely inside the inner concave of the Earth) in the form of a serpent, but notice the peculiar pains which are taken to describe his half-human, half-reptilian appearance:

This is consistent with later Endowment exposés, many of which similarly describe Satan's actor as "slithering" or "wriggling" away, and "hissing" when he is cursed by the Elohim. Again, special pains are taken to emphasize his half-human, half-reptilian appearance.

The dialogue in this exposé is pretty specific, unlike a number of others which only summarize the dialogue and give an overview of the proceedings. I have to think this one either took its text from a stolen manuscript, or from notes taken down very soon after experiencing the ceremony.

To my knowledge, no one has ever before documented that teachings of the hollow earth used to occur in LDS Temples, although much of the world has wondered what "mysteries" are taught therein.

I believe this is very solid evidence that Joseph Smith taught that the earth was hollow, and also that Satan appeared to Adam & Eve in the form of a humanoid reptilian. We've established elsewhere that he was aware of this half-reptilian creature in the Garden of Eden, and also that he taught the earth is hollow, see:

Rodney Cluff has also documented these teachings on his website:

Footnotes regarding the book quoted from:

Mrs. Waite's book is, of course, not without serious bias, as summarized by Hubert Howe Bancroft in his History of Utah, p. 637 (my comments in square brackets [ ] ):

The Mormon Prophet and his Harem: or, An Authentic History of Brigham Young, his Numerous Wives and Children, by Mrs C. V. Waite. Cambridge, 1866. Apart from the opening chapter, which contains the early life of Brigham, the first half of this work is devoted to the political history of Utah [as she attempts to frame Brigham Young for ordering the Mountain Meadows Massacre, a theory which is utterly refuted by Juanita Brooks in Mountain Meadows Massacre, the definitive study of the subject. A very solid case is also made about the extreme improbability of Young's involvement in the massacre in "The Road to Eternal Life" by Fred C. Collier, published in Doctrine of the Priesthood, 1973, vol. 1, no. 1, pp. 56-65]. Its main interest centres, however, in the information given in the latter portion, as to the family and social relations of the Mormon leader [as she attempts to malign him, as well as the social system of polygamy amongst Latter-day Saints]. There is the inevitable chapter on polygamy, written, the authoress remarks, as dispassionately as the writer's utter abhorrence of the system will permit. There is also a chapter where the mysteries of the endowment house are described in the form of a burlesque, and others where Brigham is set forth as prophet, seer, revelator, and grand archee. The volume is compact and well written [insofar as grammar and formal writing style is concerned]; but though many of the facts may have been gathered, as is claimed, from original sources [however, in some areas containing serious accusations, no sources are given], they contain little that is not well known at the present day [and which Bancroft discusses at great length and in much greater detail, in his unbiased book, The History of Utah].

I now believe the book "Etidorpha" was itself a covert project of the Mormon society , for "full disclosure" about Inner Earth...!

@Ephraimite , I am trying to determine if Llewellyn Drury , the one who received the manuscript from that mysterious man and 30 years later passed it onto John Uri Lloyd (the author who used that manuscript as the basis of his book "Etidorpha") were themselves Mormons , or were influenced by Mormons . What is your view on this ?

@sidharthabahadur I've never seen any evidence that John Uri Lloyd or Llewellyn Drury had any such connection to the Latter-day Saints or to Joseph Smith. The closest connection seems to be, as we went over before, that William Morgan's widow was sealed to Joseph Smith. Also, both Joseph Smith and William Morgan had a rocky relationship with Freemasonry, and both were later killed at Masonic dictates (although in Morgan's case he was actually thrown underground). Despite these parallels, I've seen no evidence of a concrete connection between the writing of Etidorhpa and the Church of Jesus Christ of Latter-day Saints.

Hmm...anyhow , thanks @Ephraimite , I will continue exploring this possibility . How Etidorpha came to be written and published is itself a fascinating mystery , worthy of a book , or maybe even a Hollywood movie...on that note , I wonder if anyone at Hollywood ever thought of making a movie on Etidorpha ? The subject is of course , extremely interesting and with today's level of visualisation technologies , the underground realms described in Etidorpha could really be "brought to life" on the big screen :))

@sidharthabahadur It's certainly a good question! Let me know if you stumble across any evidence I haven't

I agree, Etidorhpa on the big-screen would be a marvelous experience. Although, on the other hand, Hollywood seems to corrupt everything it touches, so maybe that's not such a great idea...

I agree @Ephraimite , if at all it were to be attempted , only a worthy director - the likes of James Cameron (no less) should try , else it would make a mockery of Etidorpha !

The kids these days , who keep watching movies from the "Marvel Universe" franchise all the time , should get to see something altogether different - which is also REAL , not make believe !!

@Ephraimite , I seriously think anyone in our group who has even peripheral level contacts with Hollywood , should broach this subject - who knows , it might just click ?

By the way , the same goes for the Smoky God - again , based on a true story & eminently translatable to the cinematic medium...it could turn out to be a blockbuster adventure movie on the big screen...what a Magnum Opus that would be for whichever film maker attempts it :))

Wow! That's quite a find! I had never heard of that before. It certainly does sound like the person who wrote that version of the endowment believed in a hollow earth.

This evidence shows very clearly that the Latter Day Church used to teach that the Earth is hollow, and that it has been covered up.

I am fast arrriving at the conclusion that the western churches have all been infiltrated.