"This part of Kentucky is the most remarkable portion of the known world,
and although now neglected, in a time to come is surely destined to an
extended distinction. I have referred only to the surface, the skin
formation of this honeycombed labyrinth, the entrance to the future
wonderland of the world. Portions of such a superficial cavern maze have
been traversed by man in the ramifications known as the Mammoth Cave, but
deeper than man has yet explored, the subcutaneous structure of that series
of caverns is yet to be investigated. The Mammoth Cave as now traversed is
simply a superficial series of grottoes and passages overlying the deeper
cavern field that I have described."

" There were also, in side caverns to which I was led, combinations of
sounds and scenes in which floating strains and
fleeting figures were interwoven and interlaced so closely that the senses
of both sight and hearing became blended into a single sense, new, weird,
strange, and inexpressible. As flavor is the combination of odor and taste,
and is neither taste nor odor, so these sounds and scenes combined were
neither scenes' nor sounds, but a complex sensation, new, delicious.
Sometimes I begged to be permitted to stop and live forever 'mid those
heavenly charms, but with as firm a hand as when helping me through the
chambers of mire, ooze, and creeping reptiles, my guide drew me onward.

" But to return to the subject. As to my guide being a cavern-bred
monstrosity, I do not remember to have said that he was cavern-bred, and if
I have forgotten a fact, I regret my short memory. Did I say that he was
always a cavern being. Did I assert that he had never lived among mortals of
upper earth? If so, I do not remember our conversation on that subject. He
was surely a sage in knowledge, as you have experienced from my feeble
efforts in explaining the nature of phenomena that were to you unknown, and
yet have been gained by me largely through his instruction. He was a
metaphysician, as you assert; you are surely right; he was a sincere,
earnest reasoner and teacher. He was a conscientious student, and did not by
any word lead me to feel that he did not respect all religions, and bow to
the Creator of the universe, its sciences, and its religions. His demeanor
was most considerate, his methods faultless, his love of nature deep, his
patience inexhaustible, his sincerity unimpeachable. " Yes," the old man
said; " you are right in your admiration of this lovely personage, and when
you come to meet this being as you are destined yet to do- for know now that
you too will some day pass from surface earth, and leave only your name in
connection with this story of myself- you will surely then form a still
greater love and a deeper respect for one so gifted, and yet so
self-sacrificing."

" Old man," I cried, " you mock me. I spoke facetiously, and you answer
literally. Know that I have no confidence in your sailor-like tales, your
Marco Polo history."

" Ah ! You discredit Marco Polo? And why do you doubt?"

" Because I have never seen such phenomena, I have never witnessed such
occurrences. I must see a thing to believe it."

" And so you believe only what you see?" he queried.

Seems odd there has not been a serious deep expedition into the caves of Kentucky.

Ubajara? The Tunnel of the Phoenicians in Brazil ?

About cave entrances to worlds below-

There are also these comments by Roerich, by the guide he employed on
his
trip throughout Tibet.

" When we saw entrances of caves, our caravaneers told us, Long ago people lived there; now they have gone inside; they have found a subterranean passage to the subterranean kingdom. (emphasis added) Only rarely do some of them appear again on Earth. At our bazaar such people come with strange, very ancient money, but nobody could even remember a time when such money was in usage here.' I asked them, if we could see such people. And they answered, Yes, if your thoughts are similarly high and in contact
with
these holy people, because sinners are upon Earth and the pure and
courageous people pass on to something more beautiful."'

"'Great is the belief in the kingdom of the subterranean people.
Through all
of Asia, through the space of all deserts, from the Pacific to the
Urals,
you can hear the same wondrous tale of the vanished holy people. And
even
far beyond the Ural Mountains, the echo of the same tale will reach
you'"
(emphasis added).

See the introduction to Seven Days North of Tibet:

I think that these throughways were known previously, and that there
ws
traffic through them. Not anymore, and they are practically forgotten
by
surface people. Even the Tibetans are forgetting them, and the
underground city of Shamballa, in their collective memories.

There are very tight controls on cave exploration. Going into the Mammoth Caves network tours is very interesting in terms of seeing just how much control exists.

Hmmm...."very tight controls on cave exploration" ??!! @Soretna , there you have it - a solid clue of something being hidden :))

@Keith you may want to perhaps note especially page 16 for Kentucky in that document.

Additionally, note how most of these laws seem to spring up around the 1980s.

@Soretna , this is quite an eye popping document ! Under the clever garb of "protecting the environment" & safety of the explorers , they've essentially made it unlawful to explore caves beyond a certain limit .

There are no similar stringent laws against , sky diving , bungee jumping , Scuba diving , paragliding and other adventure sports that are equally , if not more risky than cave exploration .

I guess it depends on the location. Maybe they are hiding something. But other reasons include idiots wreaking the caves and litigation from other idiots who sue landowners or the state if they get hurt.

Some good news in New Mexico 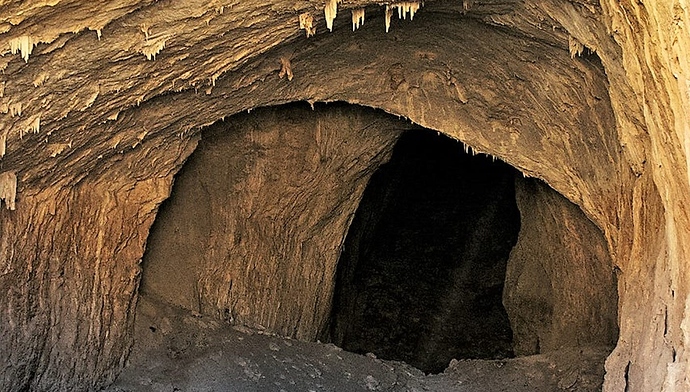 Cave at your own risk: NM state law releases landowners from liability

A New Mexico senate bill was signed into law on Feb. 4 by Gov. Michelle Lujan Grisham to make those undiscovered caves easier to uncover. 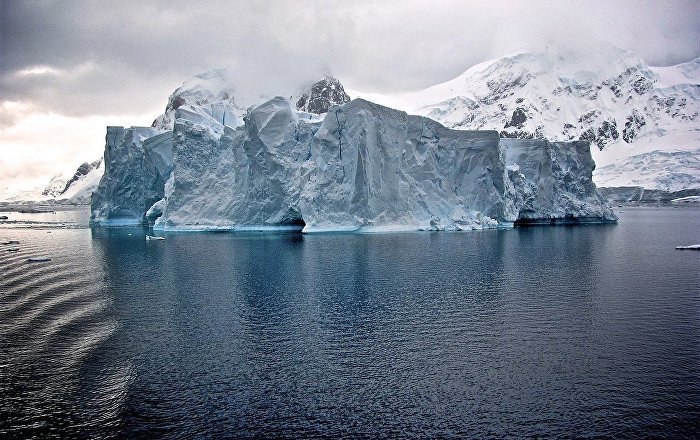 'Ok, Google, What Is This?' A Huge Cryptic Entrance 'Reappears' on Maps in...

If we are going to speak of caves and the underground dwellings of underground creatures, how can we forget Beowulf? We can't!

"Hrothgar, Beowulf, and their men track Grendel's mother to her lair under a lake. ... Beowulf jumps into the lake, and while harassed by water monsters gets to the bottom, where he finds a cavern. Grendel's mother pulls him in, and she and Beowulf engage in fierce combat." 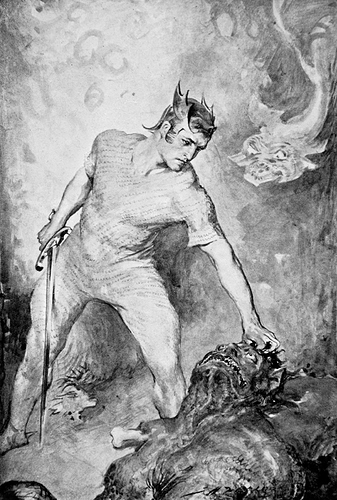 The heroic poem Beowulf is the highest achievement of Old English literature and the earliest European vernacular epic.

You know, this tale seems to give us a genuine description of someunderground creatures. And they are not way down deep. This desrves some thoughtfulness on our part.

This is an old posting from my collection of old postings. It wasn’t mine, though. I don’t know who sent it.

”History of Cave Science, the Exploration and Study of Caves, to 1900"
by Trevor R. Shaw, Sydney Speleological Society, 1992

REMARKABLE TIDINGS from the day of St. Peter and St. Paul in the
year 35!
Twenty-five citizens of the town of Amberg set off to a mountainous
area three
miles distant from Amberg. Near the village of Predenwind they went
into a
huge hollow mountain, about 900 Klafter [1700 m] deep, and walked
through to
the other side. The marvels they saw there have been written down by
Berthold
Buchner. The ignorant will not believe this story, the experienced
ones will not
think it possible. But we have seen it with our own eyes, and it is
the truth. - 1535

An excerpt from Chapter Nine of Alec Maclellan's book: The Lost World of Agharti

Ubajara? The Tunnel of the Phoenicians in Brazil

Here is something very interesting about a tunnel complex below Lexington, Kentucky. It is from the David Hatcher Childress book Lost Cities of North and Central America, Pages 390 – 391. (If he or someone else that he knows has found them, how can they be lost?) Anyway, here it is …

“Jim Brandon, author of Weird America, says that a sizable complex of tunnels is supposed to lie somewhere beneath Lexington, Kentucky. According to Brandon, ‘G.W, Rankck relates in his 1872 History of Lexington that hunters from the pioneer settlement of Boonesborough in 1776 discovered rocks of peculiar workmanship with a tunnel behind them. Small at first, this portal eventually expanded into a sort of gallery, four foot wide and seven high that inclined sharply down into the rock. After a few hundred feet, the ramp led to a 300 foot long, 100 foot long chamber, and 18 feet high. Inside this lay idols, altars, and about 2,000 human mummies”.

“According to the legend, these catacombs were subsequently explored a number of times. In 1806, they were visited by Thomas Ashe, the Irish Travel writer. Eventually, the story goes, the entrance was lost as the city grew overhead …”

We cannot inform ourselves and acquire background merely by reading snippets from the internet and viewing short videos. It is important to build up a library of hollow earth, inner worlds books, and absorb the research and findings of others.

Buy some books of the hollow earth and cavern worlds!

I don't recall the source. Knock yourselves out.

REMARKABLE TIDINGS from the day of St. Peter and St. Paul in the year 1535!
Twenty-five citizens of the town of Amberg set off to a mountainous area
three
miles distant from Amberg. Near the village of Predenwind they went into a
huge hollow mountain, about 900 Klafter [1700 m] deep, and walked through to
the other side. The marvels they saw there have been written down by
Berthold
Buchner. The ignorant will not believe this story, the experienced ones will
not
think it possible. But we have seen it with our own eyes, and it is the
truth. - 1535

Die Breitenwinner Höhle http://members.aol.com/franzli2/bre.htm This site
can be translated using http://translator.dictionary.com/url.html and
selecting "German to English". It is a rough translation, but I did come up
with this interesting translation: "On the southern Frankenalb in Bavaria
there is an unusual cave, around which it became very quiet since the Second
World War. It is situated in the midst of the troop exercise area high rock
and is almost not not accessible therefore" "Only at very rare opportunities
that could be done, z:B. on the occasion of the federation conference of the
Germans excavate and Karstfor into Velburg 1976." I found this story in
History of Cave Science; The Exploration and Study of Limestone Caves, to
1900 by Trevor R. Shaw, Second Edition Published by the Sydney Speleological
Society, 1992. The call letters, here in the University of Arizona Library
are: "GB 601 A4 S54 1992 Science" (Science Library) It is interesting that
this cave appears to be almost "off limits" in a military training area.....