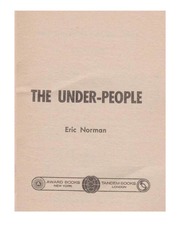 THE UNDER PEOPLE Eric Norman : Free Download, Borrow, and Streaming :...

another small work from the incredible year of the revolutionary books, 1969, investigation  on subterranean people, datas from  ancient world, modern...

This is one book I've never read. But it should contains a few jewels, most hollow earth and underground worlds books do. If you se a jewel in a muddy place, pick it out.

I have just started reading the book, and I have found a few reports of underground access points, even in North America, of which I had never heard before. It is good to read these things.

At the bottom of page 23, and mostly at the top of page 24, there is a comment about the worlds below China, there being a " ... land of a thousand serpents".

You know, to say that there are such worlds below Tibet is one thing, but at least Tibet is next to China. This is the ffirst time, though, that I have ever heard a comment of serpent worlds right below China. This means the world of evil beings. And, of course, such serpents must have influence on the worlds above them. The tibets claimed to Ossendowski that there are tunnels stretching from Tibet to North America. E.g., the Mayan race in Mexico also exists in South India, and the Dravidians. And the Mayan priests would kill and dismember human offerings to the serpents from the tops of their pyramid-like temples. The bodies would be dropped down long shafts to underground streams below. We can imagine that crocodiles and serpents were on hand to feast of the human remains.

@deandddd , Aja Eka Pad is actually one of the MANY names of Lord Shiva/Vedic God Rudra - though it's not clear how it's correlating with the Chinese culture . In Hinduism , the Sacred Mount Kailash of North-Western Tibet , is considered his secret abode...

I have read of some connection between Aja Eka Pad and Shiva. So he must be like Rudra, then, a different mood of Shiva.

Well, Shiva relates to destruction, and the Tibetan underground is trying to destroy the USA, so I'm not surprised that Mount Kailash in Tibet is his secret abode.

Dean, this 1969 book is an amazing find, thanks so much for sharing! You can download it here by hovering over the PDF links. I would suggest using the one that says "PDF WITH TEXT" since it will be searchable via OCR (Optical Character Recognition) text embedded in the document: 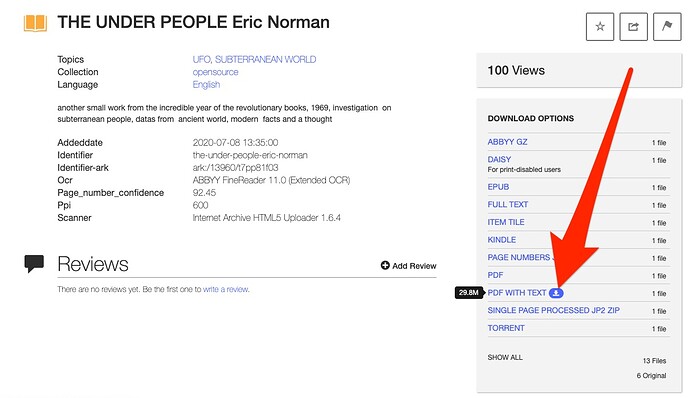 Yes, I have been able to download the book. It was all rather quick, to tell the truth.

You know, I've finished the first two chapters, and on one hand, I notice that this Eric Norman has some strange opinions about Colonel Fawcett's final ending that he cannot at all substantiate. I was wondering "Who does this guy think he is?". And he confuses the Tibetan underworld and the hollow earth at one point.

So I think that it's this way with most underground world books, some confusion, and some jewel of info that you never saw.

But the reading is nice, it's relaxing and informative.

About this book The Under People by Eric Norman ... I think it'a a matter of having to dig through it to get to some jewels of info and to pick up a concpet or two. I believe it is worth the effort, and the reading is quite interesting.

Let me run the first sentence of Chapter Three by you all: "For more than thirty years, Reverend Irene Farrier of Charlotte Michigan, has studied the enigmas of the Under-People, the hollow earth, the UFOs and the mysteries of Man's psychic abilities. It was in the course of such study that Reverend Farrier encountered Mrs. Margaret "Maggie" Rogers, a remarkable woman who claimed to have spent more than three years with a highly advanced and benign culture whichflourished below the Earth's surface."

Well, to tell the truth, Chapter Four looks a little more interesting, it's about Atlantis, and I might make a comment after I read it.

And as far as the rest of Chapter Three is concerned, "I dunno about that", but you never can tell. Which is neither here nor there.

What I would like to know, though, is the following: What ever happed to this Reverend and this lady Maggie? In the seventies, there was a whole hollow earth/underground worlds movement going on, nothing exactly overwhelming, but it was going on. It existed. There were people trying to do things. Dr. Raymond Bernard (pen name) wrote the book The Hollow Earth, which is still very valid and significant.

And then there was very little until almost the turn of the century, when Jan Lamprecht came on like gangbusters with that book of his. But there were few people to be links, who kept pushing it, from those times to the times of Jan Lamprecht. I can think of Dennis Crenshaw, maybe Rod M. Cluff, I have no idea when Rod started, nor what got him started, but he was there during the ninties, at lest, and has always been active on his own, and I guess Branton, who is more involved with cavern worlds than the hollow earth (from what I gather).

But a lot happned before. Besides the Raymond Bernard book, there was a whole hollow earth commune in southern Brazil; you know, like a hippie commune in the USA back then. And then Raymond Bernard disappeared, and nothing, nobody remained in contact between the two. There has been no contact with the group in Brazil. I was told by a Brazilian lady once that the group tried to keep it going for a while, and tried to make contact with Raymond Bernard's group in the USA; and Dennis Crenshaw told me that, in the USA, they wanted to keep in contact with the group in Brazil, but that they had no way of doing so. They were mutually incomunicado because of the language. And the Brazilians ended up selling the land that they had their commune on, and then it all dissolved.

Anyway, the hollow earth/underground worlds community doesn't have a good track record insofar as keeping it all together, you know? And now we seem to be heading towards times of transition and nobody really knows exactly what things are going to be like. The upshot? A few of you should take on at least a bit of responsibility; or even more, someone could jump up and do something dynamic.

Anyway, the minimum is for all of you to start downloading information and accumulating a few hard copies of books. We should at least conserve some information to pass it on to the next generation.

I say this because, as you all have seen from the past, after Ramond Bernard disappeared; losing it can be no more than a generation away.

And don't start a year from now, start now. It seems that time is of the essence .

After a short delay, I am back to reading the Under People, by Eric Norman. (Not exactly ground-breaking, buy informative and a nice read)

One thing I came aross in Chapter Four, at the bottom of Page 63, the top of Page 65, was a comment about the strength and extent, the far reach, of Atlantis. The comment was from Timaeus, which I had read a couple of years ago. The comment, which Plato passed on from Solon and before him from the Egyptians, was: "History tells of a mighty power which was warring constantly against the whole of Europe and Asia. (Northern Africa) I never thought about their extension and reach but, apparently, even before the catastrophe, Atlantis could make war with "the whole" of Europe. One has to go there in order to do that. So they were way up there, and believe that the present day Irishmen were are their direct descendants. The Irish have folklore that tells that the origin of that race was out in the middle of the Atlantic, and that it sank into the sea. They do not have the detals right, but they have the general idea.

I had always thought that the Atlanteans must have worked their way up through Europe over time, and that they had maybe reached Irelanda few thousand years later. But this statement is pointing out that the Atlanteans were already up there before the catostraphic struck.

You can see that we have the book on the May 13th posting above.

Anyway, reading is a matter of sighting through the available evidence. Do download it.

If you have any problems downloading it, write me.

Plato also related, near the very top of Page 65: "This powerful nation roared forth from The Atlantic Ocean; in those times, the ocean was navegable".

Well, The Atlantic Ocean is still navegable, so Atlantis was not located in what we call the Atlantic. And there were ten Atlantean cities, colonies, and there certainly weren't ten of them out in the Atlantic. But ewveryone accepts that Cadiz was one of the Atlantean cities, and it qualifies as being out in front of the Straits of Gibraltar. It was named after one of the sons of Atlas, and is quite near to the copper mines that Plato mentioned, near Tartessus, another town that Plato mentioned.

But the Sahara could have been what Plato referred to as an ocean, and it was navegable at that time, at least until that Atlanteans deflated that portion of the lower extention of the Atlas Mountains due to mining activities. This deflation caused the water of the Sahara (Triton Sea) to flow out over the top of the now deflated/sunken city.

So this is another indication that Atlantis was not out in the Atlantic, because the Sahara/Triton Sea was navegable and then not navegable.

So Chapter Four of The Under People has a lot of good information which has already been selected from the writings that the Greeks left about his talk to the Greeks on Atlantis.

This book is downloadable from Mindreach as per the post on May 14th, above. I have the downloaded file, and I think I can send it. The book was copyrighted in 1969, so the copyright has lapsed.