The Sanger California Dragon (or Pterodactyl)

I used to live in the Fresno California area before the turn of the century. I'm very curious if others have seen a "beast" that I'm about to mention as well.

One evening in the late fall of 1997 I was driving a friend home to Sanger, CA after we'd been in Oakhurst earlier in the day. It was getting late, around 9:00 or 9:30 at night when my friend started screaming hysterically about a silhouette in the sky. I couldn't understand what was going on and immediately popped on my hazard lights and pulled over to figure out what on planet Earth could be wrong.

My blood ran chill. To my utter horror I saw the scariest sight I've ever witnessed. Flying above us, lit by the moon, was a DRAGON. It seemed to be high, but there were no trees or anything to give proper perspective. This monstrosity was enormous. It was absolutely not a bird since the moon glinted off of it and I could see that it was "shiny" and very much lit in such a way as to show that it was very big.

I have to say my gut tells me it was as large as large as a grey whale. I've seen these many times off the coast of California. It had that same "feel" to it when I saw this hauntingly/terrifying (and somehow majestic) creature gliding through the sky. It would flap off and on, but it seemed to be gliding more than anything for the time I saw it. The wings seemed perhaps translucent, but I couldn't tell entirely since it could have just been the moonlight lighting them.

I just can't say it looked like pterodactyl depictions I've seen. There was something that was much more "dragon-like" about it...

The creature appeared to be flying towards the Oakhurst/mountains region.

My friend was insane for at least an hour afterwards and I had to drop them off with family since they could not tolerate being alone after this out of this world experience.

Has anyone experienced or heard of such a sighting before?

Hi , thanks for sharing - this sounds incredible . Are there any known cavern systems in the general area where this sighting occurred ?

I am thinking , this creature - whatever it is , is able to hide away in caverns , which is why it is such a rare sight...

The only thing that vaguely resembles this creature was a dragon-like flying reptile , once seen in the Namibian desert .

Humm! I've never really looked into caverns in the region here. I suppose there are since these are the very rocky Sierra Nevada Mountains. There is Crystal Cave. There is a chance I was screwed up in the direction it was going too because I might have been thinking I was looking westerly when I was looking easterly. It was so flat and jarring that I now am thinking back and looking at the maps so I could have been screwed up. If this is true it could be going in this other direction. Here is a map to illustrate the area: 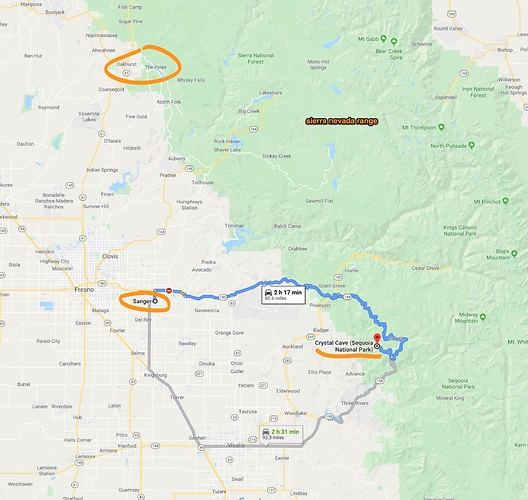 Everything is rocky and mountainous so there could be caverns everywhere really.

Here is something from the Jerome C lark book. He tells of the location of the flying snakes in Africa:

Hello Dean. Thank you for that. The thing that bothers me is how these are called snakes, but this was definitely NOT a snake. I guess it could be snake like since it had seeming scales, but I would have to say it was bulkier in my view. Not like the Chinese dragon style, but more of a body.

I got to thinking about this more and maybe they used the word snake simply because they didn't have a way of describing it any other way at the time. So maybe snake doesn't really mean exactly what we think of today in society?

Hi , I am truly fascinated by the key factors in this incident , especially the proximity to cavern networks .

Let's get analytical about it - so , do the native American tribes of the American Southwest such the Hopi or Anasazi tribe , have any traditional legends describing such a creature ?

If yes , that would provide a very strong point of validation for this sighting . I am aware of at least 2 such legends of these tribes about mythical flying creatures :

What do you think about this idea ?

This is an extremely interesting story and consideration. Apparently there are tales of dragons amongst the native Americans. There's the Piasa Bird (Wikipedia) of the Illinois region, for example. And here's an interesting list of others (this one is for North America, but there are lists from around the globe): 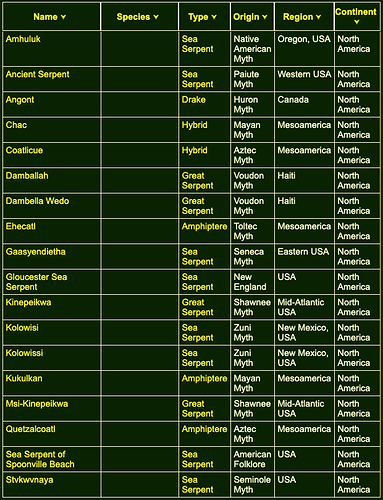 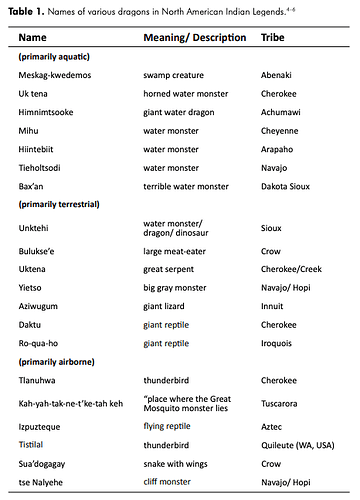 I found the following very interesting in relation to southern California (although your story is really more of a central California sighting) regarding pterosaurs:

A few years ago, I received a number of sighting reports from Southern California, and the following words and phrases were sometimes used:

The descriptions of the flying creatures led me to believe that they had seen living pterosaurs, even when some of the sightings were in populated cities in Southern California. These animals are not at all confined to ancient legends or in remote wildernesses where people rarely venture. They fly whenever and wherever they chose to fly, although they are generally mostly nocturnal.

Aside from this being non-isolated, it also appears that it is happening a good bit in various places including California (apparently they're calling these pterosaurs "ropen" as per this book (archive, older archive):

Patty Carson, of Southern California, said, “It did have a tail and it had a diamond shaped tip . . . The skin was a leathery, brownish reddish color. It had little teeth, a LOT of them.”

As I was poking about I also found this to be interesting: Herodotus also documented "flying serpents" (See: The History of Herodotus, Book II, #75 & 76):

"There is a region moreover in Arabia, situated nearly over against the city of Buto, to which place I came to inquire about the winged serpents : and when I came thither I saw bones of serpents and spines in quantity so great that it is impossible to make report of the number, and there were heaps of spines, some heaps large and others less large and others smaller still than these, and these heaps were many in number."
"The region in which the spines are scattered upon the ground is of the nature of an entrance from a narrow mountain pass to a great plain, which plain adjoins the plain of Egypt;

"and the story goes that at the beginning of spring winged serpents from Arabia fly towards Egypt, and the birds called ibises meet them at the entrance of this country and do not suffer the serpents to go by but kill them. On account of this deed it is (say the Arabians) that the ibis has come to be greatly honored by the Egyptians, and the Egyptians also agree that it is for this reason that they honor these birds."

The quotation goes on to describe the ibis and then continues on with the description of the winged serpents as follows:

"As for the serpent its form is like that of the watersnake; and it has wings not feathered but most nearly resembling the wings of the bat . Let so much suffice as has been said now concerning sacred animals."

I wish our mainstream researchers would always cross check any such anomalous findings , with legends of the natives in any given area where such anomalies are discovered . Invariably , it will provide vital clues to further that research work . What happens instead , is that they just dismiss out of hand , the native traditional versions , which is a BIG blind spot in mainstream research .

Video of a supposed dragon in China & Pennsylvania Cryptids & Cryptozoology

An interesting share from @watash of a supposed dragon sighting in China: And then again at 2:26 into the video there was a second sighting in Pennsylvania, USA: https://youtu.be/bTeL8zZjNSA?t=146

The above video reminded me of this topic. A supposed dragon or pterodactyl sighting in China:

At 2:26 into the video there was a second sighting in Pennsylvania, USA: https://youtu.be/bTeL8zZjNSA?t=146

@Soretna , to me this looks like a flying serpent creature due to it's slender body - the subject of many legends from around the world . Maybe it's a different species altogether !

True. While I'm not convinced the video is authentic footage, it does remind me of the "large flying snake" of Nambia, Africa: prehistoric creatures are still with us (http://www.holloworbs.com/Flying%20Snakes.htm)