The Great Mormon Migration of 1847

Folks , I am wondering why this event took place in 1847...? That timeline was significant - not too long after the disappearance of William Morgan and the Hollow earth evangelism of Symmes...the Hollow Earth was quite a prominent idea even in 1847...a famous Hollow Earth believer such as Edgar Allan Poe (with Mormon friends) was still alive at that time - any thoughts , comments about the possible correlations of this event to the idea of Hollow Earth ? 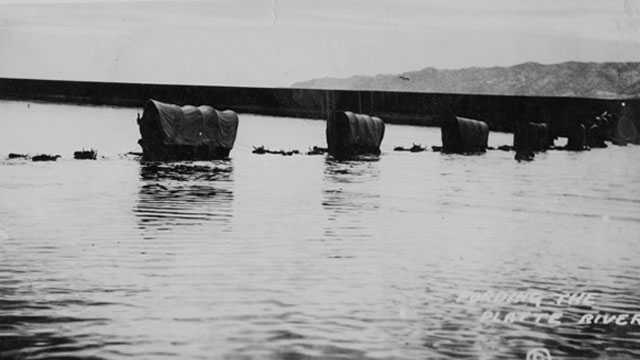 They were a people who felt called by God, chosen to create a New Jerusalem. It was fitting, then, that in order to realize the dream, the Mormons endured a 1,300-mile journey of Biblical proportions. 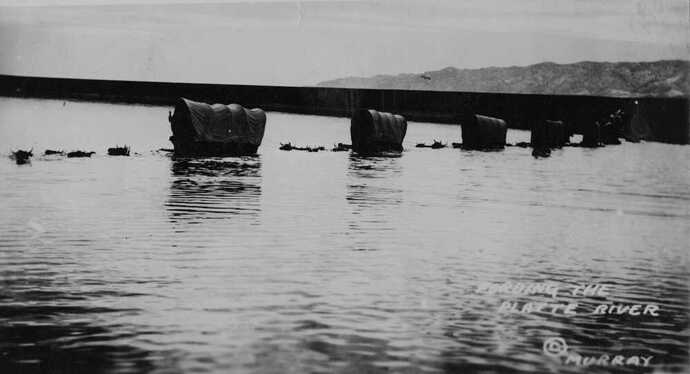 They were a people who felt called by God, chosen to create a New Jerusalem. It was fitting, then, that in order to realize the dream, the Mormons endured a 1,300-mile journey of Biblical proportions.

Time to Go
Mormons had been considering moving west -- beyond the borders of the United States -- since before Joseph Smith's 1844 murder, but his assassination made it clear that the period of relative calm the Mormon faithful had enjoyed in Nauvoo, Illinois, was coming to an end. In 1845 mob violence against the Mormon community increased, and the Illinois legislature revoked the city's charter.

Exodus, Part One
Brigham Young, who was emerging as the church's new leader, conducted a census that fall, counting more than 3,000 families and some 2,500 wagons. He then divided church members into smaller administrative groups of tens, fifties, and hundreds (following the pattern described in the Old Testament when, after crossing the Red Sea dry-shod, the Jews went through the wilderness searching for the Promised Land). Appropriately, Young named the collective the Camp of Israel. Although Young hoped to begin the migration in spring 1846, local hostility forced the Mormons' hand. The first wave of about 3,000 people began to leave Nauvoo in early February, and their suffering was intense. They crossed the frozen Mississippi River -- dry-shod. In one evening on the trek nine babies were born, their parents barely able to provide any shelter from the elements. Wagons collapsed, people died from exposure, and it took 131 days for the Mormon convoy to travel 310 miles to relative safety on the banks of the Missouri, where the river divided Nebraska and Iowa. Still, church members kept the faith throughout their tribulations. William Clayton, who had been ordered to travel ahead of his pregnant wife, was so overjoyed to learn of his son's birth that he wrote a hymn, "Come, Come, Ye Saints," that has become a Mormon standard. Its hopeful last line: "All is well! All is well!"

Winter Quarters
All was well for a time in the area (near what is Omaha, Nebraska today) that the Mormons reached in June 1846. Local Native Americans were friendly, and Young decided they would remain in what became known as "Winter Quarters" until the following spring. But when winter came, scurvy claimed as many as 15 percent of the camp members; Young's son would later call their settlement "the Valley Forge of Mormondom." Young, himself sick in February 1847, had been plagued by self-doubt, but a vision of Joseph Smith helped him become the strong leader his followers needed for the second, thousand-mile portion of their journey.

Exodus, Part Two
In April 1847, an advance party of 25 wagons led by Young left the Winter Quarters and headed towards the Rocky Mountains. They traveled along the Platte River, creating a new route on its north bank rather than risk encounters with other settlers on the Oregon Trail. The first half of the journey was along the plains and easier going than the mountains that loomed up past Fort Laramie, Wyoming. But the Mormons kept going, marching by day and leavening the evenings with campfire dance and song. There was also much sickness. Like many others in the pioneer band, Brigham Young came down with "mountain fever." On July 24, after 111 days of travel, a wagon carrying the prostrate Young reached the valley of the Great Salt Lake. Looking out on the terrain, Young declared, "It is enough. This is the right place."

A Permanent Home
As Young was reaching his destination, another wagon train with more than 1,500 people and nearly 600 cows was leaving Winter Quarters and heading west. Over the next two decades more than 60,000 Mormons would journey to the Utah Territory; thousands came by wagon, and thousands more pulled handcarts across the harsh terrain. Many died along the way, and the survivors found the country they sought to escape would soon expand its borders to encompass them. In 1857 during the "Utah War," the Mormons abandoned their Salt Lake City homes as the U.S. Army approached, but returned to them unscathed and would never again be forced to flee for their lives and abandon everything they knew; for the first time, they had found a permanent home.

@sidharthabahadur Hmmm, I don't know of any specific correlation of this event to the hollow earth. The Mormons (Latter-day Saints) were leaving the United States due to heavy persecution that came as a result of their religious beliefs. The timeline is fairly close to William Morgan (and as we've documented previously on older posts, there was a connection between William Morgan's wife and Joseph Smith). However, I don't know of any specific connection between this exodus of Mormon pioneers, and the hollow earth or William Morgan.

But, I've heard a rumor from a friend that these pioneers once found an underground temple somewhere in the American West after they settled, but I've been unable to locate any source for this story, or any substantial specifics about it. So at present this remains only a rumor, unfortunately.

Thanks @Ephraimite , one reason why I thought there might be a linkage is because the Mormons were migrating away from Illinois (which has major cavern systems)...Harry Hubbard in our times probably has the best view of secrets hidden in the Illinois cave systems . Wonder what he thinks about this ?

@sidharthabahadur Gotcha, I see. Always good to think outside the box

To my knowledge, Harry has never stated anything regarding the Mormon migration away from Illinois in context of the caves there. The Mormon settlements were mostly on the far west side of the state, a good distance away from the Burrows Caves or any other major caves (that I know of).

Again, as far as I know, the main impetus for migration was due to Joseph Smith's assassination at Carthage Jail by a mob. The governor's forces were also attempting to take over Nauvoo and disarm the citizenry, making this migration necessary (or else more bloodshed would ensue).

There is a large body of evidence to indicate that this mob was directed by Freemasons / illuminati-aligned forces, so maybe cavern forces were also somehow involved in directing the affairs of the assassination. But I have no solid evidence to support a direct connection with subterranean forces in this context.

Here is a good video summarizing the Masonic conspiracy I mentioned: Saturday, February 15, 2014 – Masons and the Martyrdom, Priesthood and Succession - YouTube

You know @Ephraimite , the first person to be "awarded" sainthood (posthumously) by the Mormons was none other than William Morgan...not just that , Morgan's widow later became one of the plural wives of Joseph Smith himself...not surprising therefore , that it made Freemasons opposed to Mormons...hmm !

@sidharthabahadur Yes, that's true. Furthermore, the Book of Mormon describes the intrigues of an ancient secret society in America called the Gadianton Robbers, in addition to other secret societies of the antediluvian Jaredites. These secret societies spawned all sorts of horrors, including: human trafficking, cannibalism, Satanic oaths, societal chaos, economic crises, governmental corruption, numerous wars, internal collapse, and ultimately the extinction of two nations. I think the Masons became uncomfortable in realizing this book painted a very clear circle around them...

As explained in the above-linked video, Joseph Smith's later involvement with the Masons was entirely out of political prudence, and for the protection of his people. He was well-aware of their inner workings and his refusal to stay under their command was what led to their plotting of his death.

@Ephraimite , I am now mystified by this conflict of Freemasons and Mormons...my hunch is it had a deep impact on the history of the USA - more than most people realise .

On one of my earliest trips to the US , the first time ever I came across references to these two entities is when I found a "Freemason Bible" or a "Mormon Bible" , kept inside the bedside drawer of Hotel rooms in the US...at that time I used to wonder what Freemason or Mormon even means !

Your remarks are intriguing @sidharthabahadur, but I think some details are missing. First, the "Mormon Bible" is not the Bible and should not be referred to as such insomuch that it is considered and believed to be another record of Jesus Christ and His dealings with people in the American (specifically North America; eastern and central US and up into Canada) continents. You may find the following edition interesting, which is a very well researched version that is supposed to be the most true to the original script available: "The Book of Mormon: The Earliest Text" Edition

I am not deeply familiar with Freemason texts, but as far as I have understood it they effectively use the King James Edition of the Bible with some kind of introduction to Freemasonry material with a questions and answers section prepended to the Bible.

I am curious about this topic... Joseph Smith, Jr. began his run in January 1844 for President of the U.S.A. (not sure how solid this article is, but it may be a springboard for research) and was doing exceptionally well in his campaign. This Wikipedia article talks of this, but I have not had time to read/vet it and thus not sure of the quality - since, as we know, most Wikipedia entries cannot be trusted carte blanche and without suspicion of ulterior motives driving their narratives and "research" agendas.

As I understand it, his early running was off to an exceptionally good start and the odds could have very much moved entirely in his favor for a win, but he was assassinated by the Freemasons et al in June 1844. I can nearly guarantee with certainty that if he would have won it would have dramatically changed (improved) the course of history and would have most certainly averted the Civil War.

I am sure that the Freemasons and their controllers and the "powers that be" did not want this... especially when you realize the designs of the Civil War were ultimately realized by and for some very specific folks who used it to split and then control the United States of America. Interesting - and deeply concerning - stuff for sure. It appears to align perfectly with the goals of Cavern Worlders and peculiar timelines regarding the schism between "folktales" and "modern science" and other patterns that can be detected by a study of history...

There are also interesting "rumors" of President Wilford Woodruff being assassinated (poison) by the Bohemian Club (Freemason connection) in September 1889 after grappling with some issues he very much struggled with due to threats/coercion/ultimatums being issued by said "Club".

So to address your original assertion, I might say that the migration / fleeing west was a side effect of much more insidious things going on than most realize...

@Soretna , your deep analysis has further strengthened my gut feeling that this was indeed a watershed event in American history , with far reaching implications...it was forgotten and relegated to a footnote in the history of the USA only because - very soon afterwards , the American Civil war broke out...!