List members , I figured out a different way of accessing this article :- 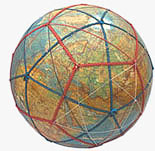 For the first time the hypothesis that the ancient megalithic structures may be located on our planet on a particular system, launched in 70 years, Russian scientists N.F.Goncharov, V.A. Makarov and V.S.Morozov. According to their theory , the kernel of the Earth is a growing crystal of iron, which brings in all the shells of the planet right symmetry of the two Platonic polyhedra - the icosahedron and dodecahedron, and the hierarchy of subsystems, the main division. On the tops of the crystal, just as the majority of seats and is situated the ancient civilizations, pyramids and other famous buildings. Although in this symmetric system really is coincidence with the location of historical sites, all of them is quite approximate. 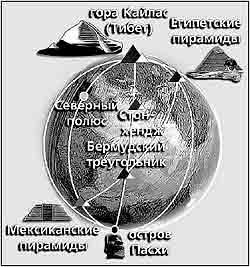 Then a famous Bashkir physician and researcher of ancient civilizations Ernst Muldashev offered his system of pyramids, in which he linked the location of Giza, Easter Island, Mount Kailash and a few other famous places. Unfortunately, the system was crude and could not stand the geographical test. But the great merit of Ernst Rifgatovich in another. Through his books not new, but rather fantastic idea, the presence of the location of ancient monuments, became very popular. Hundreds of researchers have begun their own investigations in this direction, and I must say have made ??very significant progress. The most interesting articles on this topic are available on our website under "Historical Geodesy" .

Thus, in the article " Jim Allison's Lines" have been described Great Circles joining some famous historical sites. One of them, the line of the Great Pyramid (GP) - Easter Island is a well-known figures in the desert of Nazca and many other sacred places. Moreover, the Nazca lies in the golden section of the line between the GP and its antipode. In addition, this line, which can be safely regarded as one of the principal, has a number of remarkable properties and laws, which will be discussed a little bit lower.

If to research more in this direction, and connect the most significant buildings of antiquity to each other by lines, as well as to their latitude and meridians, you will get a global network of lines covering the entire planet. In the process, the network revealed distinct patterns for the first time allow us to say that there are certain system in the arrangement of the pyramids, temples and other megalithic structures. 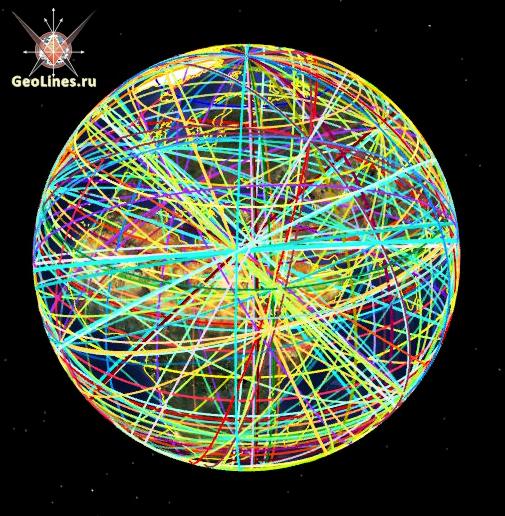 System of megalithic buildings505×516 76.2 KB
If to represent all great circles connecting these objects on the globe, we'll see at first glance, a chaotic grid of intersecting lines. But on closer study reveals many patterns, occasional occurrence of which is highly unlikely. Let's consider some of them.

If you look at the line from a great height, you can choose the number of global trends, which center of the intersection is the Great Pyramid at Giza.

A closer look reveals that most of the monumental historical buildings lie exactly on the lines connecting the main point. Moreover much of it is located at the intersections of the lines. Most surprising fact revealed a combination with the main lines to the location of world capitals. It turned out that most state capitals are also on the lines or meridians of latitude and historical sites. Especially in this distinguished Kazakhstan, which only recently, in historical terms, moved his new capital, Astana, on the latitude of Stonehenge. 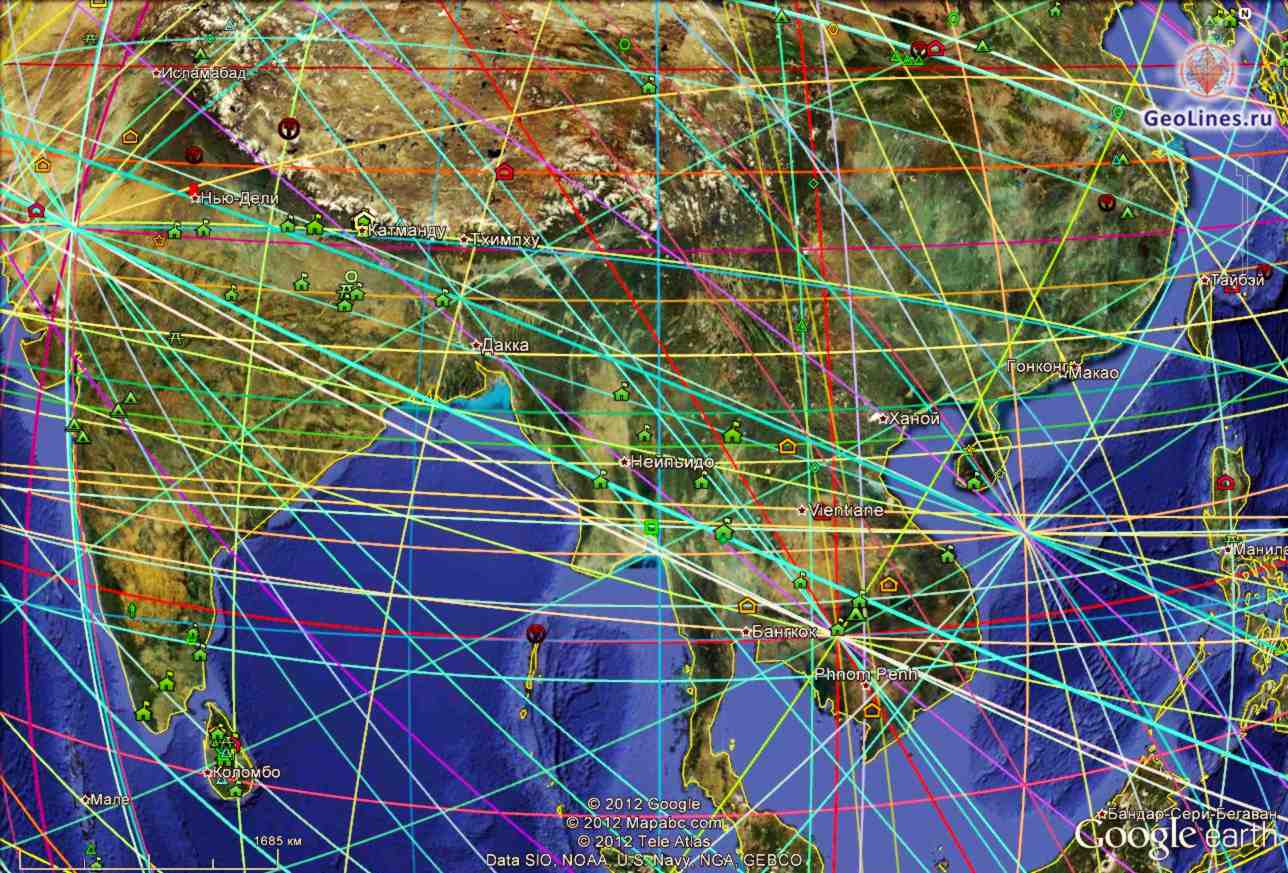 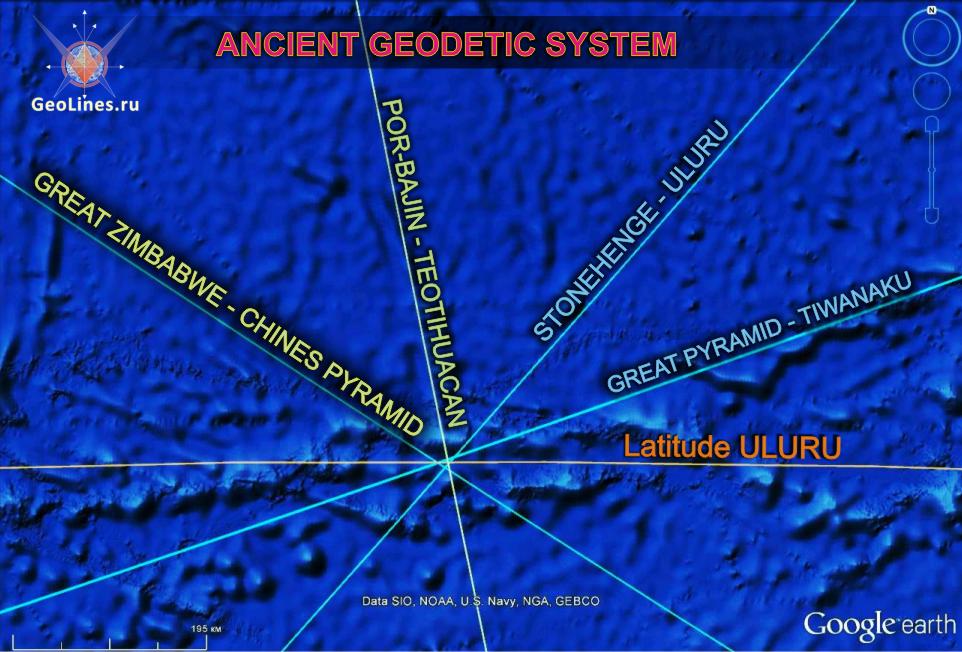 Another argument telling about the presence of a particular system in the arrangement of famous ancient buildings, is the intersection of the lines of Nan Madol - Uluru and GP - Nan Madol . These two lines intersect at the point of Nan Madol at an angle of 90 degrees (90.47 *), performing with several conditions. 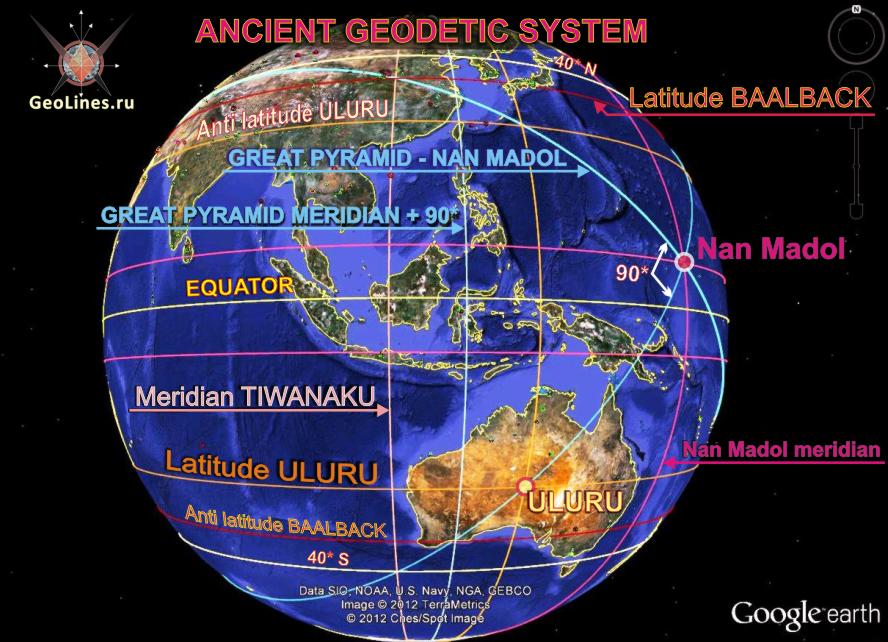 The image above shows that the meridians of Tiwanaku and the Uluru are symmetric with respect to the perpendicular of the meridian of the Great Pyramid (Meridian GP + 90 degrees), and deviate from it by 10 degrees. With this breadth of Baalbek and the antipode Uluru crossing meridians Tiwanaku and Uluru, form two adjacent squares, which is the general diagonal orthodrome GP - Nan Madol . For the line Nan Madol - Uluru situation is repeated and it is already diagonal four adjacent squares, formed by latitudes Uluru, Baalbek and the 40th latitude.

The following fact in itself can serve as proof of the existence of a certain system in the location of the most famous buildings of antiquity. The fact that the lines - Great Circle - Easter Island - Stonehenge and Teotihuacan - Tiwanaku are symmetric with respect to each other and thus are the diagonals of a rectangle 3660 x 3220 km (2000 miles), formed by latitude and meridians of Teotihuacan and Tiwanaku. 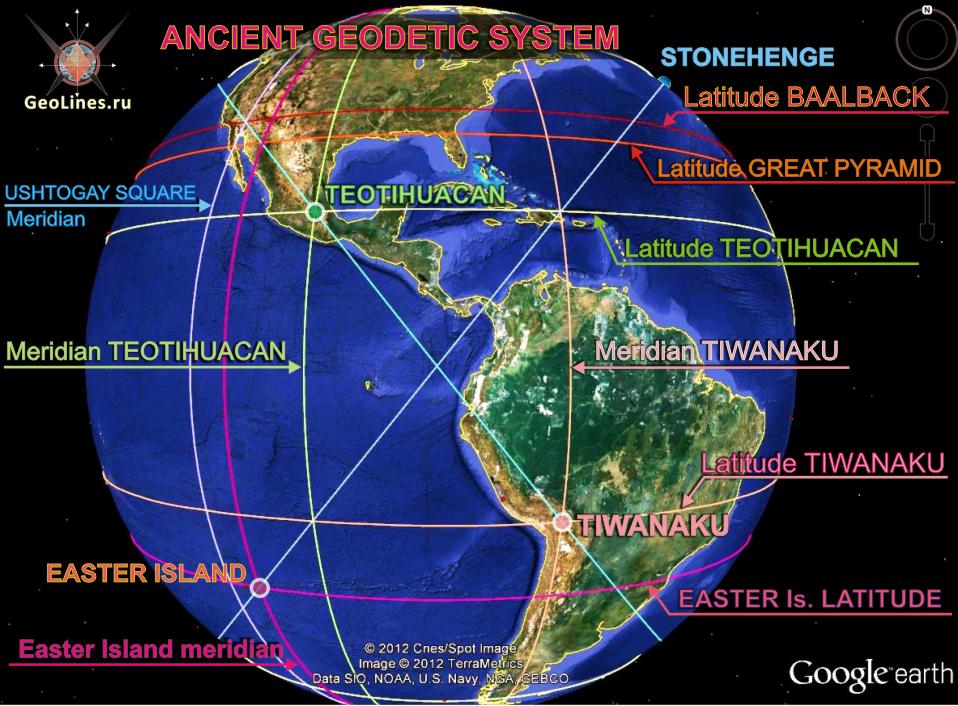 This reveals another very interesting point. It turns out the breadth of the Great Pyramid (29 ° 58'44 .77 "N) above the latitude of Teotihuacan (19 ° 41'58 .45" N) at 10 degrees, as well as the latitude of Easter Island (27 ° 7'16 .41 "S) above the latitude of Tiwanaku (16 ° 33 '17 .29 "S), for the same 10 degrees. Since the lines are symmetrical, and the distance between the same latitudes, the lines are the diagonals of two squares formed by the GP latitude, Teotihuacan, Tiwanaku, Easter Island and the meridians of the Teotihuacan and Easter Island. This interposition of the five most famous and significant buildings of antiquity can not be accidental, especially against the background of other laws relating these objects.

Another striking feature is the close values ??of the azimuths of the lines connecting some well-known historical sites. For example, the azimuth of the line GP - Stonehenge is 320.48 degrees, and azimuth of the line of Tiwanaku - Teotihuacan is 319.55 degrees. This means that viewed from the Great Pyramid to Stonehenge, it is still much to look at the pyramids of Teotihuacan, Tiwanaku. At about the same angle can be seen in the direction of Stonehenge, standing on Uluru - the azimuth of 318.62 . Azimuth directions of Easter Island to Giza and Stonehenge in almost all the same and equal to 264.72 and 264.82 degrees, respectively. This is explained by the difference of latitude of Stonehenge and the GP and the spherical shape of the Earth, but to explain this relative position of the three most famous buildings of antiquity mere coincidence seems to be very difficult. In addition to the value 264 close to the direction of a few lines. Because of the Tiwanaku to Nan Madol - 263.82*, from Mohenjo-daro to the Mecca - 263.31*, from Baalbek in the Tiwanaku - 263.93*.

In this review article devoted to the lines of the great circles are shown, and are just a few regularities in the distribution of historical objects, which is actually much more. Their careful study, organize, and search for principles of the system - in the future. But so far, the theory of paleocontacts and existence of the ancient planetary advanced civilization first real evidence to get the most incredible part. It seems that the famous pre-historic buildings are part of the ancient geodetic or navigation system, in which the pyramids and temples, along with other functions, serve as landmarks and reference points clearly visible even from space.

Folks , now just imagine what further insights could be gained by combining this knowledge with Mario Buildreps' concept of "Mathematical Holistic Orientation-based Dating Method" . To those unfamiliar with Mario's work , he uses just the location & orientation of ancient monuments - to determine their age :-