I have to say that sidharthabahadur and Dean have had an interesting observation / proposition in the post linked to here about Mercator's map of the North Pole:

What happened to Friesland? Ancient History

In a 1577 letter to John Dee, an English mathematician and astrologer, Gerhard Mercator explains (Princeton article) his depiction of the North Polar region:

In the midst of the four countries is a Whirl-pool . . . into which there empty these four indrawing Seas which divide the North. And the water rushes round and descends into the earth just as if one were pouring it through a filter funnel. It is four degrees wide on every side of the Pole, that is to say eight degrees altogether. Except that right under the Pole there lies a bare rock in the midst of the Sea. Its circumference is almost 33 French miles, and it is all of magnetic stone. . . . This is word for word everything that I copied out of this author years ago. [E. G. R. Taylor, "A Letter Dated 1577 from Mercator to John Dee," in Imago Mundi 13 (1956), p. 60.]

The Princeton article goes on to say:

The identity of the author cited by Mercator, a "Jacobus Cnoyen of Herzogenbusch," has never been established. Jodocus Hondius acquired the printing plates in 1604; later editions of the Hondius version of the map show the separation of Greenland and the re-drawing of polar coastlines, particularly in the Spitsbergen and Novaya Zemlya areas, as the demythologizing of the Arctic continued by explorers and whalers.

I find the idea of the water encircling the northern continents to be very interesting.

We have talked previously about the crust being much thinner at the poles (it really being an impossibility of having the same crustal thickness at the poles as of the equatorial zone) and there being MANY observations by many sailors and explorers about various openings. This certainly does go a long way to explain so many different experiences.

It is actually perhaps not only possible, but likely that the "islands" (in reality comparable in size to continents) are indeed from explorers/sailors experiences of going INSIDE of the "abyss" or into the various northern openings.

The Jansens perhaps experienced this and described it in their very limited perspective in The Smoky God.

Let's look at the map(s) again with this in mind: 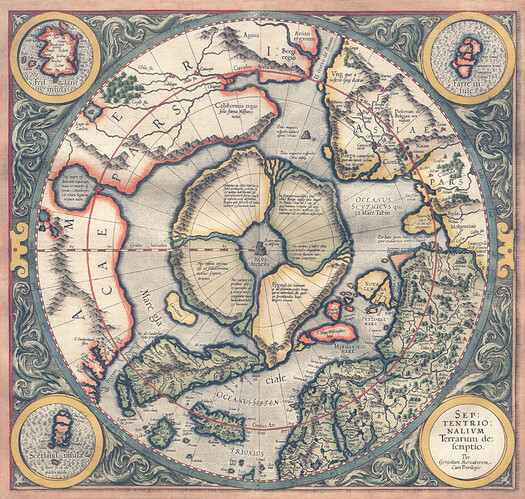 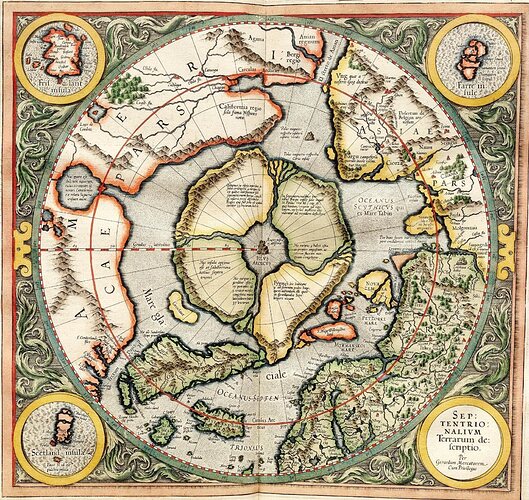 Different edition with missing shore on the Europe/Russia corner: 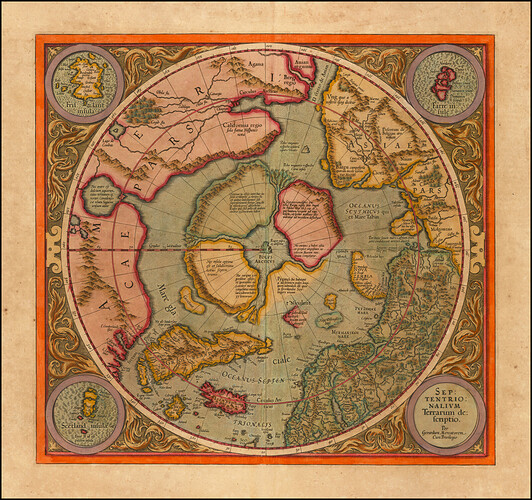 Larger full world (outer surface) view, but still having the North Polar presentation that could indeed be the inner continents northern edges or micronized version of them or such: 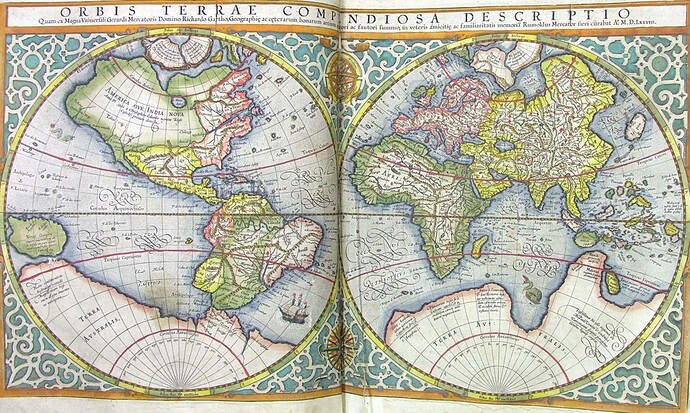 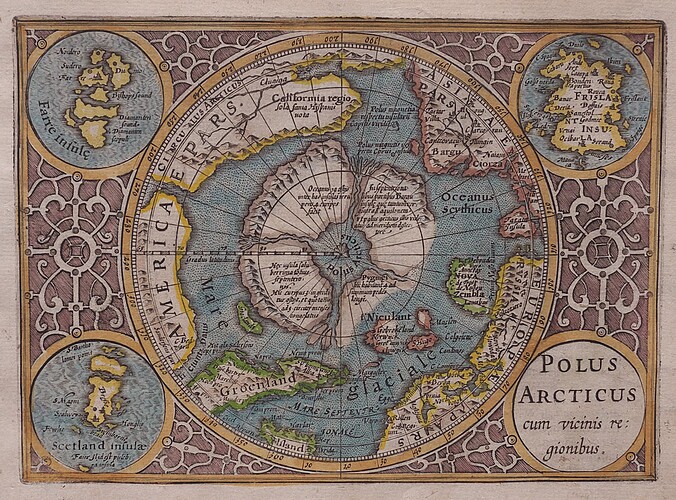 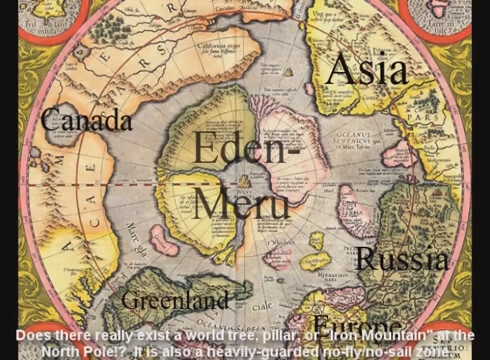 Wytfliet (1598) presented a similar or the same production: 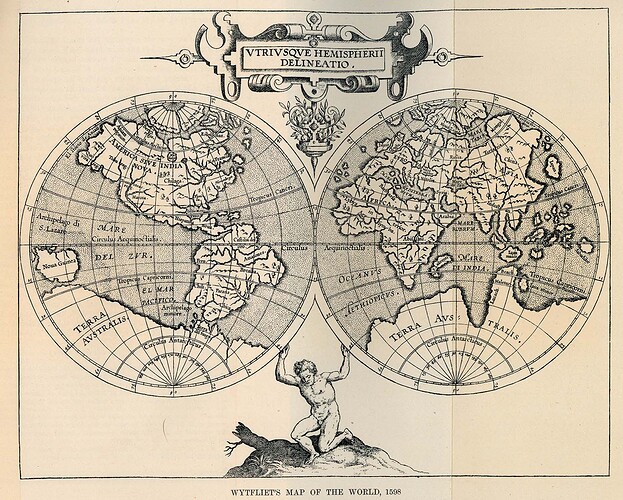 Additionally, I believe we should (at some point) make the effort to try to create a 3D model of the globe or at least the North Polar region with this concept integrated into it. At the very least, a sketch.

Found an interesting 1538 Mercator map that, appears to me, to be much less complete than other maps such as his 1569, etc.: 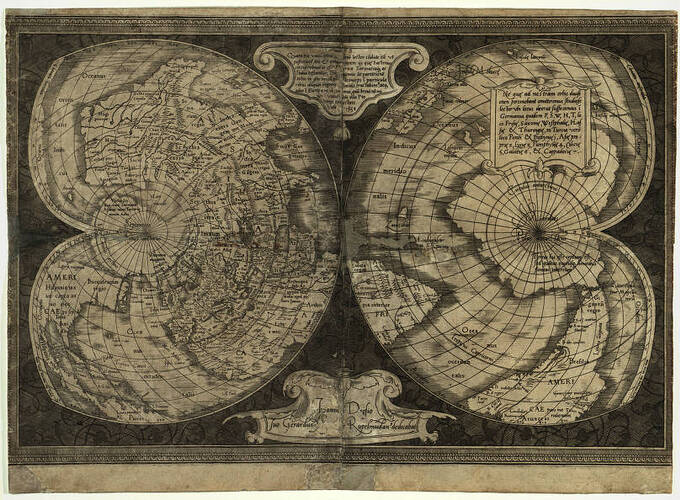 Some sites claim (example 1, example 2, example 3) that his earlier map is much more accurate than his map from just a year later. There are a few things that bother me about this. One is that textual content appears to be being lifted verbatim from site to site (do a search). Additionally, I feel as though there's an agenda at work here to cover the actual more accurate data.

As of late I have seen more and more evidence of the criticality of particular agendas needing to be met and fortified vs searching for the truth. I think we all are seeing this EVERYWHERE right now, but this was a strange observation and I thought I'd mention it and ask that you think on it as well.

@Soretna , I am absolutely thrilled to see this reference in Mercator's letter of the year 1577 , to John Dee about "a whirlpool in the midst of the 4 continents , where the 4 indrawing seas , spiral into the Abyss" .

The above statement echoes what is the in the Rig Veda in it's chapter on the Captive waters !

So , the Buddhist illustration of a whirlpool discharging water "upwards" (!!) UNDERNEATH/BENEATH the North Pole (NOT at the North Pole) , resonates exactly with the above description .

**I will go one step further - the actual , authentic meaning of ABYSS (and it's synonyms across cultures) in various ancient scriptures , was the North Polar Opening itself ! The Abyss (North Polar Opening) is the portal that connects Hollow Earth to the outer surface of the Earth . It was only in later times , that Abyss got confused with other ideas...

The Captive Waters - Arctic home of the Vedas ALLPLANETS-HOLLOW

Yes, consider this, the Greek: a-byssos a: without byssos: floor Sounds like a conduit or passage to me. Very simple. But I must ask: what happens if we break byssos down further? What can we obtain? I do not know if this reasoning has any meaning to it, but, I will continue: byssos supposedly has a Hebrew origin: בּוּץ - the letters: "beth / bayit", "vav", "tsadi" - pronounced: "boots" Here is a graphic of the letters without the dageshim (plural dagesh, dot multipliers) and with the t…

I think you also find the addition regarding "white / to bleach" in Hebrew thought provoking in this regard.

I cannot help but wonder with the discussion of The Abyss and its seeming clear connection with Sheol or Hell or Tartarus, Cavern World, etc., that perhaps the Tartar Sea (Mare di Tartaria) – that we now call the Arctic Ocean + Beaufort Sea + Chukchi Sea + East Siberian Sea + Laptev Sea + probably Lara / Kara Sea (and maybe Greenland Sea) – is the connected needed to understand the Tartar people and who they were or where they came from. Where they the original Vedic people who came out of The…