There's been some discussion of La Palma and the Canary Islands before, but I thought it may be worthwhile discussing what kind of cataclysmic situation we may be looking at right now with the activity we're seeing on the volcano at La Palma.

Some folks may have noticed some of the live feeds on YouTube. Last night it was really incredible watching a live feed that really showed remarkable levels of lava spewing. Several times while having the feed up there were audible explosions and the camera rocked and shook from obvious severe activity.

Today they're saying the houses around have burnt or are burning. I've seen several live videos that show the homes burning up. The dogs barking in the distance are worrisome because clearly people and pets are still around this incredible dangerzone. We're talking about tens if not hundreds of millions of people being in

Let's just catch our bearings as to where La Palma is and how it is oriented on the globe: 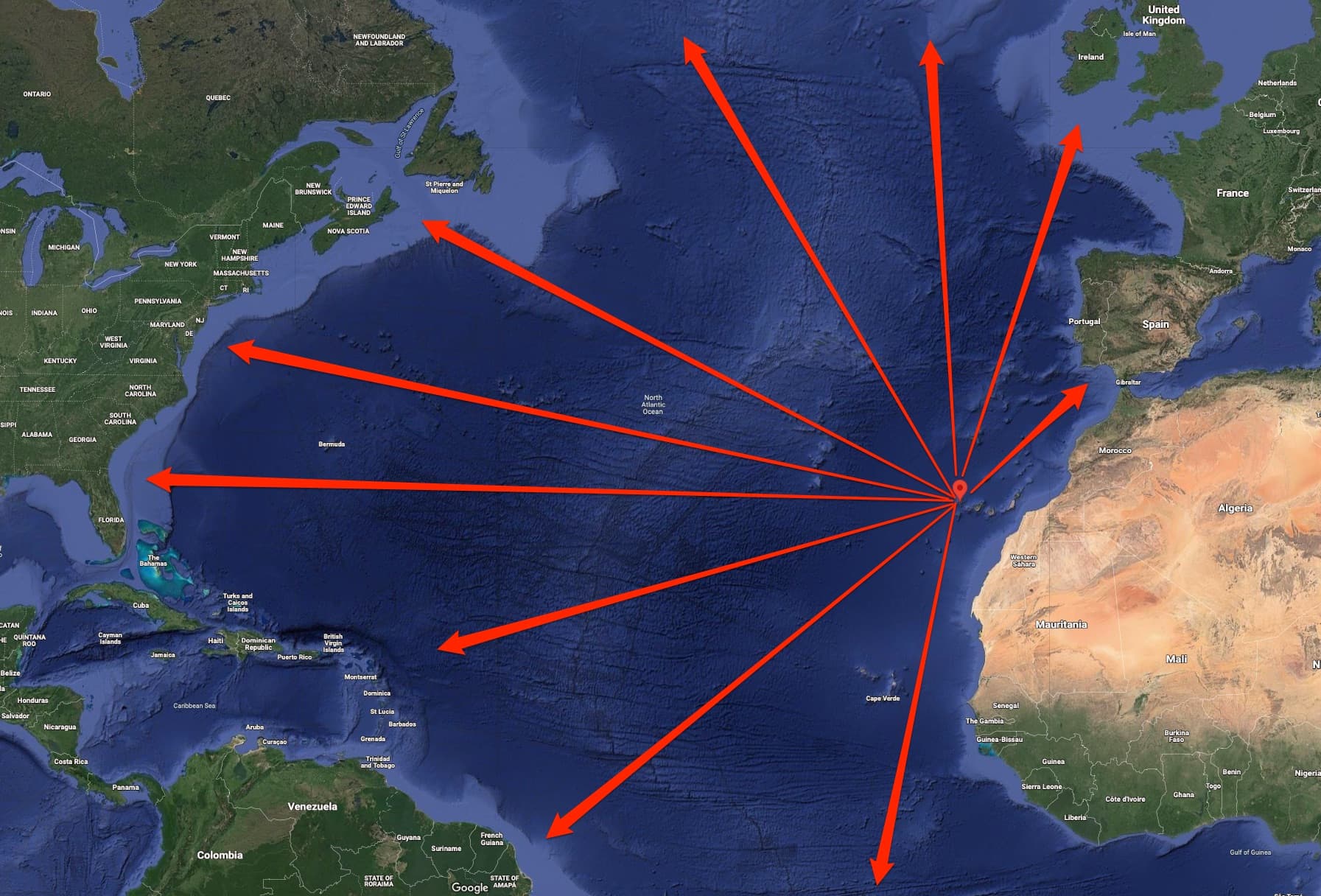 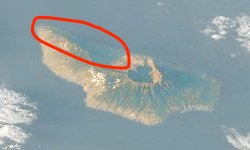 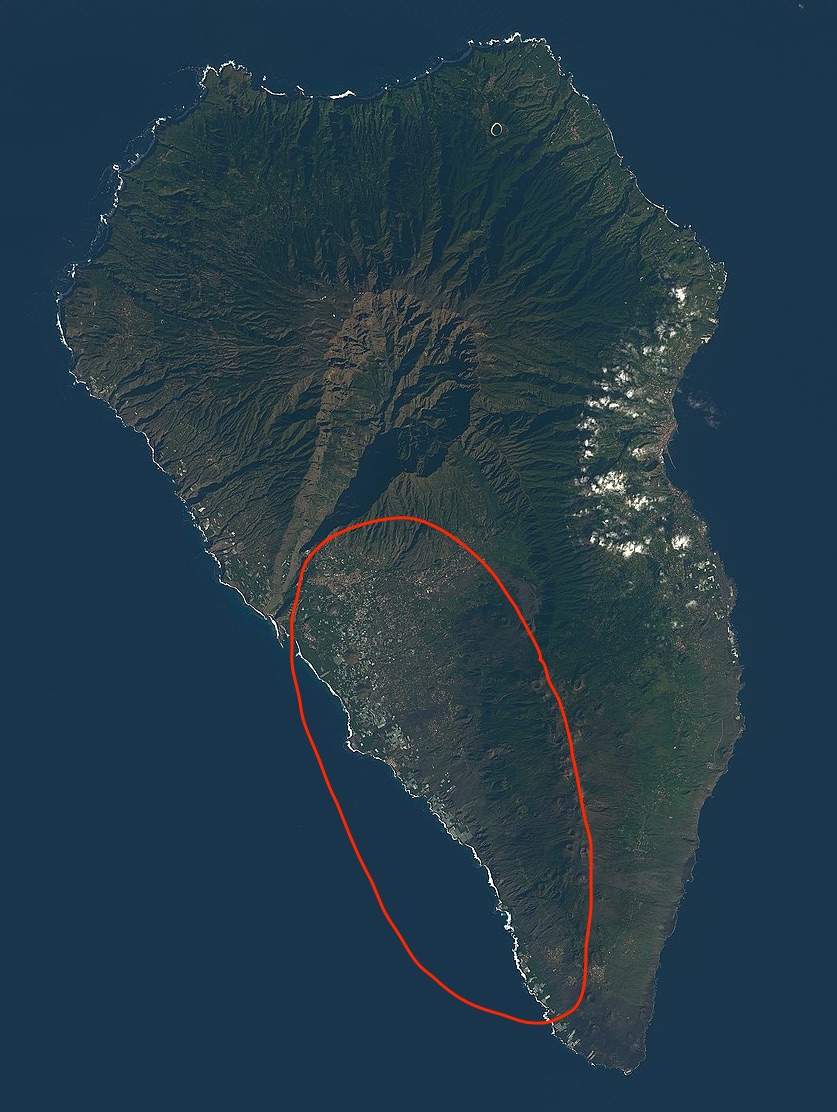 I think it merits some exploration of just what can happen if the western side of La Palma collapses into the ocean: 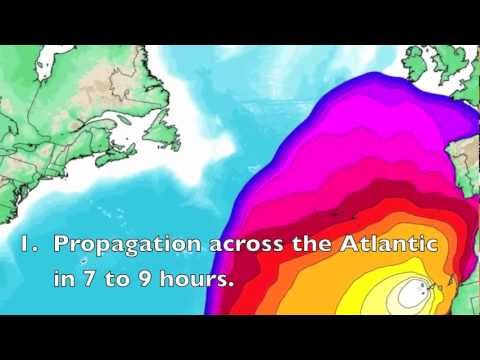 This is pretty impressive - and terrifying.

As you can see, there's not much time for evacuation for anyone within harms way, max seems to really be about 7 (maybe 8) hours for those on the East Coast of the USA: 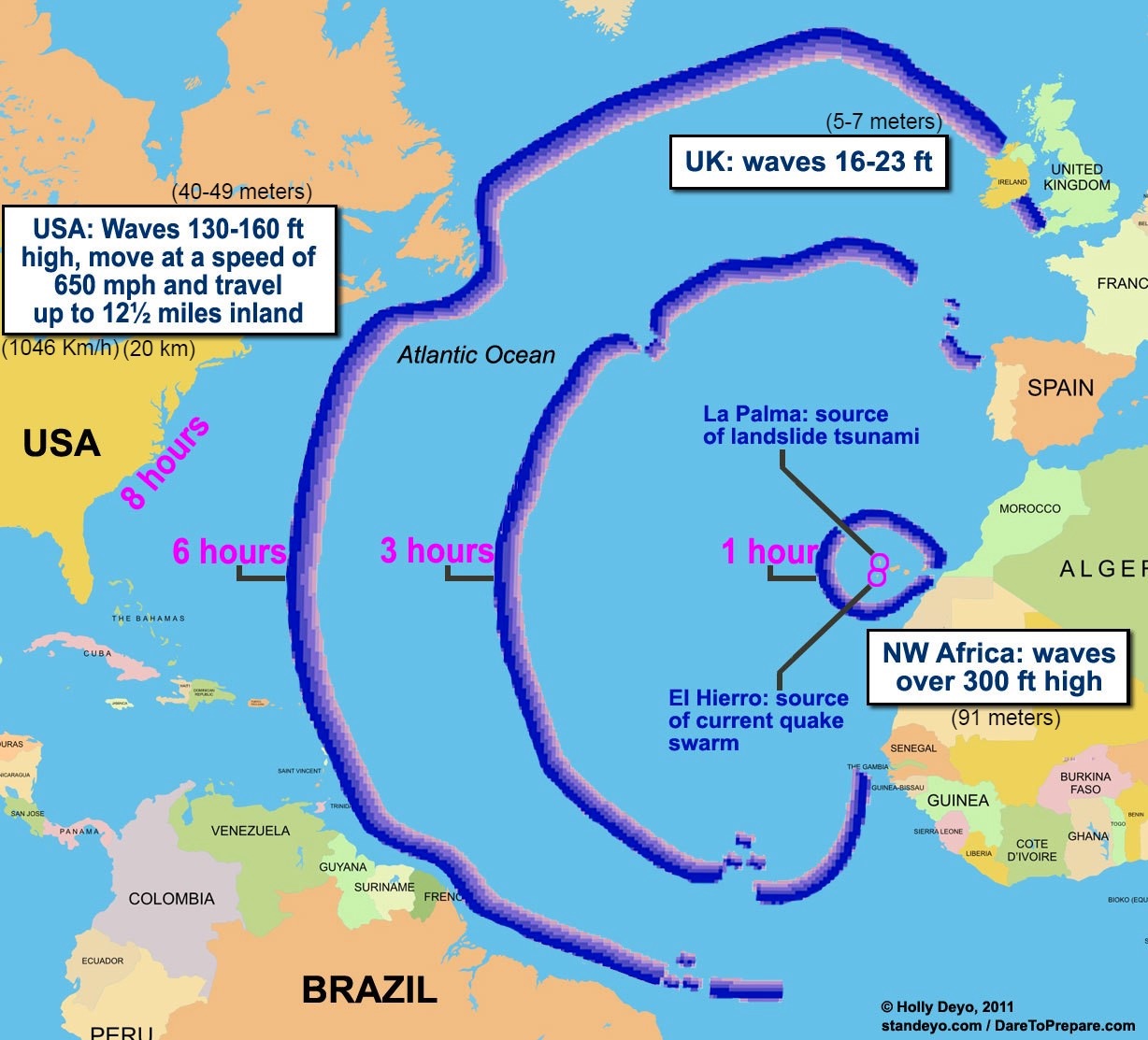 There are a LOT of varying predictions about how catastrophic this could be. The minimal amount of damage on the East Coast (being roughly the least destructive in a large population zone) is around 100 feet of water (30 meters), but it could easily be a MUCH larger tsunami reaching into the hundreds of feet.

At a minimum of 30 meters, just look at the flood map projects for the East Coast of the USA: 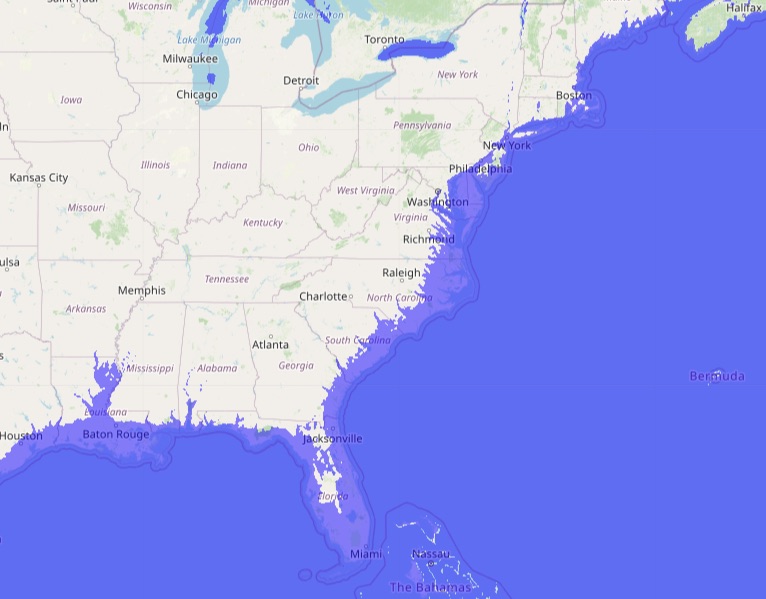 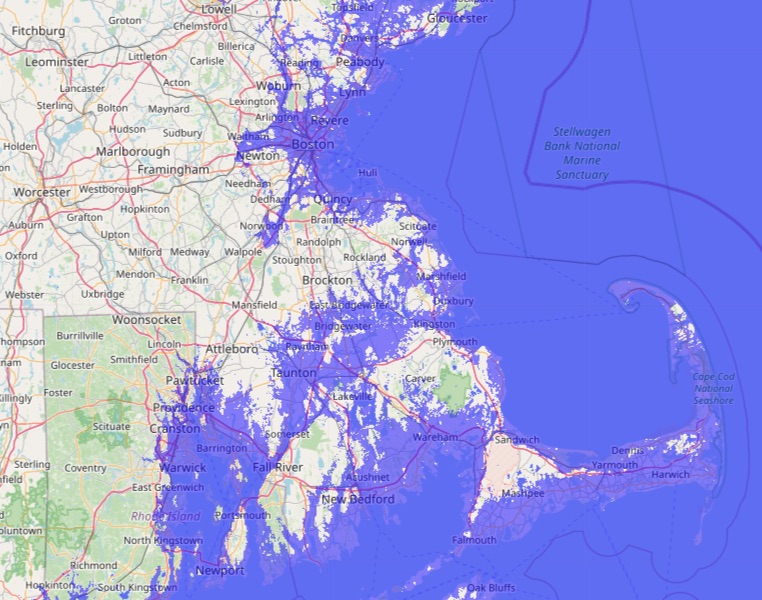 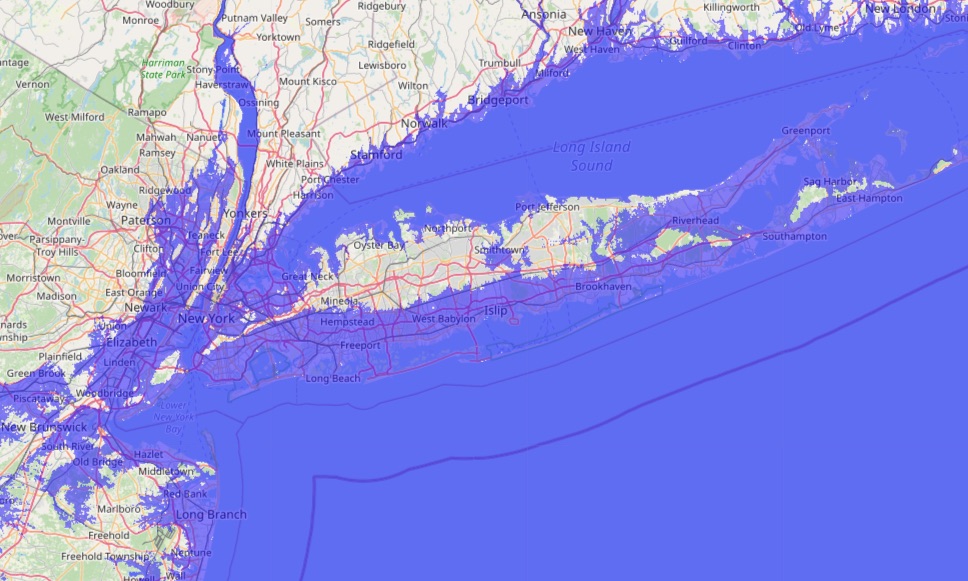 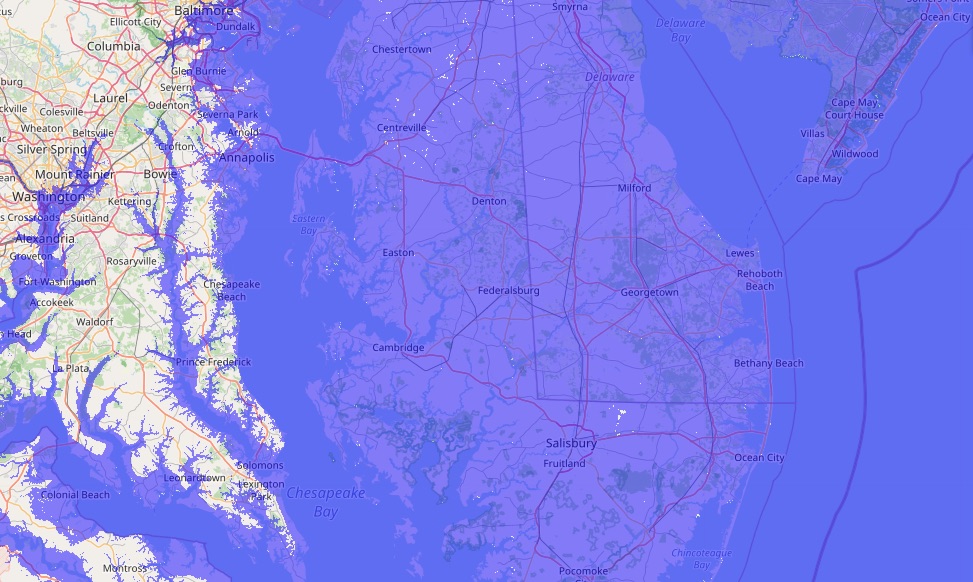 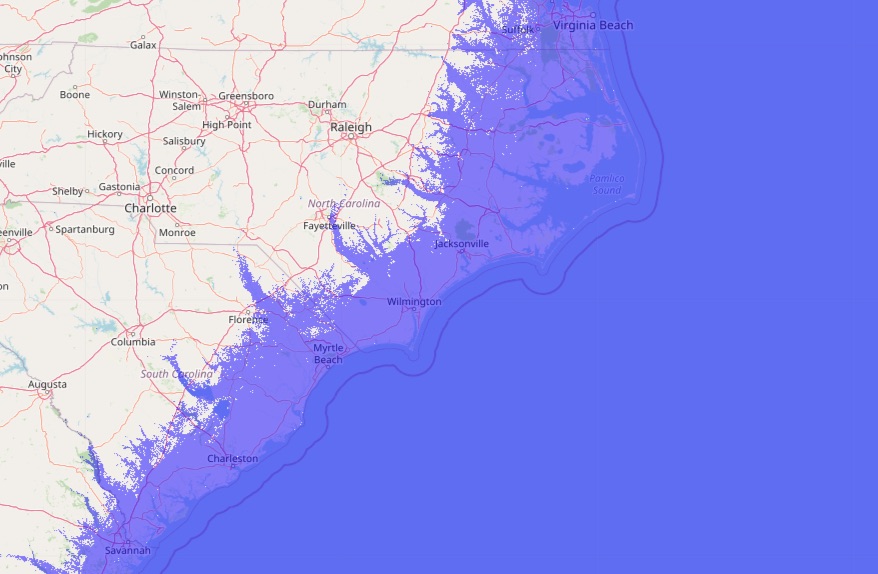 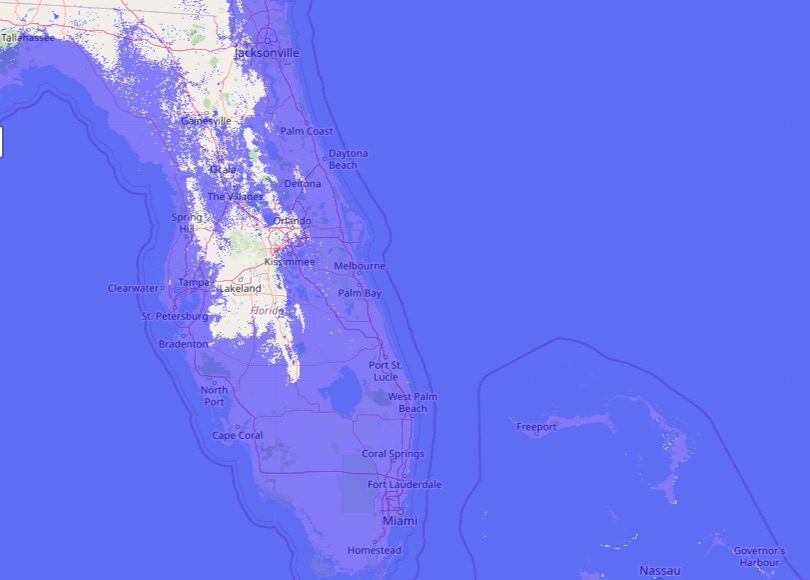 Just go on down to South America:

It seems like Spain, France and the UK might fare a bit better due to the higher cliffs and perhaps lower population cities on the ocean front. 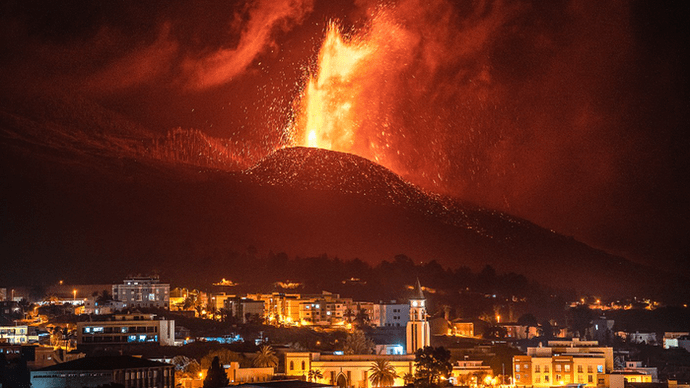 "La Palma airport is inoperative due to ash accumulation."

Yes, that area of the Canaries has been active since Atlantis. It is so hard to interpret what is going to happen. I feel so helpless lately anyway, with the political situation and all that, and now this.

If that volcanic mountain blows its side off, the tsunami will destroy the coastal areas of the East coast of the USA with 40 - 60 meter high waves.

And the Antilles and Puerto Rico ?

The Canary Islands' Cumbre Vieja volcano increased its eruptive force on Friday as a new fissure opened up.

At least three vents have opened since the volcano erupted on Sept. 19, but the latest one is being closely 'monitored.' 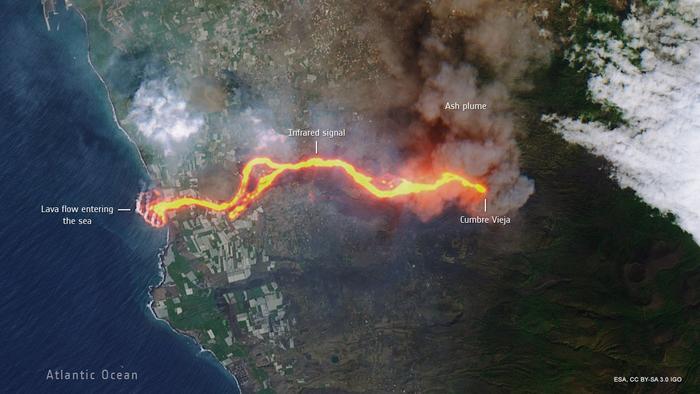 "Biggest Tragedy Ahead Of Us" - New Lava Blast Detected At Canary Islands...

"We are worried about the course this new flow of lava could..." 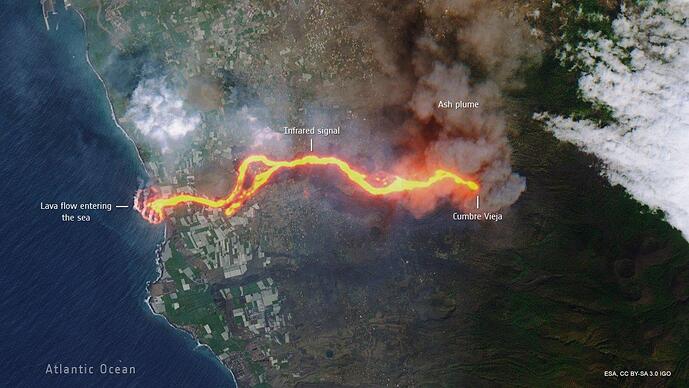 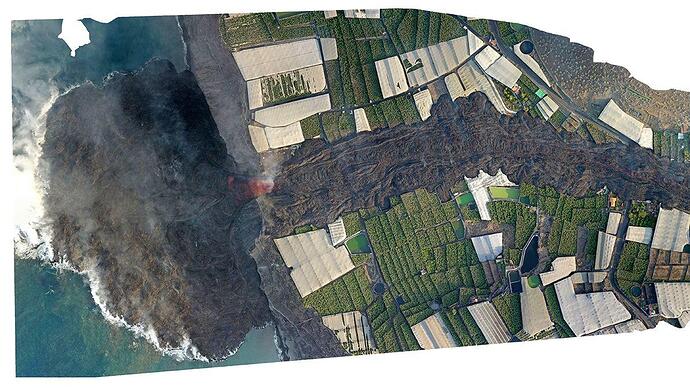 The volcano has really been going today: 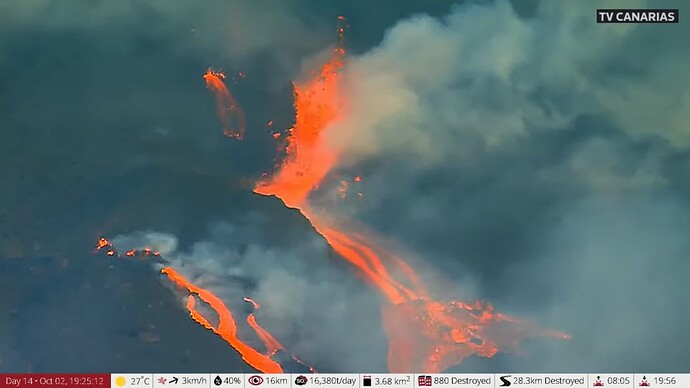 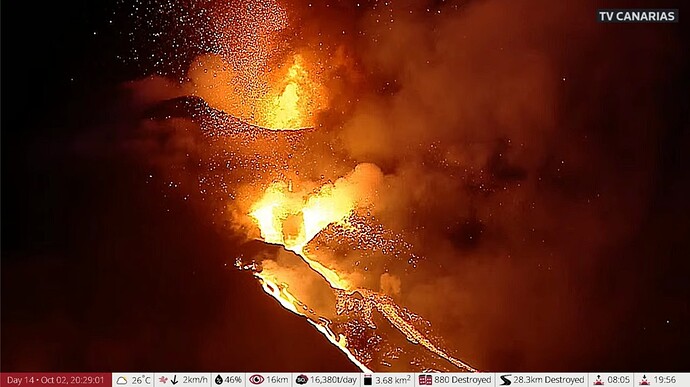 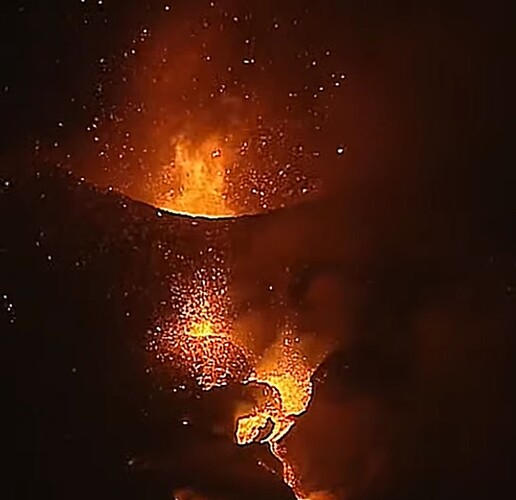 The new fissures are quite visible now.

Let’s see, we’ve got a sudden eruption that is more than unusual, and just by chance it happens to threaten the United States in an overwhelming way.

It might be HAARP, but some way or another, somebody is pumping some kind of radiation into that volcano, or heating it and melting rocks from deep below.

Now, who would that be?

Remember that earthquake outside of D.C. in Virginia? It shook the Washington Monument.

Virgínia has been a hotbed of seismic rest for thousands of years, and then an earthquake out of nowhere just when the USA was feuding with Russia.

But this volcano has “From China with love” written all over it.

@Soretna , @deandddd , there was a very intense geomagnetic storm in September end...sometimes that kind of an electromagnetic flux transfer (EFT) can transfer sudden bursts of energy into Earth's ionosphere...then from the Earth's ionosphere , such excess of energy could transform into a cyclonic storm , or be absorbed into Earth's interior and the crust , triggering volcanic or seismic events .

I have to say that I lean towards China as this is a perfect covert attack that can wipe out the Atlantic Ocean coastal cities very easily. Some well-placed cavern world detonations et voilà...

Yes, voilà, and the threat is there, looming.

Of course, if you give them enough time ...

This is why I say that we the armed forces have waited too long, and/or that they don't have hopes for the surface of the USA anyway; so they don't worry about it and are just preparing themselves to be able to launch something overwhelming. Those Peacekeeper Missiles from the 1970s are not overwhwelming

Well , then the Pacific "Ring of Fire" has several well known geological vulnerabilities (much easier to exploit) which are an order of magnitude scarier than anything the Atlantic has got...I really doubt though - any nation in their right mind would even dare instigating such a tit-for-tat conflict with that type of downward spiral for the whole of mankind...who would want to open a Pandora's box ?

I feel weaponising geological fault lines could be so catastrophic , it could jeopardise our planet itself - nobody could ever win such an unethical , self-destructive battle .

China has certain advantages in weaponising geological fault lines. The United States could detonate a nuclear devise off the coast of CHina, and ruin China economically because China needs ports and only has one coastline. But that would also have a devastating effect on the American allies Japan and Taiwan. So China could do it from the Canary Islands in the Atlantic, but the US couldn't do it so easily in the Pacific. At least, this is what I think offhand.

But perhaps China is anticipating such a maneuver, and that is why it manipulated its puppet Biden to hand over Afghanistan to the Taliban. Perhaps China is thinking of commercial trade with Europe.

It is not so easy for America to impose its will upon Europe anymore, and not so easy to transport across the Atlantic during a war, either.

Some of this is a bit farfetched, I admit.

I think what Dean is saying is that there is enough plausible deniability for China with cavern worlder alignments that they could get away with destroying the Atlantic costal cities without overt repercussions. The reason the east coast of the USA is a more significant target than the west coast is that nearly ALL of the population of the USA lives in the east. The west coast is a great landing place for China as it is already very low on the population scale just a tiny way in from the edge of the coast, but the east coast is clearly the primary target. Review these maps (and compare these with the conservative flood maps from the initial post above):

Consider the remarks here on this map: 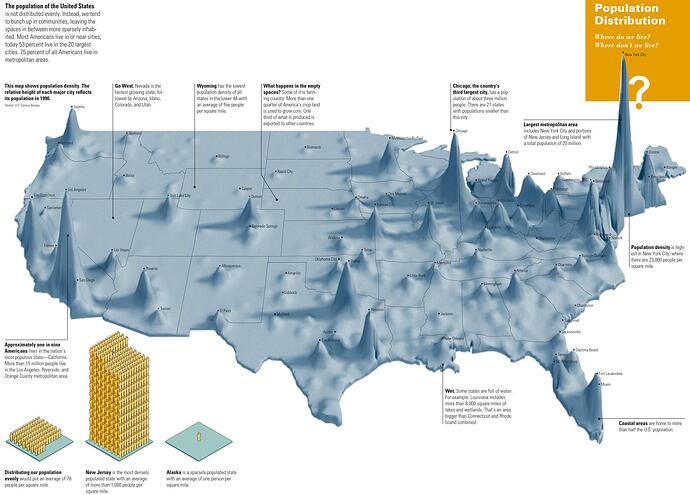 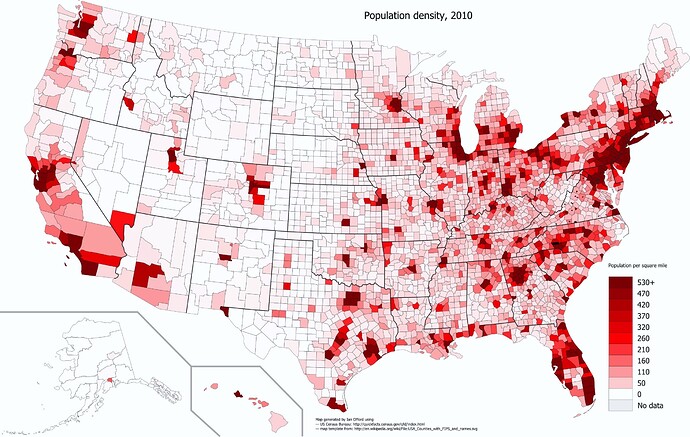 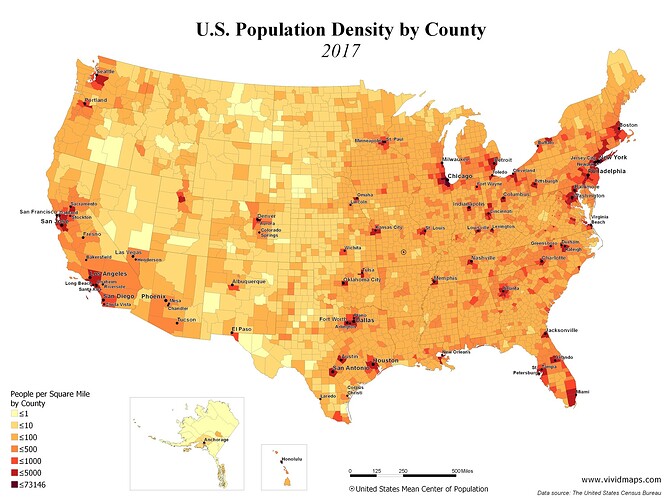 The volcano is obviously evolving - and it seems by visual estimation and behavior - worsening... You have to watch it for a bit to really appreciate the magnitude of this thing. This thing is belching hard and spewing some serious magma. Just look at the size of this compared to the trees. It is hard to appreciate the magnitude of this monster until you start to have contextual sizes to measure it visually: YouTube Live Feed 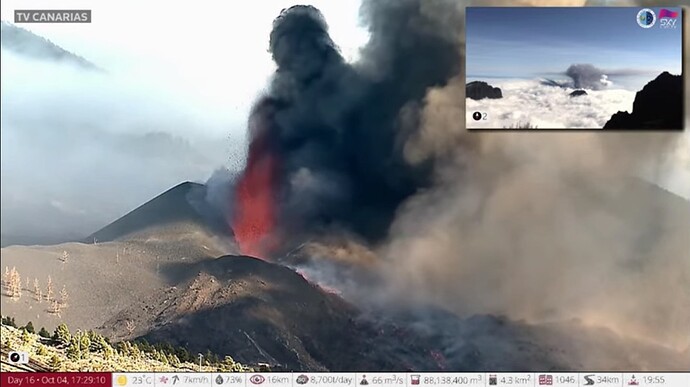 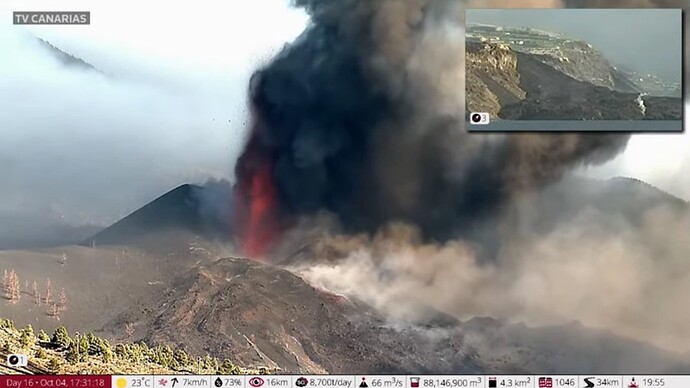 @Soretna , if China or any other nation were to use such depraved "below the belt" tactics , which even the much reviled Nazis or the Japanese empire did not resort to in WW II , it would certainly invite divine wrath (similar to that of the Avatars from ancient scripture) , at the very least , it would attract the ire of the unknown "entities" (possibly even the Hollow Earthers) that have kept the earth safe from such hazards...I have no hesitation in saying that ANY species that crosses this red line , deserves to be wiped off the face of this planet and become EXTINCT - for the well being of the Earth !

Below the belt? Uhm, I don't think anything is below the belt for communistic/luciferian aligned agents. They have a long history of mass depravity. The problem we have is that there is a much larger war going on behind the scenes and I suspect alignments and hidden efforts/waring is a much bigger dynamic than any of us realize.

Yes, I think that the name-of-the-game is what we don't know. Underground species have had UFO type craft for a long time. During the Korean War there was an encounter between a company with a howitzer that was shelling a town, and a saucer that came up very close to observe.

I don't think we had saucers back then, and if we do now, are they as good? We are Johnny-come-lately with UFO craft.

And then we hear of Tall White People who are here to supposedly help, and UFO mother ships in far-away orbit. And hollow earthers.

But I imagine that the underground species, e.g. those below Tibet, can do things against us from underground where they are hard to reach, for anyone! And this might just be what we are seeing.

Sidhartha, I hate to be fanatic, but the coincidence and timing of the La Palma volcano is just ashtonishing.

And any response from western civilization or The USA would have to be above the surface and, therefore, more vulnerable. As I mentioned, if we send a tsunami to China, we harm Japan and Taiwan.

I have just heard on the news that the lava is accoumulating 12 and 14 kilometers below the surface, and that the eruption is gaining force even today.

The explosions that I saw are gargantuan! I wonder how far down the actual explosion ocurrs. I saw all kinds of rubble at the base of a flat top mountain, and it was identified as the cone that had been blown off.

For how long can a mountain withstand all that without cracking in two ?

Imagine If the explosion itself, at some point, takes place 14 kilometers below. That would crack a third of the island off and have it plop into the ocean.

Because the Spanish television report that I heard stated that the Magma was "accumulating" at that depth below the surface, 14 kilometers. That means that it is getting supressed and bottlednecked at that depth. When something gets supressed and bottlenecked too much, it explodes. So the "big one" is going to cut a huge porttion of that island off from 14 kilometers below. That makes for a big plop ...

I think this must be what they are fearing, with the Tsunami and all that.

I personally prefer the live view from afarTV videos to keep tabs on La Palma. They have other volcanos and videos as well that are interesting.

@deandddd I have to say, I think your analysis about what's going on with the volcano is spot-on. This thing seems to be getting worse and worse. I can only surmise that this is not just a natural phenomenon... especially with such wide-reaching consequences...