I felt it could be interesting to document earthquake activity that we find interesting here for easy reference.

Over the last 24 hours there's been a bit of tectonic / earthquake activity that I find interesting.

One news outlet notes the quakes in California. I noticed some alerts from places outside of the US including Canada and South America. This lead me to take a glance at the USGS site for quake listings and in doing so I found the quake out in the Atlantic to be particularly interesting: 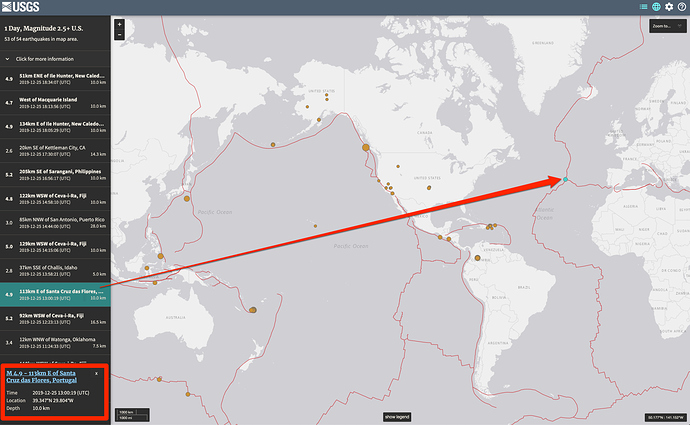 @Soretna , the ongoing Solar eclipse may have a direct correlation to this seismic activity . This correlation has been noticed for some of the quakes in earlier times as well .

This is correct @sidharthabahadur, there has been a lot of corollary data in this regard over time. This would make for an interesting comparison.

Yes @Soretna . My hunch is that the straight line alignment of the Sun and Moon's forces (both electromagnetic and gravitational) during a full Solar eclipse , creates an "extra" outwards pull on the Earth's crust....any vulnerable fault line could thus get aggravated in such a scenario , possibly triggering an earthquake .

Here's some more information , relevant to this topic :-

Can the position of the moon or the planets affect seismicity? Are there more earthquakes in the morning/in the evening/at a certain time of the month?

Earthquakes are equally as likely to occur in the morning or the evening. Many studies in the past have shown no significant correlations between the rate of earthquake occurrence and the semi-diurnal tides when using large earthquake catalogs.

Several recent studies, however, have found a correlation between earth tides (caused by the position of the moon relative to the earth) and some types of earthquakes. One study, for example, concludes that during times of higher earth and ocean tides, such as during times of full or new moon, earthquakes are more likely on shallow thrust faults near the edges of continents and in (underwater) subduction zones. Lunar or solar eclipses represent, of course, special cases of full and new moon, but do not cause any special or different tidal effects from full and new moon.

There have also been some small but significant correlations reported between the semi-diurnal tides and the rate of occurrence of aftershocks in some volcanic regions, such as Mammoth Lakes.

(From UC Berkeley with contributions from Gary Fuis)