Not really a fan of the UK's Daily Mail syndication, but the timing of this is particularly interesting:

Leaked photo from Pentagon UFO task force shows 'sliver cube' hovering over the Atlantic at 35,000ft - as classified reports reveal concerns 'aliens' could be operating beneath the world's seas 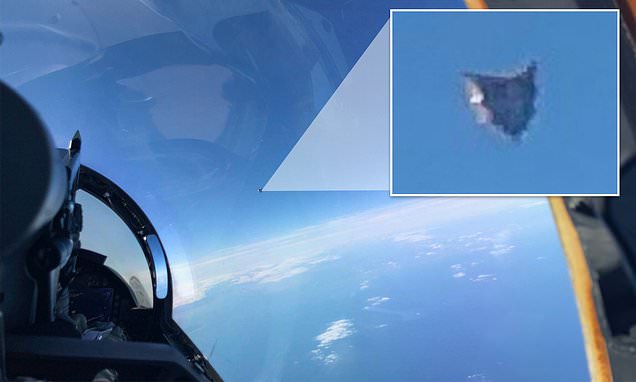 The two classified intelligence 'position reports', issued in 2018 and the summer of this year, circulated widely in the U.S. intelligence community, including the CIA, NSA, and Pentagon.

Obviously not new to any of us, BUT the timing of a possible false Messiah narrative via the anti-human / luciferian cavern dwellers sure makes sense given the current socioeconomic situation.

@Soretna , these craft may also be flown by the Hollow Earthers , who emerge in such craft through deep vents in the ocean floor...

Yes, as I noted I believe they're likely the cavern dwellers, but they could also be the concave folk. I suspect they are all probably all three or FOUR options:

You know, the citizens of the City of Varginha, where the Varginha crash took place, noticed that the two UFOs were dogfighting with each other. The one with humanoids crashed. We naturally assume that the other one had hollow earthers in it, since the hollow earth inhabitants seem to be Vedic and aligned with the celestials, although the humanoid occupants of UFOs (e.g., the Grays) are the ones that live below the crust.

But when we look, we don't know who is inside. We know very little. We are always left guessing.

@deandddd , @Soretna , there are numerous vents on the ocean floor that mankind cannot see and is not aware of...so just about any of these "entities" could be making use of them .

You will noticed "accessed through the sea".

"On page 175 of Alien Identities, Dr. Richard L Thompson ( http://www.afn.org/~bvi ) relates an underground abduction case where the underground base was accessed through the sea by UFO:
On the evening of January 3, 1979, Cardenas, his friend Fernando Marti, and Marti’s wife and 13 year old daughter were driving around on the outskirts of Hialeah, looking for a pig they could buy for a roast. They were unsuccessful, and on the way home their car engine quit.

The two men testified that the lights and starter wouldn’t work, and so they got out and began to look under the hood. At this point, they suddenly saw red and violet alternating lights reflecting off the engine and heard a sound like ‘many bees.’ ... Filiberto felt paralyzed, and he began to rise in the air shouting “ Don’t take me, don’t take me.” Later he recounted a strange and elaborate story that began when he awoke to find himself sitting, paralyzed, in the presence of a robot-like being and two men in tight-fitting suits. ... Filiberto said the alien beings looked quite human. They had elongated eyes with eyelashes, small flattened noses, long lipless mouths, and light beards. They also wore a symbol on the right of their chests, consisting of a serpent on a lazy X.

The story becomes even more extraordinary: The beings proceeded to take Filiberto to an underground base, traveling beneath the sea at high speed through a tunnel of “ firmed water “ that seemed to open in front of the craft so that water did not touch it. At the base, he met a human who was working with the aliens, and he was led through what seemed like a city.”

Dr. Thompson goes on to relate that Filiberto had several experiences while in this underground base accessed through the sea, some of them biological, some of them suggestive of mind control, then he was finally dropped of again on the surface."