Now here's an interesting underwater cave, seems to be in the category of "bottomless pit" or Abyss ! 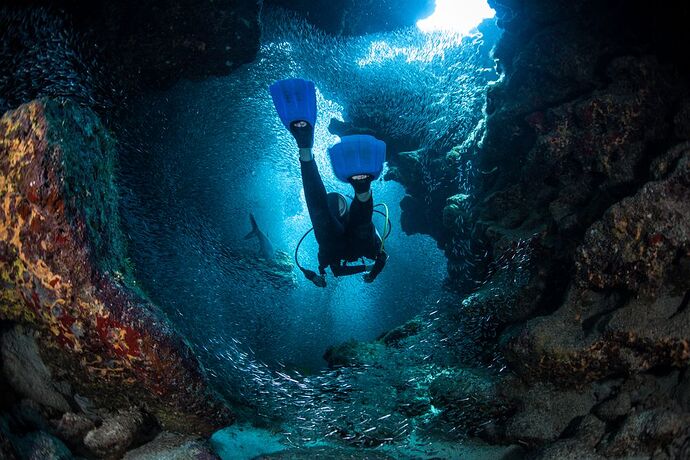 As of this week, the title of world's deepest underwater cave now belongs to the Hranice Abyss in the Czech Republic. An expedition team led by Polish explorer Krzysztof Starnawski used a custom-designed underwater vehicle to descend to a record-breaking 1,325 feet into the murky depths.

And then they ran out of line.

“It [the robot] was as deep as its rope could go, but the bottom was still nowhere in sight,” the Czech Speleological Society said in a statement.

Starnawski first started scuba diving the abyss in 1999, reaching in 2014 what he assumed was bottom at a depth of 656 feet. While exploring, he came across a gap that led to yet another deep shaft. A survey of this discovery with a weighted cable ran out of line at 1,260 feet. Returning in 2015, Starnawski found that the gap had widened and he was able to squeeze through, descending to a dizzying depth of 869 feet and still no bottom. It was then that he decided he needed a robot.

"This cave is very unique because it’s like a volcano, formed from hot mineral water bubbling from the bottom up, rather than rain coming from the top down like most caves," Starnawski told NatGeo last year. "There are probably only three caves like this in the world. There is nothing typical about this cave, and every dive we make new discoveries."

While the underwater vehicle did not hit bottom, it did record a number of fallen trees and branches wedged along the gently sloping side of the cave. The researchers say this suggests that the cave has changed shape over time, as the current vertical layout is not conducive to allowing large objects to reach the most extreme depths.

As for how deep the rest of the Hranice Abyss descends, Miroslav Lukas of the Czech Speleological Society said it's anyone's guess.

"I don't know if it's by five metres or a hundred, but the depth is set to change," he told the AFP.

To get a feel for the dizzying depths of the Hranice Abyss, check out the video below: