"Were We Invited" Video, It Is Really Good

Were We Invited, by Andrew and Julie Oien, is a video that is very agreeable and interesting to watch. The two pose questions, and offer information, about underground cavern worlds beneath a corridor stretching from Colorado to Texas, and encompassses Area 51, and which has a few gigantic parks right above it. (How convenient ... No digging allowed, no spelunking allowed, et cetera)

They seem to have a slightly different idea than I do about the origin and permenent occupation by the beings below. For example, it's obvious after five minutes that they have the idea that aliens came here, instead of having the idea that the underground creatures are permanent co-planetarians. The Vedic presentations lead to the idea that they are permanent co-planetarians. And the Bible doesn't offer the idea that such beings came at some point, simply that there are demoniac creatures whose world is below. But they are not pushy about their ideas and admit to other possibilities. In the larger scheme of things, these are details anyway.

They seem like decent people and their video is very well done. 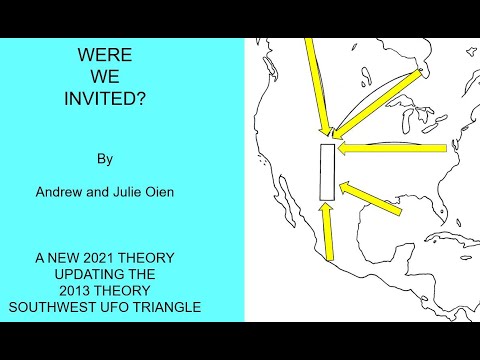 Years ago, I didn't truly understand the nature and extent of the undergroud network of cavern worlds below the western half of the USA. After reading the David Hatcher Childress book Lost Cities and Ancient Mysteries of the Southwest, though, I came to understand that it must be the equal of the network below The Andes.

This video, Were We Invited?, offers a lot of supporting evidence with nice documentation and graphics. And it connects the dots with the Roswell incident in a serious-minded and professional way.

The anthropologist L. Taylor Hansen suggested that the Mongolians who had had a fratricidal falling out with Genghiz Kahn had come to the North American West first by raft across northern China, and then by ship across the Pacific, and then over the Rockies to the eastern slopes, at least. This might have reached the Great Lakes region according to David Hatcher Childress. (But this is another can of worms) Supposedly, they numbered 20,000 horsemen.

However, I got divorced from this idea when I read the comments by the Lama Gelong to the Russian explorer Ossendowski about the subterranean world. They can be found in the book The Hollow Earth on Pages 229 - 230 : "All the subterranean passeges of the entire world lead to the world [underworld] of Agharta. The lamas say that all the subterranean cavities are inhabited by these people. The inhabitants of submerged prehistoric continents found refuge and continue to live in the subterranean world. ... In strange vehicles, unknown above [on the surface], they travel at unbelievable speed through tunnels inside the Earth".

20,000 horsemen (including horses) didn't cross norther China by raft and hitch a ride to North America (including horses) on Chinese boats, but they ended up there, and they came to be called Apaches. They still speak the language well enough to converse with modern Mongolians.

And the Pueblo Indians are Tibetans; all you have to do is look at their adobe houses, which are identical in construction as those in Tibet, and then you know where they came from. And there are swastica carvings in the stomping ground of the Adobe Indians.

By the way, the underground in those areas may have been blown to smithereens: Apache_Underground