Turbulent Blobs in Earth's Core May Explain Sudden Jerks in the Magnetic Field !

Folks , please ignore the explanation given by mainstream science about these "blobs" & focus just on the shape of the magnetic field and the fact that such jerks occur ! Think about it - doesn't our Hollow Earth theory , with an inner Sun , give a much better explanation for such phenomena ??

Every 10 years or so, another piece of Earth's magnetic field undergoes an unpredictable transformation called a 'geomagnetic jerk.' A new study suggests that Earth's wonky core might be to blame. 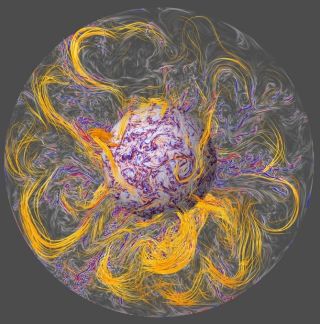 Earth's magnetic shield defends our planet from the scourges of solar wind and cosmic radiation, making life on our planet possible. But every 10 years or so, it can be a real jerk.

"Geomagnetic jerks" are abrupt changes in the strength of Earth's magnetic field. While some variations in this field are expected to occur gradually, over hundreds to thousands of years, these sudden wobbles in intensity last only a few years at most, and may only alter the Earth's magnetism over specific parts of the world at a time. One of the first jerks documented, for example, briefly warped the field over Western Europe in 1969.

Since then, a new jerk has been detected somewhere in the world every 10 years or so, and scientists still don’t know what's causing them. While many geomagnetic phenomena, including the northern and southern lights, result from electrified solar wind bashing into Earth's magnetosphere, the jerks are thought to originate from deep inside our planet's core, where the magnetic field itself is generated by the constant churn of liquid-hot iron. The exact mechanism of action, however, remains a mystery. [The 8 Biggest Mysteries About Planet Earth]

Now, a new study published today (April 22) in the journal Nature Geoscience(opens in new tab) offers a potential explanation. According to a new computer model of the core's physical behavior, geomagnetic jerks may be generated by buoyant blobs of molten matter released from deep inside the core.

In the new study, the researchers built a computer model that painstakingly recreates the physical conditions of Earth's outer core, and shows its evolution over several decades. After the equivalent of 4 million hours of calculations (sped up thanks to a French supercomputer), the core simulation was able to generate geomagnetic jerks that closely aligned with actual jerks observed over the last few decades.

These simulated jerks jiggled the magnetosphere every 6 to 12 years in the model — however, the events seemed to originate from buoyant anomalies that formed in the planet's core 25 years earlier. As those blobs of molten matter approached the outer surface of the core, they generated powerful waves that rushed along magnetic field lines near the core and created "sharp changes" in the flow of liquid that governs the planet's magnetosphere, the authors wrote. Eventually, these sudden changes translate into jerky disturbances in the magnetic field high above the planet.

"[Jerks] represent a major obstacle to the prediction of geomagnetic field behavior for years to decades ahead," the authors wrote in their new study. "The ability to numerically reproduce jerks offers a new way to probe the physical properties of Earth’s deep interior."

While it's impossible to confirm this simulation's results with actual observations of the core (it's too hot and high-pressured to get anywhere near our planet's center), having a model that can recreate historical jerks with high accuracy could be helpful in predicting the many jerks yet to come, the researchers wrote.

Knowing when the jerks are coming could also help monitor how they affect other geodynamic processes. For example, is it possible, as one 2013 study in Nature(opens in new tab) suggested, that the jerks are harbingers of longer days. According to that study, sudden changes in the fluid flow at Earth's core may also alter the planet's spin by the slightest bit, actually adding an extra millisecond to the day every 6 years or so. Periods where Earth's day lengthened seemed to correlate with several established instances of well-known jerks, the researchers reported.

If that's true, and geomagnetic jerks are responsible for a slightly longer workday every few years, at least we know we've given them the right name.

List members , now please just take a close look at this profile image of the Sun , showing it's electromagnetic field :- 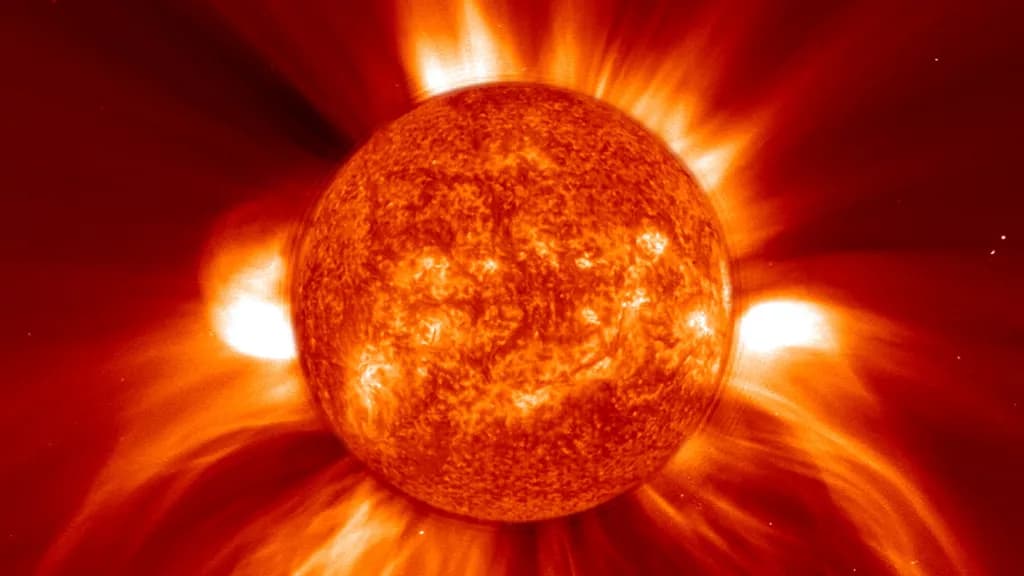 Doesn't the above image look similar to the image of the Earth's own magnetic field lines emanating from the core...? I am suggesting the Earth's core is also like a Sun , though much smaller and less energetic - an inner Sun which all Hollow planets have !