They Are Among us

On pages 76 and 77 of Etidorhpa there are some comments which reveal some
kind of network or secret society which infiltrates our society on the
surface, specifically, academic institutions. Maybe this is part of the
reason why not one department head of any astronomy department in any
university has spoken out against Apolloscam, and physics professors let it
be taught that gravity simply relates to the density of mass. [Not to the electrostatic charge that the matter carries]

"It has been ordained that a select few must from time to time pass over
the threshold that divides a mortal's present life from the future, and your
lot has been cast among the favored ones. It is or should be deemed a
privilege to be permitted to pass farther than human philosophy has yet
gone, into an investigation of the problems of life; this I say to encourage
you. We have in our order a handful of persons who have received the
calculated fruits of the close attention others have given to these subjects
which have been handed to them by the generations of men who have preceded.
You are destined to become as they are. This study of semi-occult forces has
enabled those selected for the work to master some of the concealed truths
of being, and by the partial development of a new sense or new senses,
partly to triumph over death. These facts are hidden from ordinary man, and
from the earth-bound workers of our brother-hood, who can not even interpret
the words they learn. The methods by which they are elucidated have been
locked from man because the world is not prepared to receive them,
selfishness being the ruling passion of debased mankind, and publicity,
until the chain of evidence is more complete, would embarrass their further
evolutions, for man as yet lives on the selfish plane."

"Do you mean that, among men, there are a few persons possessed of powers
such as you have mentioned?"

"Yes; they move here and there through all orders of society, and their
attainments are unknown, except to one another, or, at most, to but few
persons. These adepts are scientific men, and may not even be recognized as
members of our organization; indeed it is often necessary, for obvious
reasons, that they should not be known as such."

And people, know that they are mind readers. This came out in Etidorhpa, too.

They got us comin' and goin'. Welcome to the "Brave New World".

In the book, The Hollow Earth, by Raymond Bernard, similar information is given, identifying the underground below Tibet as the central point of an underground civilization whose tunnel systems stretch out to all parts of the world. Abd,whose spies are everywhere.

Think about those scientific myths that are maintained and taught at universities. It is the same thing all over the world, even in countries that are antagonistic towards each other.

What exists is an adept brotherhood that has loyalties beyond national loyalties. They form a secret society without having an actual society to point to. It is so secret that it is actually subtle.

They be comin'. All the pushin' makes it clear that this disclosure hogwash is one of the next big poo on fan moments for the world. 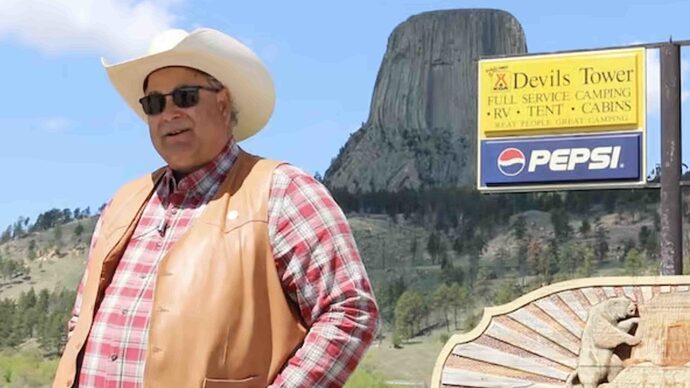 When Steven Spielberg chose Devils Tower to be the location to film "Close Encounters of the Third Kind," the National Park Service said no. So, they went next door to Ogden Driskill's ranch and shot it there. He was just 16 and remembers it well...