The Great Ancient Egyptian Batteries - "TESLA KNEW The Secret of the Great Pyramid: Unlimited Energy to Power the World" 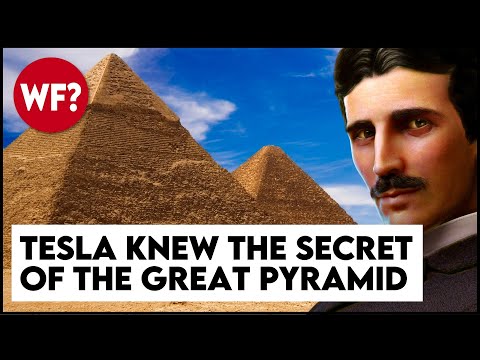 True @Soretna , Tesla had great respect for the wisdom of the ancients - something most of his contemporaries (like Thomas Edison) lacked .

Folks , I now believe the main 3 Pyramids and the Sphinx at Giza , actually PREDATE (by thousands of years) what we think of as the Egyptian civilisation . Of course , there is some continuity in the sense that the Egyptians built their own civilisation around these prehistoric monuments that were built by "someone else" , whom the Egyptians considered to be Gods . This is the only way , the multiple anomalies surrounding these 3 main Giza Pyramids and the Giza Sphinx can be explained !

@sidharthabahadur I agree. The historian Eustace Mullins believed that the pyramids were built by Shem, the son of Noah, and there are archaeological evidences to indicate this was the case. It seems the original Adamites which were preserved by Noah's lineage were extremely advanced and had tremendous technological capabilities:

In the Greek language, Shem appears as Ehu; in Egyptian mythology, he is Shu, the son of Ra, the Sun God. It was through claimed descent from Shem that Louis, King of France, called himself the "Sun King." However, a much more important point, and one that has again been obscured or hidden by the priests who controlled the educational system throughout the last three thousand years, is the fact that it was Shem who founded and built the great civilization of Egypt.

The rulers of Egypt were called Pharaohs, from the Hebrew word pira, meaning "long hair." The native Egyptians were short-haired. Not only was Shem long-haired, he was also fair-haired. In their records, the priests call Shem "Shufu," or "Khufu," which means long hair. Being a great warrior, Shem easily led his people in the conquest of the native Egyptians. He immediately set about to commemorate his reign by building the Great Pyramid at Gizeh. Babylon was then overcome by the son of Shem, Elam; a later descendant, Cyrus of Persia, an Elamite, completed the final conquest of Babylon and built the great Persian Empire. It was to signify his great military successes that Shem adopted as his symbol the lion, which is still the symbol of rulers today. The Great Pyramid was later called Khiut, the Horizon, in which Khufu had been swallowed up, as the western horizon swallowed up the sun each evening.

After extensive archaeological investigations, the Royal Astronomer of Scotland concluded that the evidence was irrefutable that the Great Pyramid at Gizeh had been built by Shem. He found the name Shufu inside the pyramid, painted in red, which signified Shem's fair hair. Also inside the pyramid is an inscription placed there after the death of his descendant, Amenhotep IV, "He stopped the barbaric practices of the priests which had been introduced by Naamah and her followers from Babylon, including Nimrod." The priests murdered Amenhotep IV, so that they could resume their orgies of lust and child sacrifices. They had admitted to Herodotus that the Great Pyramid had been built by "a wandering shepherd," an odd observation, as shepherds do not usually create such grandiose monuments to themselves. However, this was one of the terms of derision by which they always referred to Shem after his death. Other inscriptions by the priests throughout centuries of Egyptian history revile Shem as "pig," "dwarf," and other terms signifying their hatred of him, possibly because he slew their mentor, Nimrod. In the same areas, other inscriptions extol the degenerate Ham, who had been corrupted by his consort, the evil Naamah, and introduced to the practices of human sacrifice and cannibalism.

Egyptian civilization reached its peak during the reign of Shem. The Sphinx is now admitted to be a portrait of him. After his death, the priests not only resumed their evil practices, but they embarked on a successful campaign to black out his name from recorded history, a campaign which has largely succeeded during the ensuing three thousand years. They also launched terrible punitive actions against Shem's fair-haired descendants, often murdering them, or burning them alive. Not only did the priests falsify the records of Shem, but they also succeeded in eliminating most of the subsequent history of his fair-skinned descendants, the Shemites, or, as they are sometimes called, the Semites.

Very interesting possibility @Ephraimite - Nimrod is a mysterious character from ancient history and the reference to him in the article you shared is quite intriguing...hmm !

Eustace Mullins really buttons up a lot of mysteries in his observations and sets exceedingly much into proper context. His access to the enormous volumes of essentially hidden knowledge in the Library of Congress really was a unique and inaccessible resource, so I have to really rank his credibility at a high level.