Tarim Mummies from China May be Ancestors of Native Americans !

List members , this is an astonishing conclusion - the Caucasoid looking Tarim mummies are now CONFIRMED to be of a people that belonged to that region itself - in fact Native Americans may have been their descendents...hmm !

***Please pay special attention to this paragraph about Ancient North Eurasians (ANE) - could they be Hyperboreans or Vedic people who emerged from the North Polar Opening ?? The Rig Veda does refer to a "Tushara" community in Central Asia...sounds quite similar to Tocharian . Could this explain the mysterious genetic affinity South Asians have to the distant Siberians ?!

Ancient North Eurasians disappeared as a separate people 10,000 years ago

The researchers now state that the Tarim people descended from Ancient North Eurasians (ANE), people from the Pleistocene era who had disappeared for the most part approximately 10,000 years ago, just after the end of the last Ice Age, when glaciers were melting all over the Northern Hemisphere.

Genes from these ANE individuals now exist only in the genomes of some present-day peoples — namely, among indigenous people in Siberia and the Americas, according to the researchers. 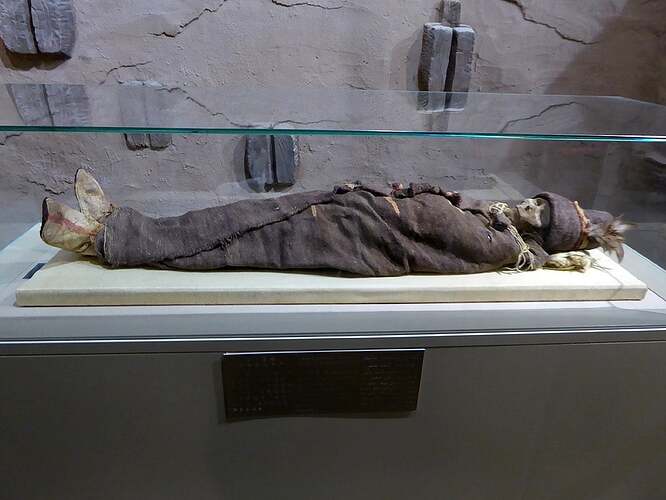 Tarim Mummies from China May be Ancestors of Native Americans

DNA studies on Tarim mummies in China revealed recently that they may in fact be the ancestors of Native Americans.

Folks , here are some more insights into the enduring mystery of these enigmatic people . I now have a very strong hunch & conviction that the Tarim mummies can reveal absolutely ASTONISHING , paradigm busting secrets from the ancient world :-

Some Tarim mummies on trade caravans spoke Mleccha (Meluhha) before they were...

This hypothesis needs to be tested by archaeometallurgical and historical linguistic studies from an extended area from Ancient Far East to Ancient Near East. This is also an imperative in the context of a new start for Vedic and IE studies. Evidence

Template:History of Xinjiang The Tocharians or Tokharians (/toʊ'kɛriən/ or /toʊ'kɑriən/) were Indo-European peoples who inhabited the medieval oasis city-states on the northern edge of the Tarim Basin (modern Xinjiang, China) in ancient times.

Bronze Age cultures in the Tarim Basin and the elusive Proto-Tocharians |...

Folks , the bottomline is this - there is no limit to idle conjecture...we can speculate , speculate and speculate till the cows come home , but here is a genetic study that nailed it - genes do NOT lie (people do) :)) No wonder , genetics is being called THE most promising among the sciences for this 21st century !

***The other mouth watering irony , that emerges from this study , a KNOCK-OUT TWIST in the tale if you may - these tall Tarim people (Tocharians) , who had strikingly Caucasoid features and belonged to the R1a1 Haplogroup , were infact the ancestors of Native Americans . Mainstream Academia (Anthropologists) have "by default" always assumed Native Americans to be of Mongloid origin...there was some mixing/intermingling of course , but the fact remains that Native Americans have inherited at least a part of their genes from the ancient Aryans...we can now say this is TRUE based on HARD evidence !