This is a very interesting 3 minute video about the Ozone hole over Antarctica. 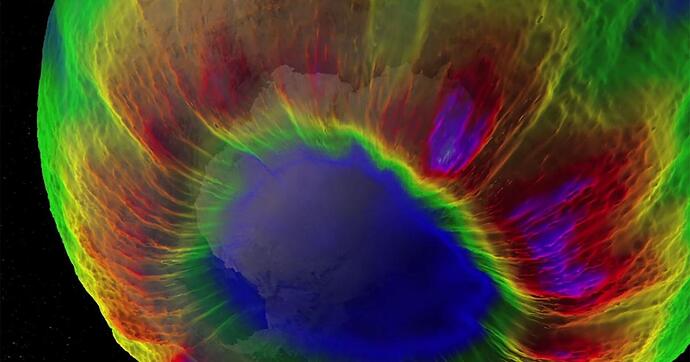 Ozone Hole: How We Saved the Planet | Discovering the Ozone Hole

Jonathan Shanklin discovers the ozone hole over the Antarctic.

I’ve read somewhere that the reason the last mile thick ice firmament was destroyed was because nations warred with one another.
One nation would attack another nation by creating hole(s) over the enemy territory. The high frequency light raining down upon them basically makes that patch of land uninhabitable.

Eventually, there were too many holes in the firmament, it all came crashing down in the form of a 40 day deluge.

This forum is well aware of the stories of the German Nationalists (pronounced Nazi-oh-nahl-ist, nazi in short) having built a whole civilization just inside the south polar opening.

Well, what would the victors of WWII do to combat them? People haven’t changed much in the last 10,000 years, I believe

Create a large hole in the O3 layer over their territory! Brilliant and sick at the same time…

@gardengnome , quite possible - this is too much of a coincidence .

By the way, Europa, one of Jupiter’s moons, still has firmament made of water ice. Scientists now admit that there are oceans and volcanoes underneath it.