Folks , there is a CRISIS brewing in Climatology - no , no , don't worry , this has nothing to do with the Earth . Rather this UNmanmade Global Warming (aha !) has "affected" Jupiter !!

**You see , our scientists are ABSOLUTELY CLUELESS as to why Jupiter's Polar region is emitting SO much heat !! Of course , we Hollow Planet researchers could tell them a thing or two about the TRUE root cause...but IF only they asked for our help and guidance :)) HILARIOUS !

Sitting more than five times the distance from the Sun as Earth, Jupiter is not expected to be particularly warm. Based on the amount of sunlight received, the average temperature in the planet’s upper atmosphere should be about minus 100 degrees Fahrenheit or a chilly minus 73 Celsius. Instead, the measured value soars to around 800 degrees Fahrenheit or 426 Celsius. The source of this extra heat has remained elusive for 50 years, causing scientists to refer to the discrepancy as an “energy crisis” for the planet.

Recently an international team assembled observations from a trio of observatories -- NASA’s Juno spacecraft, the Hisaki satellite from the Japan Aerospace Exploration Agency (JAXA) and Keck Observatory on Maunakea in Hawaiʻi. -- to discover the likely source of Jupiter’s thermal boost.

“We found that Jupiter’s intense aurora, the most powerful in the solar system, is responsible for heating the entire planet’s upper atmosphere to surprisingly high temperatures,” said James O’Donoghue of the JAXA Institute of Space and Astronautical Science, Sagamihara, Japan. O’Donoghue began the research while at NASA’s Goddard Space Flight Center in Greenbelt, Maryland and is lead author of a paper about this research appearing in Nature August 4.

Jupiter is first shown in visible light for context before an artistic impression of the Jovian upper atmosphere's infrared glow is overlain. The brightness of this upper atmosphere layer corresponds to temperatures, from hot to cold, in this order: white, yellow, bright red and lastly, dark red. The aurorae are the hottest regions and the animation shows how heat may be carried by winds away from the aurora and cause planet-wide heating. At the end, real data is added with a temperature scale, indicating the observed global temperatures measured in the study.

Auroras occur when electrically charged particles are caught in a planet’s magnetic field. These spiral along invisible lines of force in the magnetic field towards the planet’s magnetic poles, striking atoms and molecules in the atmosphere to release light and energy. On Earth, this leads to the colorful light show that forms the aurora Borealis and Australis, also known as the northern and southern lights. At Jupiter, material erupting from its volcanic moon, Io, leads to the most powerful aurora in the Solar System and enormous heating in upper atmosphere over the polar regions of the planet.

Jupiter is shown in visible light for context underneath an artistic impression of the Jovian upper atmosphere's infrared glow. The brightness of this upper atmosphere layer corresponds to temperatures, from hot to cold, in this order: white, yellow, bright red and lastly, dark red. The aurorae are the hottest regions and the image shows how heat may be carried by winds away from the aurora and cause planet-wide heating.

The idea that the aurora could be the source of Jupiter’s mysterious energy had been proposed previously but observations have been unable to confirm or deny this until now.

Global models of Jupiter’s upper atmosphere suggested that winds heated by the aurora and headed to the equator would be overwhelmed and redirected by westward winds driven by the planet’s rapid rotation. This would prevent the auroral energy from escaping the polar regions and heating the whole atmosphere. However, this new observational result suggests that such trapping is not occurring, and that the westward winds may be relatively weaker than expected compared with equatorward winds.

High-resolution temperature maps from Keck II, combined with magnetic field data from Hisaki and Juno, allowed the team to catch the aurora in the act of sending what appears to be a pulse of heat toward Jupiter’s equator.

The team observed Jupiter with the Keck II telescope for five hours on two separate nights in April 2016 and January 2017. Using the Near-Infrared Spectrometer (NIRSPEC) on Keck II, heat from electrically charged hydrogen molecules (H3+ ions) in Jupiter’s atmosphere was traced from the planet’s poles down to the equator.

Previous maps of the upper atmospheric temperature were formed using images consisting of only several pixels. That’s not enough resolution to see how the temperature might be changing across the planet, providing few clues as to the origin of the extra heat. To improve the situation, the team utilized the power of Keck II to take many more temperature measurements across the face of the planet and only included measurements with uncertainty in the recorded value of less than five percent. This took years of careful work and yielded temperature maps with over ten thousand individual data points, the highest resolution to date.

Instead of high temperatures only in the polar regions near the aurora, which would be expected if the heat was trapped there, these detailed maps showed that the heat in the upper atmosphere was more widely distributed, with a gradual decrease in temperature closer to the equator.

“We also revealed a strange localized region of heating well away from the aurora - a long bar of heating unlike anything we've seen before,” said Tom Stallard, a co-author of the paper at the University of Leicester, Leicester, United Kingdom. “Though we can't be sure what this feature is, I am convinced it’s a rolling wave of heat flowing equatorward from the aurora.”

Additionally, observations from JAXA’s Hisaki satellite showed that conditions at the time of the Keck II temperature observations could generate a strong aurora on Jupiter. From orbit around Earth, Hisaki has observed the aurora-generating magnetic field around Jupiter since the mission’s launch in 2013. This long-term monitoring has revealed that Jupiter’s magnetic field is strongly influenced by the solar wind; a stream of high-energy particles that emanates from the Sun. The solar wind carries its own magnetic field and when this meets Jupiter’s planetary field, the latter is compressed. At the time of the Keck II observations, Hisaki showed that pressure from the solar wind was particularly high at Jupiter and the field compression is likely to have created an enhanced aurora. 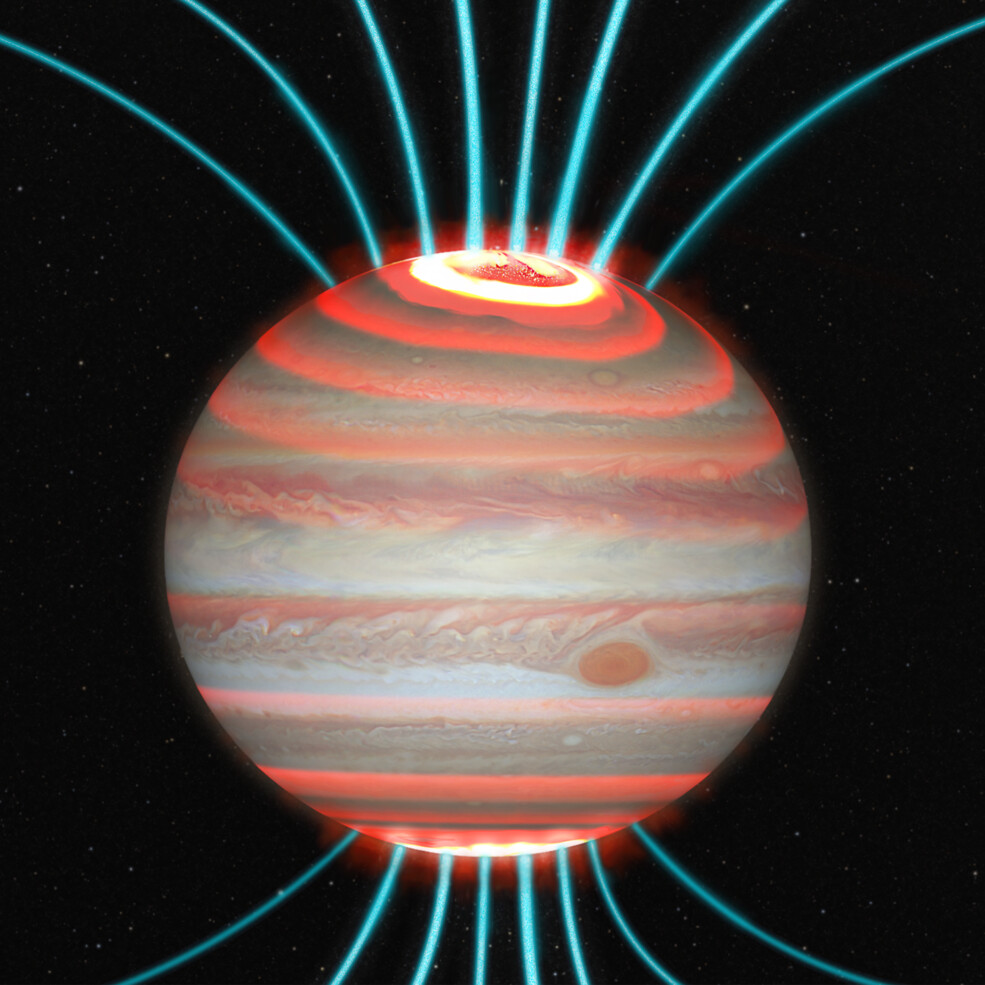 Jupiter is shown in visible light for context with an artistic impression of the Jovian upper atmosphere's infrared glow overlain, along with magnetic field lines (blue lines). The aurorae are the hottest regions and the image shows how heat may be carried by winds away from the aurora and cause planet-wide heating.

Finally, observations from Juno in orbit around Jupiter provided the precise location of the aurora on the planet. “Juno’s magnetic field data provided us with a ‘ground truth’ as to where the aurora was: this information isn't readily available from heat maps, as heat leaks away in many directions,” said O’Donoghue. “Picture this like a beach: if the hot atmosphere is water, the magnetic field mapped by Juno is shoreline, and the aurora is ocean, we found that water left the ocean and flooded the land, and Juno revealed where that shoreline was to help us understand the degree of flooding.”

"It was pure luck that we captured this potential heat-shedding event,” adds O’Donoghue. “If we’d observed Jupiter on a different night, when the solar wind pressure had not recently been high, we would have missed it!”

More about the observatories and partners:

The research was funded by NASA through the Solar System Observations Program and the Solar System Workings Program as well as JAXA’s International Top Young Fellowship program. Juno is part of NASA's New Frontiers Program, which is managed at NASA's Marshall Space Flight Center in Huntsville, Alabama, for the agency's Science Mission Directorate in Washington. NASA’s Jet Propulsion Laboratory, a division of Caltech in Pasadena, California, manages the Juno mission for the principal investigator, Scott Bolton, of the Southwest Research Institute, San Antonio, Texas. NASA Goddard built and runs Juno’s magnetometer instrument. The W. M. Keck Observatory is operated as a scientific partnership among the California Institute of Technology, the University of California and NASA. The Observatory was made possible by the financial support of the W. M. Keck Foundation. The authors wish to recognize and acknowledge the significant cultural role and reverence that the summit of Maunakea has always had within the indigenous Hawaiian community; the authors are fortunate to have the opportunity to conduct observations from this mountain.