A team of British explorers has claimed to have spotted a legendary ape man believed to inhabit an island jungle in Sumatra. Witnesses have described the beast as being about 5ft tall and say that it walks on two legs.

A team of British explorers has claimed to have spotted a legendary ape man believed to inhabit an island jungle in Sumatra. Witnesses have described the beast as being about 5ft tall and say that it walks on two legs.

A team of British explorers has claimed to have spotted a legendary ape man believed to inhabit an island jungle in Sumatra.

According to a report in The Sun , the ape man was seen by the four-strong team and their Indonesian guide.

Witnesses have described the beast as being about 5ft tall and say that it walks on two legs.

It is thought to be extremely powerful — with reports of onlookers seeing it ripping apart logs.

After a spate of sightings around Lake Gunung Tuju, in the Kerinci national park, a team from the Devon based Centre for Fortean Zoology — which investigates unknown species of animals — embarked on a two-week mission to the region to see if they could obtain evidence of the creature.

The explorers were tracking through dense jungle in Sumatra when two of them caught a glimpse of the famous ‘Orang Pendek’ — or short man.

The group brought back a hair sample and a piece of chewed palm from the island’s Kerinci National Park they hope will provide DNA evidence of the beast.

They also snapped a strange footprint thought to belong to the creature.

Sightings of the hairy human-like monster have been made in the area since colonial times — and it is alleged to be immensely powerful.

The explorers hope the sample of rattan palm, which is thought to have been munched on by the Orang Pendek, will contain some of its cells.

The palm and hair sample have been sent for testing.

The elusive Orang Pendek shares its habitat with the Sumatran Tiger, pythons, and Saltwater crocodiles.

According to Richard Freeman, the expedition zoologist and zoological director at the Centre for Fortean Zoology, the creature is an unidentified species of ape.

“It’s supposed to be a powerfully built upright walking ape. It walks on two legs rather than four - like a man, about five foot tall with dark fur - immensely strong,” he added.

The team, who have just returned from their two-week expedition, hailed it a success and are awaiting the results of the DNA tests.

List members , this region in Sumatra also has some impressive cave complexes where this strange ape man creature may be hiding . 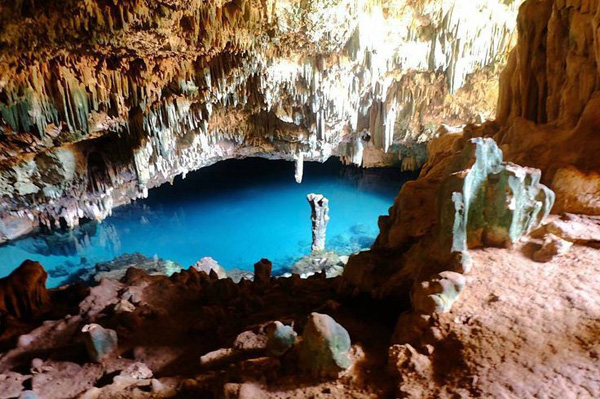 East Nusa Tenggara is a worthy vacation destination. It has many vacation destinations like Komodo Island, Rinca Island, and much more. Near to Labuan Bajo, you can find Rangko Village. It is also a worthy place to visit. The most famous spot is Goa Rangko. This wonderful cave is located in the Gusung Island. The best time to visit is during the low tide. Visitors can reach the cave from the village by a boat. So, what is inside? Why is it so special?

The Nuance
In terms of appearance, it features a small mouth of the cave. No worries. Everyone can enter it without hassles. Once you enter the cave, you can find many stalactites. Below, there is a natural pond. The water is clear and cool. It is quite tempting indeed. Almost all visitors are likely to play in the water. It is a rare opportunity so you need to try it as well. The best time to visit the cave is in the daylight. It is a no brainer. It is because the cave will get darker in the evening.

Visiting Goa Rangko
The locals call it Goa Rangko. Goa means “cave”, after all. Tourists have different reasons for visiting the cave. Apart from the beauty, it is also about the adventure. In order to reach the cave, you need to pass through a bridge. Below this wooden bridge, there is sea water. Not to mention there are colorful corals. Once you reach the shorelines, you may find a cottage. It was built for visitors. That means you can rest here before heading to the cave.

According to local people, the best time to visit the cave is at noon. The sun ray will be natural illumination. Actually, visitors are allowed to swim in it. The thing is you aren’t allowed to litter. Make sure you take care of the environment well. That means you aren’t allowed to pee in the pool either. Once you explore the cave, it is time to conduct another adventure. Don’t spend too much time inside. The cave gets darker over time.

Nearby Attraction
Another attraction is Gusung Island. It is actually a sand dune. There are no plants or trees at all. This unique island only occurs during the low tide. The best time to visit it is in the morning. Usually, visitors want to take pictures of Gusung Island. Snorkeling is also a good idea. However, you should do this before visiting Goa Rangko. Next, you can explore Rangko Village. The locals are approachable. You can even learn some cultures from them.

How to Get There
From Labuan Bajo, it takes about 45 minutes. You can use either a car or motorcycle. In order to avoid the bumpy road, you shouldn’t come during the rainy season. Once you reach Rangko Village, you can use a boat to the beach. As an alternative, you can use a bridge by foot. Though, it takes much time and energy. Make sure you have arrived at noon. When it comes to accommodations, you can find many options of hotels in Labuan Bajo. As an alternative, you can talk to villagers. Some of them allow you to use their vacant room.