Folks , here is an excellent research article that let the cat out of the bag - Jupiter's Poles are much hotter than it's equator ! Now isn't that the the very cornerstone of our Hollow Planet theory - in which the heat of the inner Sun , emanates from the Polar openings of hollow planets ?? 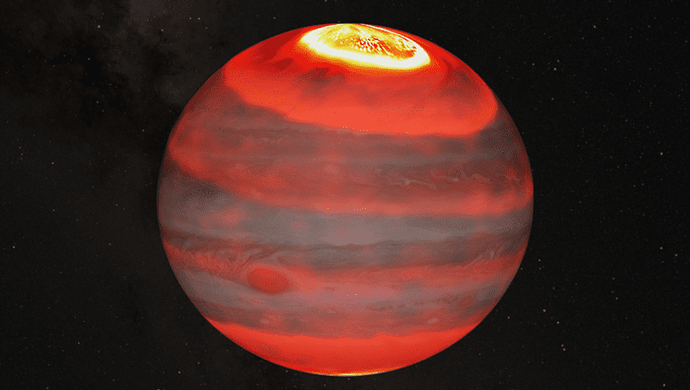 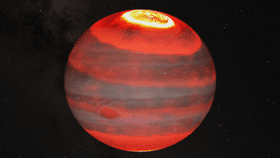 Jupiter's upper atmosphere is far hotter than theory suggests, and the reason turns out to be the release of energy from the auroras, which then spreads down to the equator. Image Credit: J. O'Donoghue (JAXA)/Hubble/NASA/ESA/A. Simon/J. Schmidt

For 50 years astronomers have puzzled over Jupiter's “energy crisis”, the discrepancy between the measured temperature of its upper atmosphere and the fact it appears to be much hotter than what theory predicted. Now, a new paper in Nature has an explanation, and it comes from the dazzling auroras around the giant planet's poles.

Around the time people started worrying about an Earthly energy crisis, when stocks of oil and gas might run out before we find replacements, planetary astronomers noticed a Jupiter-sized anomaly. Based on the amount of sunlight each planet gets, anticipated temperatures can be predicted. The fact the Greenhouse Effect keeps the Earth warmer than this had been known since the mid-19th century, and space probes revealed an even larger version of this effect on Venus, but Jupiter proved harder to explain.

Jupiter's distance from the Sun is consistent with a temperature of -70 to -100ºC, but its upper atmosphere averages more than 400ºC. That's a huge discrepancy. Warming gasses like carbon dioxide couldn't explain this, and the failure to find something else that did was named Jupiter's energy crisis

Material expelled by volcanoes on Jupiter's moons Io and Amalthea, combined with Jupiter's powerful magnetic field, create auroras that dwarf the Earth's northern and southern lights. Astronomers realized the release of such immense amounts of energy would heat the polar atmosphere enough to explain the discrepancy there. Just as on Earth, however, the auroras don't reach lower latitudes, which left most of the planet's temperatures unexplained, particularly since strong winds were thought to trap heat near the poles. However, it turns out thermal energy from the auroras reaches places the lights never do.

For his PhD at the University of Leicester Dr James O'Donoghue conducted work central to the paper. “We first began trying to create a global heat map of Jupiter's Upper Atmosphere,” he said in a statement. “The signal was not bright enough to reveal anything outside of Jupiter's polar regions at the time, but with the lessons learned from that work we managed to secure time on one of the largest, most competitive telescopes on Earth some years later.”

The Keck telescope turned out to be powerful enough to make temperature maps with pixels representing two degrees of latitude and longitude. These, O'Donoghue said, revealed that “Jupiter's aurora, despite taking up less than 10% of the area of the planet, appears to be heating the whole thing,”

Rather than a sharp discontinuity, Jupiter has a steady temperature gradient from around 1,000 kelvin at the poles to 600 kelvin at the equator. Even more convincingly, a January 2017 peak in auroral activity, caused by compression in the solar wind, produced an upsurge in temperatures spreading over much of the planet. Temperatures surged as much as 175 kelvin during this event.

The other gas giants have their own energy crises, and while they are much harder to study from Earth, similar mechanisms are probably responsible.

Instead of running out of fossil fuels, the Earth's true energy crisis turns out to be their effect on temperatures here when burned. Sadly, it will take more than a single paper to solve this.