James Maxlow has released another book that comes highly recommended: 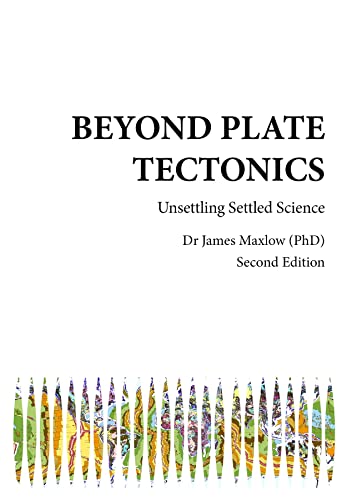 James has been gracious enough to share his book for FREE to the world on his website:

Dr. Maxlow has been discussed previously as well as expansion tectonics generally:

Unfortunately Dr. Maxlow does not appear to set forth any hollow planets groundwork or theory, but his work and theory appear to be (more than) compatible with hollow planet theory. His Amazon.com summary says:

Science is never settled. New revolutionary ideas have always overturned the settled sciences of the past. In this far-reaching book the author looks beyond plate tectonics in order to detail the next Earth science revolution. Drawing upon his work from four decades as a professional geologist and researcher the author reveals the weaknesses of conventional plate tectonic theory. This research utilizes an extensive range of global observational data in order to reverse-engineer geology back in time. Reverse-engineering seafloor and crustal geology enables past plate assemblages and configurations of the ancient continents to be accurately constrained using geology rather than geophysics. From this, a series of spherical geological models of the Earth are presented showing the precise locations and configurations of the ancient continents, ranging back in time to the early-Archaean. These plate assemblages represent the first time that models of the ancient Earth have been geologically constrained back to the early-Archaean. An extensive range of additional global observational data are then displayed on these spherical models in order to quantify the location of the ancient poles and equator, climate zones, biogenic distributions, exposed lands and seas, as well as global distributions of hydrocarbon-based and metallic resources. The research outcomes presented in this book are applicable to all disciplines of the Earth sciences and will appeal to a broad range of professional expertise, in particular those with a grounding in the Earth sciences. It is a must read for undergraduates and professionals alike.

James Maxlow was born in Middlesbrough, England, in May 1949. His passion for geology was inherited from a family history of ironstone workers who supplied iron ore extracted from the Eston Ironstone Mine to the foundries and rolling mills of Middlesbrough, during the early 1800s to mid-1900s. He immigrated to Australia with his parents in 1953 where he grew up in Melbourne. He studied Civil Engineering at the then Swinburne College, but soon became disillusioned with engineering and redirected to geology at the then Royal Melbourne Institute of Technology, graduating in 1971. During his academic years James met and communicated with many like-minded scientists from all the world. James received his Master of Science in Geology in 1995, followed by a Doctorate of Philosophy in 2001 at the Curtin University of Technology in Perth, Western Australia, including a letter of recommendation from the University Chancellor for original thought provoking research into tectonics. --This text refers to the paperback edition.

@Soretna , the best statement made by Maxwell is that "science is never settled" :)) The mainstream scientists who would want us to believe otherwise , are just deluding themselves !

Plate tectonics is riddled with too many inconsistencies , so a new paradigm is a must for geological sciences to break the shackles of the past 100 years , that they've simply WASTED away .

@Soretna , in the midst of all this heightened volcanic activity in different parts of the globe , I think "Expansion Tectonics" , provides a much better explanation of what may actually be happening beneath the ground...