I found one comment below the video of particular interest:

This identification of the North and South poles is contrary to orthodox science, but Davis and Rawls insisted that orthodox science is incorrect. Davis designated the poles based on the direction of their spin and the effects they have on matter. "The spin is what governs the action of any particle in matter and is the correct analysis in identifying the positive or negative function of natural energies." [The Magnetic Blueprint of Life, 1979, p.27 (Amazon, Archive.org)] 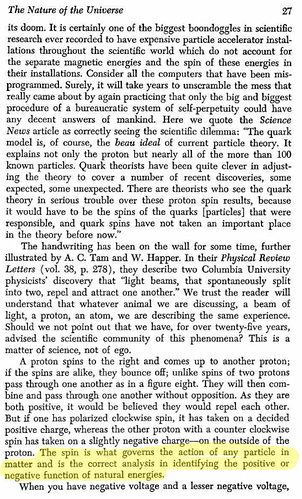 @Soretna , here's a relevant take on spin and electromagnetism :-

Does the electromagnetic field “spin”?

Can one generalize to say that the magnetic field thus would spin when a magnet is spun?

The property of "spin" of elementary particles is not caused because of their rotation.

You cannot obtain the magnetic field as you would in the classical case. Because charge zero particle also have spin so you cannot suppose that the charge is distributed in a tiny sphere and work out the magnetic field. – Prastt Jan 31 '13 at 15:46

Well, the quantum dynamical description of the electron (spin 1/2 particles) is given by Dirac's equation. When you couple this with an external electromagnetic field (vector potential) you get a gauge theory. The equations of motion in that theory include a term which is the interaction energy of the magnetic field with the intrinsic magnetic moment of the particle. That therm predicts the correct magnetic moment of an electron. I'm not going to repeat the calculation here because is rather lengthy, but you can check a quantum mechanics book I guess. – Prastt Feb 1 '13 at 5:34

The field equations for the spinning electromagnetic field can be derived from those of the conventional stationary field. They satisfy Maxwell's Equations and the Poynting vector can be shown to point in the direction of field spin. Computer modelling of the propagation of the fields using the FDTD (Finite Difference Time Domain) technique clearly show them to spinning. Also a practical experiment has been done to confirm that measurements of the spinning electromagnetic fields are as predicted.

Further details are available at http://mike2017.000webhostapp.com/ which includes field plots of the spinning fields.

Spin corresponds to quantized angular momentum. However a substantial fraction of the spin angular momentum of an electron is included in its surrounding electromagnetic field where a nonzero Poynting vector does exist everywhere outside of its spin axis. This electron-bound Poynting vector corresponds to electromagnetic energy-momentum density circulating around the electron. The local magnetic field at a given point is given by the electron’s dipole field while the electrostatic field results from the Coulomb-field of a point-like charge [1].

Please also note that neither an electrostatic field nor a magnetostatic field can rotate like a rigid body. This misconception would contradict Maxwell's and relativistic electrodynamics. See Spinning magnets and Jehle’s model of the electron.

Your statement "Maxwell's equations imply that magnetic fields are due to changes in electric fields." is not complete.

A corrected statement is that Maxwell's equations imply that magnetic fields are due to changes in electric fields AND due to currents (which can be stationary):

As you can see, the magnetic field 𝐇

has two "sources": the ∂𝐃/∂𝑡 part is due to varying electric fields as you said (where 𝐃 is the electric displacement), but the 𝐉

is the part due to the free currents. This is why a coiled wire with a constant current running through it creates a magnetic field (without need of changing electric fields).