Giants in The United States

@budcat7 has done and is doing some remarkable work with giant research. He's got a series "Giants State by State" where's just pulling so much valuable information together (also see his general video list for a lot of super interesting things):

This is a very interesting book (and author) mentioned in his most recent New Mexico video: 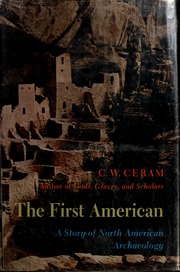 Ceram (a pseudonym for Kurt Wilhelm Marek) has a number of other very interesting books:
https://archive.org/search.php?query=creator%3A"Ceram%2C%20C.%20W."

As I have a chance to review @budcat7's work more carefully I wouldn't mind compiling a comprehensive list of his references and recommendations.

@Soretna , this is definitely something we've not seen before....will look forward to the additional content you have on this topic .

Speaking of giants, what Olaf tells us of the hollow world is that his father was 6’ 3”, and didn’t rise above their waistlines.

“Finally, the leader motioned as if to ask whether we were willing to leave our craft to go on board their ship. "What say you, my son?" asked my father. "They cannot do any more than kill us." "They seem to be kindly disposed," I replied, "although what terrible giants! They must be the select six of the kingdom's crack regiment. Just look at their great size." "We may as well go willingly as be taken by force," said my father, smiling, "for they are certainly able to capture us." Thereupon he made known, by signs, that we were ready to accompany them. Within a few minutes we were on board the ship, and half an hour later our little fishing-craft had been lifted bodily out of the water by a strange sort of hook and tackle, and set on board as a curiosity. There were several hundred people on board this, to us, mammoth ship, which we discovered was called "The Naz," meaning, as we afterward learned, "Pleasure," or to give a more proper interpretation, "Pleasure Excursion" ship. If my father and I were curiously observed by the ship's occupants, this strange race of giants offered us an equal amount of wonderment. There was not a single man aboard who would not have measured fully twelve feet in height. They all wore full beards, not particularly long, but seemingly short-cropped. They had mild and beautiful faces, exceedingly fair, with ruddy complexions. The hair and beard of some were black, others sandy, and still others yellow. The captain, as we designated the dignitary in command of the great vessel, was fully a head taller than any of his companions. The women averaged from ten to eleven feet in height. Their features were especially regular and refined, while their complexion was of a most delicate tint heightened by a healthful glow. [Footnote begin, Italic] "According to all procurable data, that spot at the era of man's appearance upon the stage was in the now lost 'Miocene continent,' which then surrounded the Arctic Pole. That in that true, original Eden some of the early generations of men attained to a stature and longevity unequaled in any countries known to postdiluvian history is by no means scientifically incredible." - Wm.F.Warren, "Paradise Found," p.284. [Footnote end, No Italic]

Both men and women seemed to possess that particular ease of manner which we deem a sign of good breeding, and, notwithstanding their huge statures, there was nothing about them suggesting awkwardness. As I was a lad in only my nineteenth year, I was doubtlessly looked upon as a true Tom Thumb. My father's six feet three did not lift the top of his head above the waist line of these people. Each one seemed to vie with the others in extending courtesies and showing kindness to us, but all laughed heartly, I remember, when they had to improvise chairs for my father and myself to sit at table.”

How about "Giants in Ecuador" ? 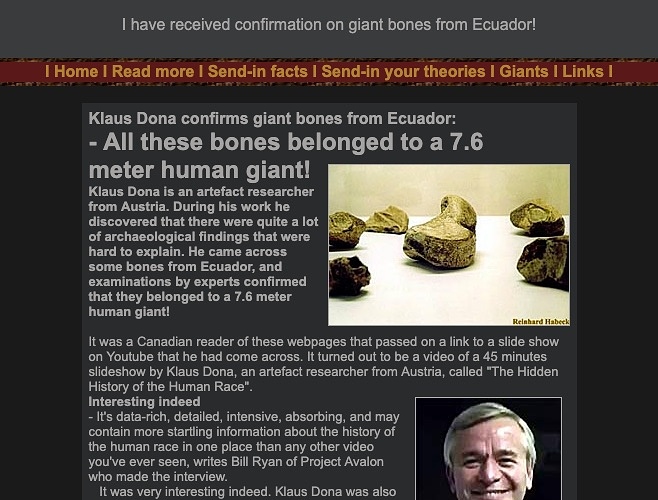 @deandddd , these giants of Ecuador could well be connected to the famous Tayos underground caves , that even Neil Armstrong had come to explore with a large team .

The members of the Orellana expedition - the first expedition to follow the entire length of the Amazon River - dedcided to rest for a while in a friendly indian village after they had crossed the Andes Mountains. They were in the Peruvian Amazon area. Anyway, one day they were totld that some people would come from some distance to meet with them within a few days; and they did.

They seemed to be Chinese, they were very pale. And their hair was very black and very fine/thin, as the Asian hair is. And they were , what we would call in measurement, eight inches taller than the "tallest" Spaniard among them! They were dressed in very fine cloth, embroidered, and their manners were gracious and refined. (This is impossible among the jungle indians in South America)

Yes, only those who are born and bred below the surface grow so tall. And the Tayos area, as far as river transportation is concerned, isn't so far away from that place. Of course, there must be other underground worlds in that region.

I believe that, in general, indian populations are guerrilla warfare forces whose job it is to guard the openings. This leaves open the possibility that the race and culture of the populations below are ddifferent.

And the fact that the Chinese had QUITE a presence in Peru on the Pacific is indisputable. There was even a village near the Colombian/Perucian border, behind Equador, where the Chinese of Cham Cham was spoken until the end on the 1800s when it died out.

I could go on and on about the Chinese in the Americas, but I imagine that they want to recover their domination of the surface in order to protect their worlds below.