Giant magnetic tunnel made of rope-like objects might 'cover' Earth and everything else in the Milky Way ! 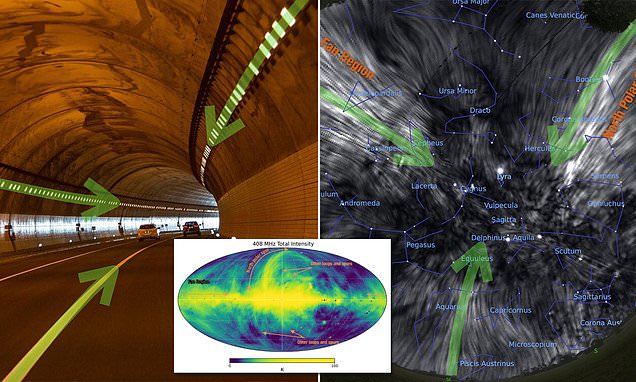 An astronomer with the University of Toronto designed a model that found the North Polar Spur and the Fan Region are connected and form a massive magnetic funnel around our solar system.

Giant magnetic tunnel made of rope-like objects that sits 350 light-years from the solar system might 'cover' Earth and everything else in the Milky Way, study suggests

A new model suggests the solar system is surrounded by a gigantic magnetic tunnel.

The proposal comes from University of Toronto astronomer Jennifer West, who is basing the hypothesis on two structures in the sky: The North Polar Spur and the Fan Region.

After building a computer model, West believes the structures, made of rope-like filaments, sit 350 light-years from Earth and are about 1,000 light-years long.

The structures, first observed in the 1960s, were initially documented as being separate, but West and her colleagues found the two form a connection that 'looks like a tunnel around our solar system,' according to a press release.

West and her team provide a simple example to explain the idea: 'A curving tunnel, with lines formed by the tunnel lights and road lane markers, forms a similar geometry to the proposed model of the North Polar Spur and Fan Region.'

'If we were to look up in the sky we would see this tunnel-like structure in just about every direction we looked – that is, if we had eyes that could see radio light,' West said in a statement.

Scientists provide a simple example to explain the idea: 'A curving tunnel, with lines formed by the tunnel lights and road lane markers, forms a similar geometry to the proposed model of the North Polar Spur and Fan Region' (pictured)

The North Polar Spur is a large ridge of hot, X-ray- and radio-emitting gas that rises above the plane of the galaxy.

It appears as a massive yellow cloud that begins near Sagittarius and extends to Scorpius, Lupus and past Centaurus.

A Harvard paper published in 1980 suggests the ionized gas within the mysterious cloud may be caused by hot stars or by X-ray emission.

To the west sits the Fan Region that features polarized radiation. 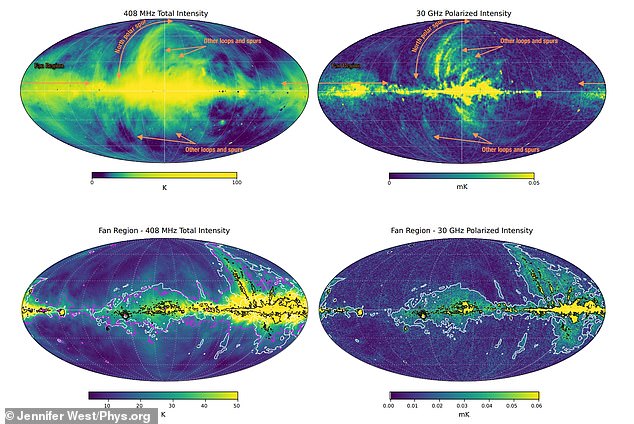 The proposal comes from Jennifer West, an astronomer at the University of Toronto, who is basing this hypothesis on two mysterious structures in the sky: The Polar Spur and the Fan Region

West and her team created a computer model that calculated what the radio sky would look like from Earth as she varied the shape and location of the long ropes.

The model allowed West to 'build' the structure around our planet, showing her what the sky would look like through our telescopes and allowed her to match the model to the data.

'A few years ago, one of our co-authors, Tom Landecker, told me about a paper from 1965 – from the early days of radio astronomy,' West said.

'Based on the crude data available at this time, the authors [Mathewson and Milne], speculated that these polarized radio signals could arise from our view of the Local Arm of the galaxy, from inside it.

'That paper inspired me to develop this idea and tie my model to the vastly better data that our telescopes give us today.'

The team is planning on completing even more complex modeling in the future — with the hopes of uncovering and understanding what role the magnetic tunnel plays in the galaxy. 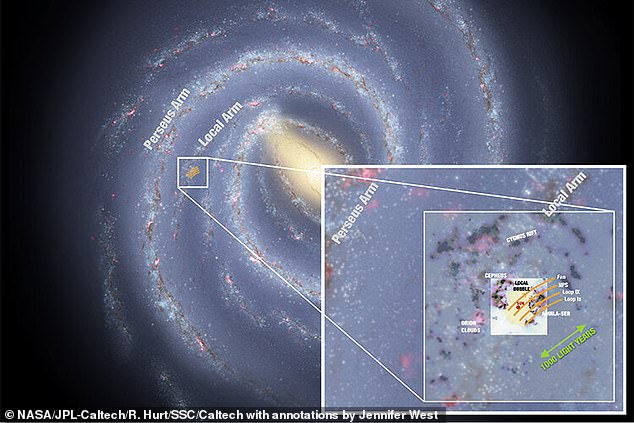 Illustrated map of Milky Way Galaxy shown with the position and size of proposed filaments. Inset shows a more detailed view of the Local environments, and the position of Local Bubble and various nearby dust clouds

'They all must to connect to each other. So, a next step is to better understand how this local magnetic field connects both to the larger-scale galactic magnetic field, and also to the smaller scale magnetic fields of our sun and Earth.'

In the meantime, West agrees that the new 'tunnel' model not only brings new insight to the science community, but also a ground-breaking concept for the rest of the world.

'I think it's just awesome to imagine that these structures are everywhere whenever we look up into the night sky.'

@sidharthabahadur I can't help but smile at the scientific community interpretations. In relation to the tunnels what they are witnessing are oscillation. The "tunnels" are formed from expansion of platonic vertices. This I have proof. How sound/ether travels is only via the vertices which expand into vortices. The lights are the energy states(photons) or mass particles which travel and form at edges of these vortices. And yes everything is connected.

Well spoken @Echo_on , please mark my words - the discovery of this "magnetic tunnel/magnetic rope" in space , surrounding our Solar system is like light at the end of the tunnel :))

On a more serious note , this finding that has far reaching implications for Astrophysics , will hopefully cause the much needed course correction in mainstream science .

My personal opinion - Jennifer West deserves the Nobel Prize for this breakthrough !

Folks , the Electric Universe Theorists are certainly thrilled by this new discovery - now let's see what their next move is to bring their theory to the center stage of Astrophysics !