I find posts like this fascinating since they really reveal how far off base and ridiculous current geology and "science" is and can be with their ideas and proposals. Of course don't question such things like this openly or someone might come knocking at your door or you might lose your job if you work in any of the fields of "holy cow" "science": 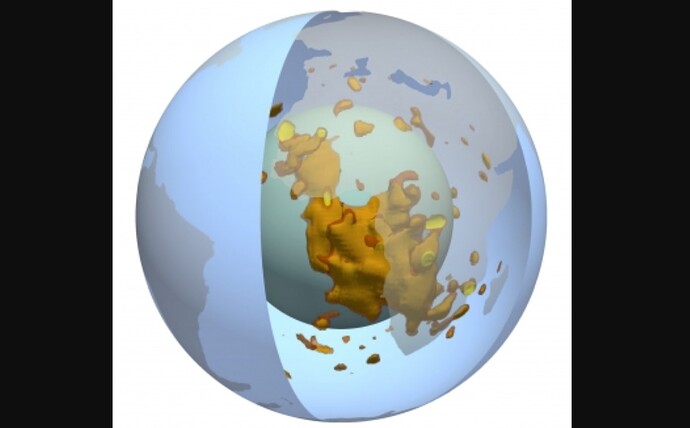 Earth is layered like an onion, with a thin outer crust, a thick viscous mantle, a fluid outer core and a solid inner core. Within the mantle, there are two massive blob-like structures, roughly on opposite sides of the planet. The blobs, more...

We again go back to how seismic waves are completely and totally mis-modeled presently and it clearly shows such a laughable situation, if it weren't so serious... Imagine, if only they had proper modeling... Things like "global warming", petroleum availability and even pollution (as crappy as that can be) could be entirely reframed and better understood. No one really has any idea at all about anything right now and, for example, all estimates of crude oil availability are entirely fabricated and tuned for desired biased narratives/propaganda vs reality.

@Soretna , I agree...abiotic oil , from INORGANIC processes (!!) deep within the Earth , in particular is one of the biggest truths being hidden by mainstream geologists !

I'll agree that the orthodox presentation doesn't know much about the planet Earth.

40 years ago your
discipline was in a position to lead all of science into a new age of discovery
but you wimped out. You, basically, had no balls.
You could have given a growing Earth theory an open chance for a complete
examination, but you closed your doors.
WORSE,** you accepted subduction, a theory that has not been seen or proved for
all these 40 years, as gospel out of fear.
Why did you do it?
You were
bullied into it. But worse again you allowed yourselves to be bullied shame!
Nothing, **nothing in the "proofs" of subduction is
there that can't easily be explained by another concept within the plate
tectonics.
You will be the laughed at generation of geologists who believed in the
subduction theory. Just like those who believed the Sun went around the Earth
or the Earth was flat and you could fall off the edge. You are the duped generation of geologists.
Let me rip at your heart and brain for a few minutes, and give you a chance at
redemption.
As a geologist did you ever sit and contemplate a group of geodes?
Some, cut
apart, or one, simply together, as a rock? Fascinating, aren't they?
Humble things, geodes? Hmmmmm?
What if I told you that a geode was a model for the Earth, all planets, moons
and even suns?
I mean even without deep discussion, you do see the similarities yes?
They're round for the most part. They have a crust of many types of material. Then
under that crust it's more crystal, but the crystal is randomly angled as if it
were adjusting to new random angles, but further in the angles are clearly
pushing outward (and inward) perpendicular to the surface, unlike the
near-surface angles.
These crystals, as you know, are straight sided like, say, basalt or iron. Straight-sided
crystals aiming outward are in an odd place being in a ball. Because the ball
shape resists the straight sided being larger on the outside, smaller on the
inside. So the crystals are irregular lengths going inward. They all can't grow
inward regularly, can they? They would compress tighter and tighter. So they
accede to their neighbor longer shafts going in.
Yes, molecules do add to the inner ends creating compression and having no
inward release they must push outward. This is growth without life! (A stepping
stone for life, perhaps.) Now this is physics, of course, and you geologists
don't talk to physicists much, so you wimp out.
They would tell you if straight sides grow within a sphere, inward they will
push outward and as a result the geode will grow outward!
**So, a geode grows!**It does? It must!! That's physics!!!
Well, how do you get geodes otherwise? They are not naturally occurring rocks,
are they? In fact are rocks naturally occurring rocks?
No. There is a process and events that lead to the creation of rocks. Sedimentary
action and cooling of magmic or volcanic material. What about silicate growth?
So geodes? Well we have similar occurring crystal in caves growing. Well, yes
in fact, these crystals are characterized as growing. That is how we believe
they got there like sugar crystals on a stick, or like salt crystals
underground. They grew, well, added molecules, or atoms, and grew. Otherwise,
how would they get there? The molecules float through water or air and attach
to like molecules and grow the crystalline body.
Why do they attach to like molecules and not just any molecule? How many
molecules float by and are allowed to attach? Only
one kind attaches.
So, geodes must must grow! Or, else how could they get there? They are crystals.
I don't know overly much about geodes. I know they grow in swamps. Yes, but
they, also, grow in sand and pumice. (Ash.)
So it's not water that carries all molecules into geodes. It's air. They float in the air or through the ground like gas.

That's why we don't have iron geodes on Earth. Iron is a heavy atom and there's not enough
heat at the surface to "float" an iron atom in the air. This is true
about many atoms and molecules. But sodium and chlorine gas will rise up within
the upper Earth and form salt crystals to gather in lobes underground.

As to iron if iron atoms are, let's say, made or produced in space with out a
gravity to "pull them down" (A meaningless term in space.) they will
float and assemble into iron geodes in space, and grow like all geodes from the
inside.

We call this an iron meteorite.

How do we get iron atoms in space? Well I'm afraid you have to bring a physicist into
the discussion, which you won't, so don't worry about it. Assume iron atoms in
space. You've got iron geode meteorites! Oh, your friends say iron meteorites
come from uh blown up planets? I'm sorry, I ah wasn't sure I heard that right. Somebody
blew up a planet?

"Ming The Merciless", or "Darth Vader"? Maybe it's that
rogue planet that once crashed into Earth and gouged out our Moon and left that
big hollow place around Asia and Africa .

There's one planet on each electro magnetic line around the Sun except for our
planet. Asteroid belt line. Jupiter doesn't seem to be letting that potential
planet assemble.

There's ah no planet missing. But what would blow this mystery planet up Oh I see
you're punking me. Nuff said, I get it.

Do you believe planets only exist in orbits around the Suns? Or am I an idiot? Otherwise
there aren't . Rrrrrreally planet sized things are there? Some big meteorites
in random orbits perhaps, but planets to be blown up? No! It's silly!

Meteorites grow like geodes. There's an empty center space inside inside of all
meteorites did you know that?

And all the material grows outward. Outward, like with a geode! You ever look
at a cross section of a meteorite etched by acid, so you can see the crystal
formation? As the meteorite gets bigger and bigger the crystal growth looks
more and more pushing outward, in a more and more organized way. More like a
geode. In cold space how would a meteorite grow? You've seen crystalline growth
haven't you?

Let me ask you, geologist, an iron meteorite picks up an iron atom not a clump,
just a single atom. Does the atom, as a gas, (Which it is, right?) sit on the
surface or will it follow gravity to the center of the meteorite at the geocentral
core to attach to the growing iron crystal there.

By the way, geologist, did you know that meteorites have an outer skin? A skin, just like a geode.

Rocks don't have skins do they, fellows?

Earth and all
planets, moons and suns have skins, don't they?

Drop me a note.

Yes @deandddd , this open letter from Neal Adams to all who call themselves "geologists" is truly , quite a gem :))