I think that pyramids and constructions such as Machu Pichu are outpost-entranceways to subterranean worlds below. I know that the Egyptian Book of the Dead speaks of them, i.e., below Egypt and the pyramids are in Egypt.

I AM RE-SENDING BECAUSE THE MIDDLE PICTURE IN THE FIRST POST WAS WRONG.

I have uploaded two images from the book Our World Vedic Heritage, by P.N. Oaks, and a page of explanation. The images are of an Egyptian Pharoah and a priest architect.

Be sure to expand the images by right clicking. 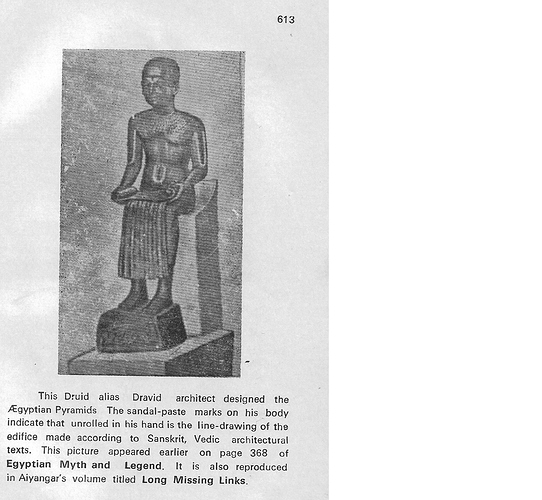 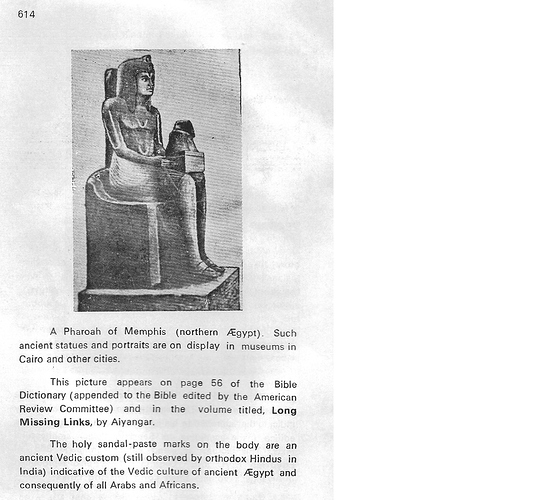 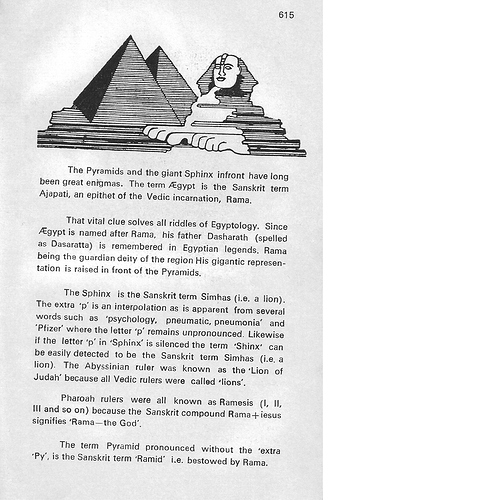 I have no doubt that the priest is a brahmin because he uses the U-shaped sandalwood markings on his body; these are the markings of the followers of Vishnu. But I don't think that he had to be a brahmin from India, he could have been a brahmin from Egypt.

To tell the truth, there is every reason to conjecture that the race of South India back then, and the Egyptian race, were the same. On Page 610 of the book, Oaks writes: "Eusebius, a Greek writer, has recorded that the Ethiopians immigrating from the River Indus settled in the vicinity of Egypt'". Also, "Maxmueller has observed that the mythology of the Egyptians (and also that of the Greeks and Assyrians) is wholly founded on Hindu mythology".

And the fact that pharoahs and priests in Egypt had to do with Vishnu leads us to my first conclusion that Egypt was simply a Vedic community, going back thousands and thousands of years. "Vedic" is not a sectarian religion, to say "Vedic" just refers to a culture and civilization founded and fostered by the celestials. For example, Plato tells us that Atlantis was founded by the celestial Poseidon, the Demigod of the Oceans. And P.N. Oaks, on the explanation page (annexed), explains that Egypt was much dedicated to Rama.

But as far as Atlantis is concerned, Plato explains that many, many generations after its founding, in due course of time, the Atlantean kings became corrupted. For example, they imposed the deification of man upon their subjects (the king was the deified man in this case). And although the cow and bull are considered worthy of human gratitude by the celestial culture, the Atlanteans began to make a public show of teasing and tormenting the bull in the form of bullfights.

So how did this happen? Who corrupted them? Well, it seems that the influence of the celestial culture waned, first of all. You'll notice that the celestial Vimanas (Saucers, UFOs) of Vedic times are no more! There are such craft but, by almost all witness accounts, they are piloted by those beings that we call "The Greys" and the "Praying Mantis" types. The Greys have wrap-around eyes like house flies do, and two flat orifices for a nose. These are demoniac species of life.

And secondly, according to the Egyptian Book of the Dead, there are cavern worlds below Egypt wherein hellish worlds exist.

It seems that Egypt began as a pious Vedic society, founded and fostered by the celestials, but that, as the Kaliyuga approached, Egyptian culture went down the same road as the Atlantean culture, and probably due to the same reasons; the influence of the underground and demoniac manipulation of the surface world; which has always been one of our main themes on this list.

This is no doubt why, on one hand, we see pious monuments and temples in Egypt. For example, the sphinx dedicated to Rama, who was described as "the lion hearted".

Also, the Dendera Temple Complex in Egypt - one of the best preserved - is definitely dedicated to the celestials. The Temple of Hathor is the main temple, and Hathor refers to a celestial Goddess, who seems to be the Hindu Aditi, because Hathor/Aditi is depicted as the mother of the God of the Winds Horus; and as the mother of the Sun God Ra. This is Aditi's role in the Vedic literature. Note that, in Sanskrit, a chief name of the Sun God is Ravi, so we see the link between Ra and Ravi.

But on the other hand, we also see glyphs and deities of weird, hybrid types of entities such as humans having animal heads. These are not celestial deities, these are underworld deities.

So my deduction is that these civilizations started off under the influence of the celestials, bu then fell under the influence - one way or the other - of the underground worlds of the demoniac species; and then other types of entities began to make their appearance in Egyptian society.

I did up the post above, embelished it a bit, and put up a link on my site. Now you can pass along the link to your friends.