List members , we hollow planet researchers have often contemplated the possibility of concentric shell structure for Hollow Planets (and stars) , but now here is a stunning image of a star, taken by the James Webb Space Telescope that provides some credence to that possibility :-

The Universe, truly, is full of wonders, and the James Webb Space Telescope has just given us our best views of one of them yet.

The Universe, truly, is full of wonders, and the James Webb Space Telescope has just given us our best views of one of them yet.

The object in question is a star around 5,600 light-years away, and Webb's infrared eye has picked out an extraordinary detail: it's surrounded by what appear to be concentric rings of light radiating outward.

While Webb's characteristic diffraction spikes are not 'real', those concentric rings are – and there's a wonderful and fascinating explanation for them.

The star is actually a binary pair of rare stars in the constellation of Cygnus, and their interactions produce precise periodic eruptions of dust that are expanding out in shells into the space around the pair over time.

These shells of dust are glowing in infrared, which has allowed an instrument as sensitive as Webb's MIRI to resolve them in exquisite detail. 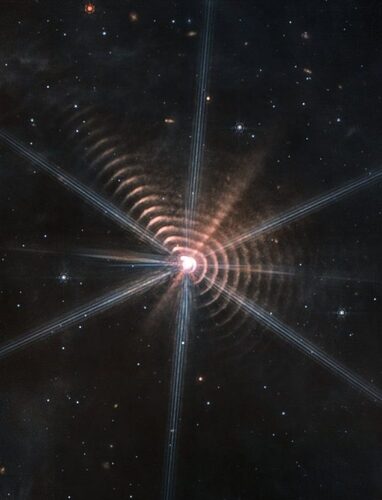 The full image as processed by Judy Schmidt. (JWST/MIRI/Judy Schmidt)

The star is what is known as a colliding wind binary, consisting of an extremely rare Wolf-Rayet star, called WR 140, and a hot, massive O-type star companion – another rare object.

Wolf-Rayet stars are very hot, very luminous, and very old; at the end of their main-sequence lifespan. They are significantly depleted in hydrogen, rich in nitrogen or carbon, and losing mass at a very high rate.

O-type stars are among the most massive stars known, also very hot and bright; because they are so massive, their lifespans are incredibly brief.

Both stars in the WR 140 system have fast stellar winds, blowing out into space at around 3,000 kilometers (1,864 miles) per second. Both are therefore losing mass at a pretty furious rate. So far so normal, for both stars.

When the two stars enter periastron – a distance about a third greater than the distance between Earth and the Sun – they become close enough that their powerful winds collide.

This produces shocks in the material around the stars, accelerating particles and generating energetic radiation, such as X-rays. These colliding winds also induce episodes of dust formation as the material in the colliding stellar wind cools.

This process can be seen in the animation below, which shows what the system would look like from the top down.

The dust is a form of carbon, which absorbs ultraviolet light from the two stars. This heats the dust, causing it to re-emit thermal radiation – which is what is observed by Webb in infrared wavelengths.

The dust is then blown outward by the stellar wind, resulting in the expansion of the partial dust shells. They expand and cool as they are blown outward, losing heat and density.

Because the binary star's orbit has a 7.94-year period, the wind collision and dust production occur like clockwork every 7.94 years. This means you can count the rings of the nebula around the binary, like tree rings, to determine the age of the outermost visible dust shell.

Around 20 rings are visible, which means you can see around 160 years' worth of dust shells in the Webb image. The most recent WR 140 periastron was observed in 2016.

Webb's observation of WR 140 was requested by a team led by astrophysicist Ryan Lau of the Japan Aerospace Exploration Agency's Institute of Space and Astronautical Science.

They're preparing a paper on the observations, so it's possible that we're on the brink of finding out something new about this fascinating , crazy star .