Does Elon Musk Believe the Earth Is Hollow?

I was casually searching for something totally unrelated and came across this somewhat strange news story from last year: 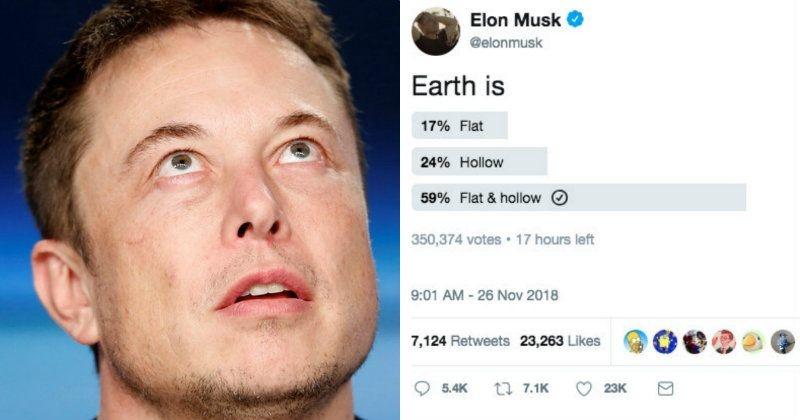 Elon Musk Started An Online Poll To Troll Flat Earthers, And The Reactions...

Is the earth flat? Or hollow? Or both?

Apparently the multi-billionaire Elon Musk made a poll on Twitter last year which reads as follows: 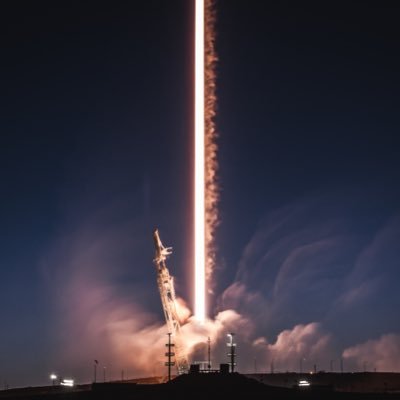 Perhaps it was just meant as a joke, but I find it interesting that more people voted that the earth is hollow instead of flat. Granted, the overall majority of votes said the earth is "flat & hollow," which indicates to me that this was largely interpreted as a joke, but nonetheless it is curious.

I think it's intriguing that Musk even included "hollow" as an option in the first place. There are very few people who even know of Hollow-Earth Theory, and most who do know of it believe it. Only those who are ignorant or deliberately deceitful would discount it.

So do you think that Elon Musk secretly believes the earth is hollow? He sure seems like an interesting character.

@Ephraimite , seeing your post , I just got a brainwave of a different sort !

Elon Musk is just the sort of maverick billionaire with the guts to finance Hollow Earth research , provided he can be approached somehow through the right channels .

Also yes , I do believe , there is a subtle hint Elon Musk has dropped here of him at least being "open" to the idea of a Hollow Earth . Moreover , he is in dire need of redeeming himself , after he recently disgraced himself with his loose statement about the rescuer of boys from an underwater cave in Thailand...just the kind of situation where he might agree to support Hollow Earth research and restore his public image :))

@sidharthabahadur Interesting idea. I'm not sure whether hollow-earth research would "restore" his public image though; it might give the media the perfect opportunity to dissect and denigrate him. However, depending on how "open" he really is to the idea, maybe he would be willing to fund something like this nonetheless.

But it would have to be a serious, organized effort based in rigorous, precise science. I fear that right now there's not nearly enough cohesion within the scientific arm of Hollow-Earth researchers to be attractive enough for investors. The other problem with Hollow-Earth Theory is that it blasts away the current paradigm. Many rich people would therefore be unwilling to even touch it, lest they incur the ire of the academic establishment and those who support them.

I'm not following the latest news on him so I'm not quite sure what you're referring to with his statement about Thailand.

Hmm, it is sure interesting that he is involved in both space ventures as well as making his underground "Hyperloop" project via his company: "The Boring Company"

It certainly sounds like he would have far, far more ready access to information than 99.99999999% of the outer surface population.

I believe, however, it would take someone who is both wealthy and/or influential themselves even to become associated or friends with him in the first place in order to begin such collaborations...

Regarding Thailand, see this search for news.

He certainly does have far more information to ascertain the true nature of the hollow earth than the rest of us! Fascinating.

@Ephraimite , @Soretna , what an excellent position Elon Musk is in to really push the envelope on Hollow Earth research , should he only choose to do so .

One strong clue about Elon Musk's "scientific ideology" is the name he has given to his car company - TESLA ! He sure is giving sleepless nights to other automobile majors as also the petroleum companies .

Also , his Space X company has just launched a swarm of satellites into space , so he literally has a "balcony class" view of the Earth .

His ambitious Hyperloop project and an attempt to build an underwater drone to rescue people from underwater caves , shows an active interest in what lies beneath...

@sidharthabahadur Yes, my thoughts exactly... now the only trick is for one of us to convince him to do it

@Ephraimite , the payoffs for Elon Musk , his ROI , if he actually invests even a small fund into a project on Hollow Earth research , could be...should we say astronomical !!? :))

Not to mention the fame he craves , for not just proving that the Earth & other planets are hollow , but also , the biggest prize of all : ushering in a whole new paradigm of science . I would say it's the most tempting offer anyone could make to the egoistic and flamboyant Elon Musk ?!

The big million dollar question is - now who will bell this fat cat ???

I have to believe that he already works in this arena and we simply are fantasizing that we could instigate his interest. What we need to ask ourselves is: what can we bring to the table and how can we befriend him so that we can collaborate in what is probably an already advanced level of understanding. I don't doubt someone like this would not only be privy to such info, but have various agreements in place with those that want to keep this information away from those that would case the "swarms" from invading their homeland(s) (both crustal-intras + inner-concave-intras)...

Hmmm. I believe we have to be a bit more creative than simply researching things here. We ourselves must elevate ourselves to higher influential stature in order to collaborate and intermingle in such circuits. I know just how to make this happen, but it doesn't happen via traditional research and effort like we're putting forth here... BUT what we are doing here is critical nonetheless and very important!

We certainly need to keep our efforts going here, but I believe building these kinds of relationships will fruit much further with one another once other means are in place.

The other alternative is to do, as suggested, a grassroots funding effort and to broadcast it all, but I do believe that that is ultimately perhaps a harder path that would be met by much resistance as we've seen hitherto with rather flimsy and ineffective means such as the trips up there and so forth that were easily shut down.

@Soretna , it's good that you are keeping us from getting too carried away :)) .

I see your point and we definitely need a reality check on our own chances of being able to convince a billionaire investor .

Elon Musk seems relatively more likely than other business tycoons to try his hand at a more "risky" venture , but we really don't know to what degree he is under the influence of "the powers that be" , or not ??

@Soretna , Folks , I am wondering if we can really trust the image that Elon Musk has projected in the media - that of a radical innovator , a maverick , an original thinker etc. etc. ?

Hmmm...if yes , then this Billionaire is not all about money...he could have made as many dollars as he has by pursuing "safer businesses" , but has clearly chosen not to . It suggests he is not only after the money .

Just in case the above conjecture is correct , then he could well be open to accept a proposition that guarantees him everlasting glory in the world of science...and to think it is so easily within his grasp .
What a privileged position to be in...so here's the litmus test of his real nature :-

If he is what he has projected himself to be , then Elon Musk would be receptive to our Hollow Earth Research ideas . If not , he might well be another fake like Mark Zuckerburg , whose disguised as a "change agent" !

In case you and some other members of this group are interested , I am willing to contribute my efforts towards any attempt we make to try and somehow connect with Elon Musk .

What do you all say ?

I've very much wondered, in the past, if this is not a "Bruce Wayne" situation...

Lol, but Tony let the proverbial cat out of the bag...

I think Bruce Wayne, in that regard, is a little more socially savvy...

It had never occurred to me that Elon Musk was or could be interested in hollow earth. If he genuinely is, and can get to the poles, it would be great if he funded an expedition there.

If he does then he would not ever let anyone know this until the vile status quo has been overturned. I see very little chance of being able to pursue this even mildly overtly. Basically any and all things related hereunto will have to be done covertly at this point due to the hold the cavern dwellers have upon the outer surface society. There are more than enough stories and television shows that mock in plain sight the fact that they know that we know and that we cannot do anything about or with our knowledge. It is an old drama and hardy laugh that they like to have at our expense and the expense of Good.

If we know that the earth is hollow, and we're not really so unique; then he who is involved with space flight, nothing less, must know that the the Earth is hollow. I doubt that they would even let him up there if he wasn't in on the secret because, even from an equatorial orbit, the orifices would be visible. Specifically, that which spews out of the orifices would be visible.

The Arctic explorers of yesteryear communicated that there is always a small aurora visible near the Polar areas, always visible from the higher latitudes. At least one orifice is going to be in darkness, and some kind of a pilot light of an aurora, or light caused by the friction of particles, is going to be visible. Maybe a very low equatorial orbit would not show it.

We've seen those Japanese weather-satellite video clips of the northern orifice filled in, and filled up, by clouds; it is quite round in its shape. Daytime clips. But we never see an image of an orifice in the darkness of the long polar night.

I think that any astronaut is in on the secret, too, or else he/she wouldn't be allowed to go up there.

@deandddd Those are very solid points which I hadn't thought of before. I never realized that Musk probably has to be in on the hollow-earth secret for him to even be up in space to begin with. It adds a whole new significance to his comments which I wrote about in the original post on this thread.

And you're right, I'd imagine that many astronauts have to observe something or other which tips them off, too. This has pretty big implications for the moon landing, among other things.

I too would love to see clips of the opening orifice at nighttime, but I'm not aware of any such clips myself. I imagine that's something they try to keep hidden, as that would be a major PR disaster if folks like us caught wind of it...

We have to find out if the Apollo astronauts followed a completely equatorial orbit, or an orbit with an angle, because an angled orbit would have given the astronaut in orbit a nice angle of vision towards the lunar orifices.

@deandddd This appears to be a very detailed article about the Apollo mission's trajectory / orbit, but I'm not an astrophysics expert so I didn't scrutinize it too closely. But I think it might have something in there about whether it took an equatorial or angled orbit:

How Apollo Got To The Moon

I'm posting this at 13:32 GMT on 16th July 2019—exactly fifty years after the launch of Apollo 11. It's the last part of a loose trilogy of posts about Apollo—the first two being M*A*S*H And The Moon Landings and The Strange Shadows Of Apollo....