I found this image on the internet, honestly its kinda ridiculous. But I do think its funny some of the things it mentioned. "hollow earth", "Anuunnaki puppet show", "Life on the sun". 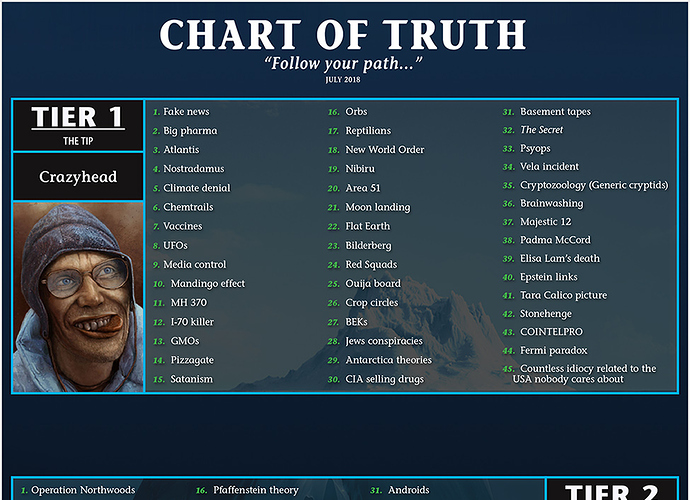 A little bit crazy though...

Isn't it "weird" just how many of these things have been not only documented incredibly well, but now here in 2019 are 100% unequivocally factual..... Strange, if not spooky stuff!

@PumkinLord Well, I've seen this image before. I wouldn't take it seriously. I think it's mostly for comedic effect or it's intended to misdirect people from real conspiracies and issues. Many of the things in tier 1 actually belong closer to the "bottom of the iceberg" and many things in the higher-ranking tiers are actually total bogus.

For instance, tier 1 (supposedly "tip of the iceberg" stuff) includes Pizzagate, Satanism, COINTELPRO, and psyops. Those four things alone (not to mention other items there) are very deep issues. Anyone who has a real or deep understanding of these issues knows that they are not "entry-level" topics. In fact, if you come across someone who knows a lot about these things, they are probably more enlightened than most people and should not be called "crazyheads."

And the higher-ranking tiers have some things that are totally fallacious. E.g., why does #37 in tier 14 say that Templars built the pyramids? Regardless of the many conspiracies about the Templars, I think everyone knows as a simple matter of fact that they lived many years after Ancient Egypt. These higher-ranking tiers also have items which sound insane. Why does #31 in tier 14 say "zero sum orgasm"? What even is that? Why does tier 15 say that "hiring a hitman on yourself" is somehow a supreme level of enlightenment? If anything, these higher-ranking tiers mostly seem to be supreme levels of insanity or comedy.

I also think this image was modified by several anonymous people across the internet to just make it say whatever they wanted it to say to be funny or misleading. Making people nosedive into unproductive rabbit-holes which make no actual sense is a great way to misdirect people from real conspiracies.

@Western0bserver Yes, I'd pay attention to tier 1 and leave the rest of the image alone. Maybe a select few items in the next couple of tiers. That would be plenty to do your homework on for many nights.

You might be right... I also wonder if some of these titles are names or terms that would lead someone to finding something out, or that they are terms that only someone familiar with the theory would understand. A lot of those are a bit nutty though, I really don't know enough to speak on it though...

@PumkinLord Yes, that's another problem I have with this image. Many of the items are too vague to even know what they're referring to. It almost seems like an "in-joke."

There is one thing listed that would explain calling everything a conspiracy to deflect. I be polite and not mention it.