Can a planet exist without a star ?? Yes it can !!

Folks , all I can say is that the conventional theory of planet formation is in serious trouble , basis of these recent discoveries - which also has a direct bearing on our understanding about the internal structure of planets :-

EarthSky | There may be 50 billion free-floating planets in our galaxy. 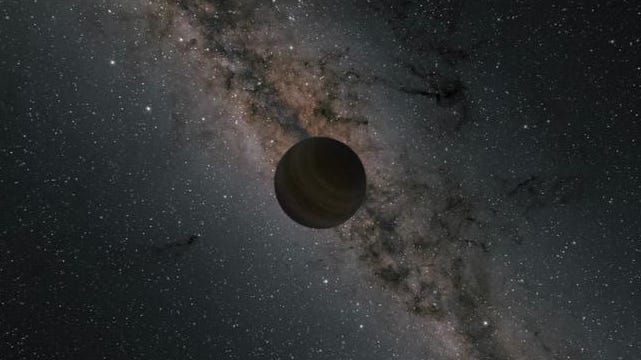 Can A Planet Exist Without A Star? $3.2 Billion Mission Will Count ‘Rogue...

NASA's upcoming Nancy Grace Roman Space Telescope will search across 24,000 light-years for 'galactic nomads' that move through space without orbiting a Sun.

Can A Planet Exist Without A Star? $3.2 Billion Mission Will Count ‘Rogue Planets’ In Our Backyard

Rogue planets are free-floating planets that do not orbit a star and instead travel through space. ... [+]

NASA’s next great exoplanet-hunting space telescope could find more “rogue” planets than there are stars in the Milky Way, according to a new study published last week in The Astronomical Journal.

It’s thought that there are between 100 billion and 400 billion stars in the Milky Way.

What are ‘rogue’ planets?

Rogue planets are those that move through space without orbiting a star. Often described as free-floating, they’re isolated bodies that are planet-like, having possibly been ejected from a star system.

However, astronomers don’t know whether rogue planets come from. They could be:

They also don’t know how many rogue planets there are in our Milky Way galaxy.
“If we find a lot of low-mass rogue planets, we'll know that as stars form planets, they’re probably ejecting a bunch of other stuff out into the galaxy,” said Samson Johnson, an astronomy graduate student at The Ohio State University and lead author of the study.

“This helps us get a handle on the formation pathway of planets in general.”

Cue NASA’s upcoming Nancy Grace Roman Space Telescope—also known as the Roman—which is due for launch in the mid-2020s.

How many ‘rogue’ planets are there?

That’s unknown, gut there could be a huge amount of them. “There have been several rogue planets discovered, but to actually get a complete picture, our best bet is something like Roman,” said Johnson. “This is a totally new frontier.”

“The Universe could be teeming with rogue planets and we wouldn’t even know it,” said co-author Scott Gaudi, a professor of astronomy and distinguished university scholar at Ohio State. “We would never find out without undertaking a thorough, space-based microlensing survey like Roman is going to do.”

Microlensing is one of the key skills of the Roman that will allow it to search for exoplanets much deeper into space than any other space telescope can.

It’s a technique that relies on the gravity of stars and planets to bend and magnify the light coming from stars that pass behind them from the telescope’s point of view. However, that effect is only visible briefly every few million years.

It will allow astronomers to find new types of exoplanets that they haven’t yet been able to see—including rogue planets—at potentially thousands of light years from Earth.

Finding rogue planets being microlensed will require incredible sensitivity, but the study’s authors argue that the Roman will be 10 times more sensitive to rogue planets than other space telescopes.

That said, it will only be able to find Mars-sized and large rogue planets, say the authors.

What is the Roman?

Formerly known as the Wide Field Infrared Survey Telescope (WFIRST) until being re-named the Roman earlier this year, it’s “Galactic Exoplanet Survey” is designed to find Earth-like exoplanets and help astronomers understand how the Universe expands.

The Roman is named for NASA’s first chief astronomer who was also known as the “mother” of the Hubble telescope.

However, although the Roman is often compared to the Hubble because it will have the same size mirror at 2.4-meters, the Roman’s wide-angle lens will give it 100 times the field of view that will allow it to map the Milky Way and other galaxies 100 times faster than Hubble.

According to NASA, the Roman has an expected development cost of $3.2 billion and a maximum cost of $3.9 billion.

“This gives us a window into these worlds that we would otherwise not have,” said Johnson. “Imagine our little rocky planet just floating freely in space—that’s what this mission will help us find.”

List members , the number of 50 Billion rogue planets & counting , is itself a STRIKING indicator that Jupiter like gas giant planets are born by the same processes that stars are born by...just that they turn into planets because of being below the critical mass .

Hard rocky planetoids like Earth & Mars are born as moons of gas giant planets that have shifted into independent orbits around their host star .