Aztec Archaeology: Brutal sacrifice systems of the Aztecs - ‘Death was just the start’ - more visualization of what comes with cavern world alignment?

What do you think about this true or trash - or somewhere in between? Does this give us strong visual representation of where a society lands when it aligns with the cavern worlders? Personally I think in consideration of the Cham and Tamil discussions and the people of South and Central America rooting from them and partnering with the cavern world realm creatures and beings, then this could bear out some truth and useful imagery regardless of the fake media's catching the story... 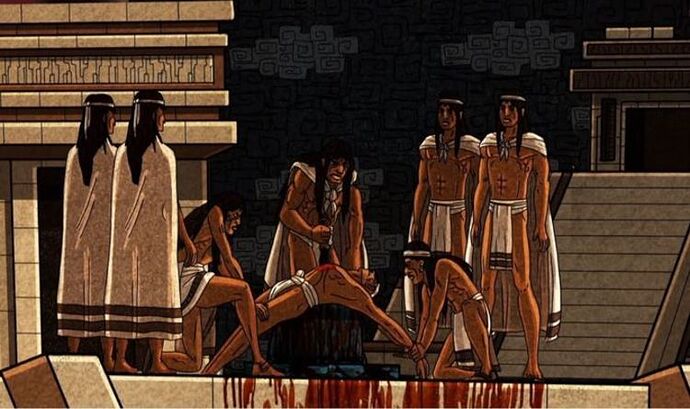 Archaeology: Brutal sacrifice systems of the Aztecs - ‘Death was just the start’

THE AZTEC EMPIRE had a horrific human sacrifice system, in which "death was just the start", a documentary revealed.

Last month marked 500 years since the fall of the Aztec Empire. Centred in Tenochtitlan, now Mexico City, the Aztecs built an enormous city in the middle of a lake after seeing an eagle with a snake in its beak perched atop a cactus - a sign from the Gods that the site was where their city was destined to be. The Empire crumbled under a combination of Spanish conquistador Hernán Cortés' men, and the diseases they brought with them. Yet, when Cortés and his men arrived in the Aztec capital, they witnessed an especially gruesome ceremony.

Aztec priests were sacrificing humans and offering their organs to the gods.

Historians had previously dismissed these reports as wildly exaggerated as a means of justifying the murder of Moctezuma, the Aztec emperor, and the enslavement of his people.

But discoveries in 2015 and 2018 at the Templo Mayor, the main Aztec temple in Tenochtitlan, site in modern-day Mexico City, revealed proof of widespread human sacrifice.

The discoveries revealed some of the reports from other Spanish conquistadors to be true.

Andres de Tapia, one of the conquistadors, had previously described two rounded towers on either side of the temple made entirely of human skulls.

Between them lie a wooden rack with thousands more skulls, with holes on either side to allow the skulls to slide onto the wooden poles.

She was looking at the Florentine Codex, which documents the culture and life the Aztec people lived through words and illustrations from native artists.

It has been described as “one of the most remarkable accounts of a non-Western culture ever composed”, and was declared a World Heritage by UNESCO in 2015.

The Mayan civilization, which was situated below the Aztec, also has skulls placed in a visible manner. They have walls going around their villages, they seem to have worked with cement, and row upon row of skulls in a line wereembedded in the cement. It easily adds up to a few thousand. And the sacrificialslab for cutting and hacking the live human were placed at the top of their pyramids in an altar room. The shafts behind the slabs go straight down to an underground stream, in a region where crocodiles and large serpents were common. They only built the pyramid temples over underground streams. The bodies were offerings to the reptile gods.