Folks , I am doing a deeper dive on the subject of planetary magnetic fields , it's a tell-tale sign about the true nature of the planetary core , it's veritable calling card . I think this is the best approach to dislodge the solid planet theory , because a valid explanation for planetary magnetic field is the weakest link in the mainstream theory .

**Just sample this incredible fact - the Magnetic field of Uranus and Neptune is OFF-CENTER i.e. not even symmetrically aligned to the center of those planets !

My research indicates that if planets were solid , their geographic poles would invariably coincide with their magnetic poles . However , in reality , not a single planet has EVER been found , for which the magnetic poles exactly coincide with it's geographic poles . Why is this so ? What does this indicate about the internal structure of planets ?? The answer is that all planets are hollow :)) 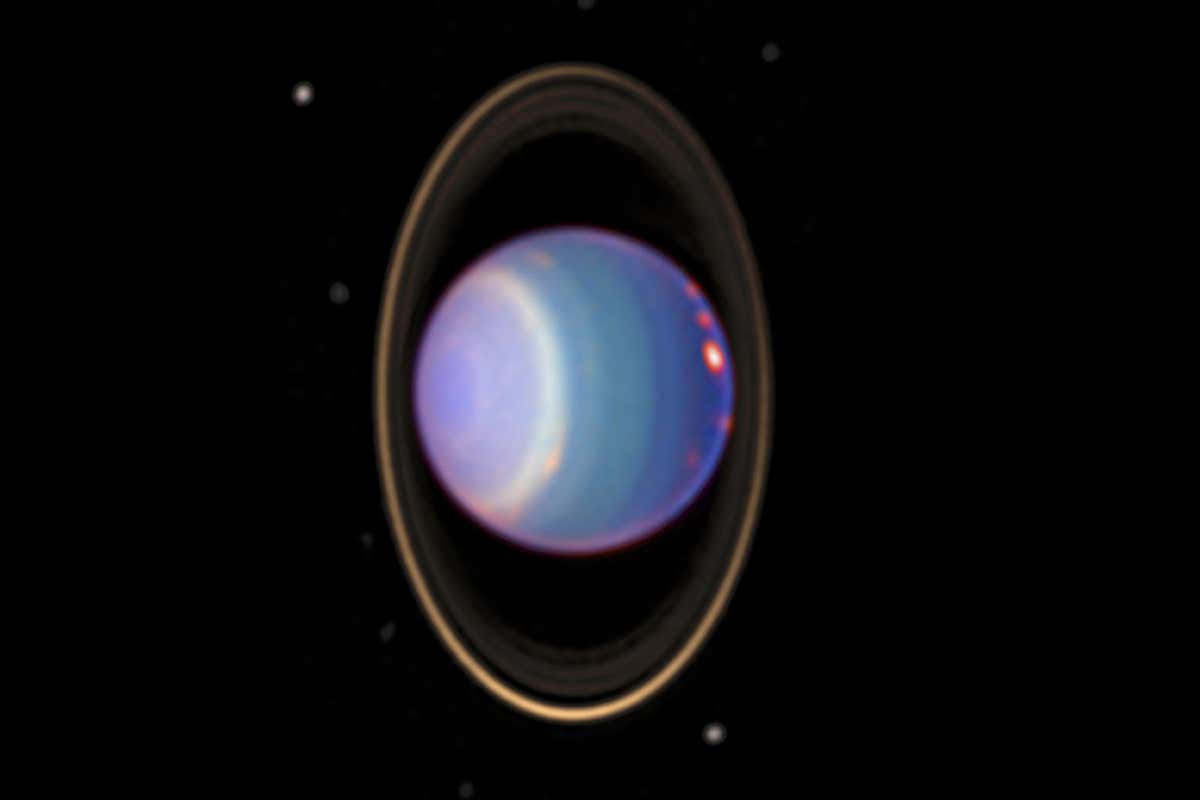 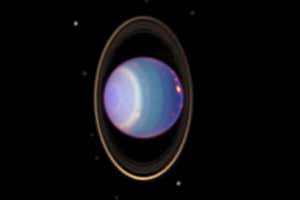 An open and shut case? Uranus seen in the infrared

Uranus has the weirdest magnetic field in our solar system, and it just got weirder. A new model suggests that the edge of its magnetic field bubble could be slamming open and shut every day.

Most of the planets in our solar system rotate around roughly similar axes, spinning in the same plane as their orbit. Their magnetic fields are aligned with these axes, with field lines emerging from the centres of the planets near their north and south poles and wrapping them in magnetospheres – protective bubbles of magnetism.

Uranus is not like most of the planets. It rotates on its side, tilted almost 98 degrees from the plane of its orbit around the sun. The axis of its magnetic field is tilted too, at a 59-degree angle from the rotational axis. The magnetic field is also off-centre, with the field lines emerging about a third of the way toward the south pole.

All of this makes Uranus’s magnetosphere a total mess. “As it is tumbling around, the magnetosphere’s orientation is changing in all sorts of directions,” says Carol Paty at the Georgia Institute of Technology in Atlanta.

To study the effects of this tumbling, Paty and her student Xin Cao created a model of the magnetosphere and its interactions with the solar wind, a stream of charged particles blown out by the sun.

The magnetosphere acts as a barrier to the solar wind: when the two are moving in the same direction, the solar wind slides off it like water off a duck’s back. But just as when water hits a duck’s feathers from the tail end, the duck gets wet, so when the solar wind blows toward Uranus at the right angle, the planet’s magnetic field lines up with the solar wind’s and lets some particles flow through.

This process, called magnetic reconnection, occurs occasionally near Earth’s poles, where the influx of particles from the solar wind can lead to intensified auroras. On Uranus, Paty and Cao found that it should happen every single day (roughly 17 Earth hours), switching the magnetosphere’s protection on and off. This could lead to an aurora there as well.

But it’s hard to know what exactly is going on at Uranus, since the only close-up observations we have are from 1986, when the Voyager 2 spacecraft whizzed past over the course of five days.

“We caught a glimpse of a mystery when we flew by,” says Paty. “We went inside Uranus’s magnetic field and suddenly it didn’t look like Earth or Jupiter or Saturn at all.” That brief snapshot isn’t much, but Paty’s model matches it perfectly.

“It’s great that it matches as well as it does with the one fly-by that we have of Uranus,” says George Hospodarsky at the University of Iowa. “But the real test would be sending an orbiter there and getting lots of data in different conditions and seeing if the model still matches.” NASA has plans in the works to send a new probe to Uranus in 2034, but no mission has been approved yet.

Paty hopes that as our tally of exoplanets grows, a greater understanding of Uranus will help us make inferences about those distant worlds, many of which are ice giants like Uranus and Neptune. Figuring out how their magnetic fields protect them (or not) from the stellar wind could be key to determining what their surfaces are like.

It may even lead to insights closer to home, by teaching us more about Earth’s relatively simple magnetic field.

“Looking at how Uranus’s complicated, strange magnetosphere works helps us understand how all the other systems work,” says Hospodarsky. “It’s sort of like doing an experiment one way and then turning it upside down and starting again. If it still works, your theories are good.”

Why is the magnetic axis of Uranus and Neptune off center? 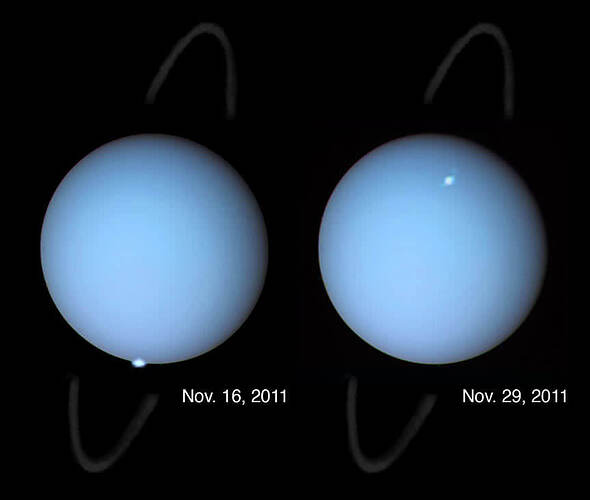 Folks , to add further complexity to this mystery , here is an article from the Smithsonian Institution itself , about Jupiter having TWO Magnetic South Poles !! Now , isn't that strange ?? Can any mainstream Planetary theory explain that :))

**I think this great anomaly on Jupiter alone , by itself , is enough to disprove the solid planet theory of an iron ball as the planetary core ! 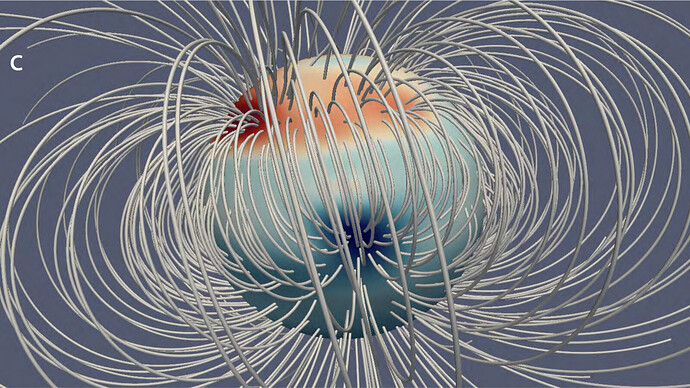 Researchers have known for awhile that Jupiter has a huge magnetic field that dwarfs our own. Most assumed that the field was similar to Earth's with magnetic force lines exiting one pole of the planet and re-entering at the other pole, creating north and south poles similar to a bar magnet.

The gas giant’s field is actually quite different, a new study published in the journal Nature shows. Chris Jones at Nature News & Comment reports that a recent analysis of data collected by the Juno space probe, which has been orbiting the planet since 2016, suggests the internal structure of the planet is more complicated than we thought, reports

Juno dives into Jupiter’s gravitational field every 53 days while using fluxgate magnetometers to map the magnetic field. Camille M. Carlisle at Sky & Telescope reports that investigators used data from eight of these flybys to construct a map of the planet’s field, revealing northern and southern poles that are radically different.

When mapping magnetic fields, researchers often color lines emerging from a planet red and lines where they re-enter blue. In the case of Earth, the red lines would emerge at the magnetic north pole, curl around the planet, re-enter and turn blue at the south pole. Charles Q. Choi at Popular Science explains that Jupiter’s field isn’t so clean.

There’s a band of red near the north pole where the force lines emerge, but there are two blue areas, one near the equator that researchers dubbed “The Great Blue Spot” where they re-enter as well as another blue area near the south pole, in essence giving it two south poles. A large part of the magnetic field also appears to be concentrated in the northern hemisphere instead of being evenly distributed between the poles.

“It’s a baffling puzzle,” Kimberly Moore, a planetary scientist at Harvard University and first author of the study tells Ryan F. Mandelbaum at Gizmodo. “Why is it so complicated in the northern hemisphere but so simple in the southern hemisphere?”

The freaky field probably has a lot to do with the mysterious interior of the gas giant, and gives researchers some new clues to figuring out what’s happening inside.

“We now have a close-up view of Jupiter's magnetic field, almost as good as our knowledge of the Earth’s field, which took hundreds of years to work out,” Chris Jones, a planetary scientist at the University of Leeds, who was not involved in the study, tells Choi. “This gives us a chance to work out what is really going on deep inside a planet other than the Earth.”

So far, science’s best theory as to how magnetic fields form is called the dynamo effect. The idea is that an electrically conductive fluid—in the case of Earth that’s liquid iron—passes over a weak magnetic field generating an electrical current. That current creates a stronger magnetic field, which also produces a current from fluid motion. Those magnetic fields are large enough to surround the planet.

The shape of Jupiter’s magnetic field could clarify how this process works within the big planet. Jones at Nature reports that there are a couple of ideas about what lies beneath Jupiter. One hypothesis is that its core is a solid, compact chunk with five times the mass of Earth. The other idea is that it has a more dilute core made up of several stable layers of electrically conductive fluid. The magnetic field suggests that the latter may be the case, or that a once solid core dissolved and mixed with the inner parts of the planet. In those layers, the composition of the fluid may be in flux, altering the way the fluid flows inside the core which in turn alters the magnetic field.

There are other factors that could explain the weird field as well. “Just like we have water rain on Earth, Jupiter may have helium rain inside the planet, and this could alter the magnetic field,” lead author Moore tells Choi. “Jupiter's winds might also reach down to depths where there's sufficient electrical conductivity to affect the field.”

Hopefully, as Juno continues swooping around the planet, more data will help us figure out Jupiter's strange magnetism .

Folks , Uranus in fact spins on an axis which is parallel to the plane of the ecliptic (probably tipped over onto it's side by a past impact) - no other planet has yet been found with such an incredible alignment !

Uranus also has a "Frankenstein moon" , to match it's own unusual nature :- 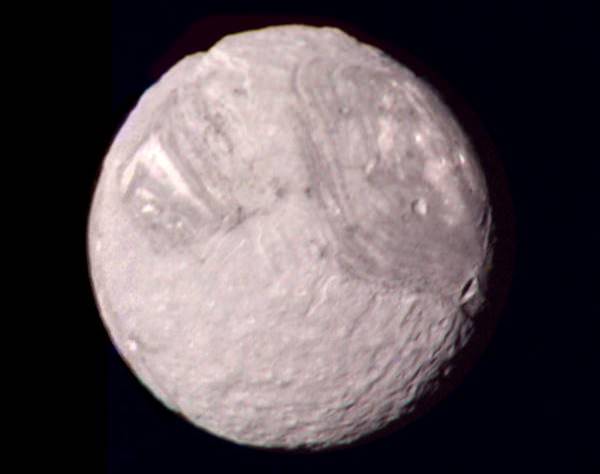