Welcome to Ukraine, home to the worlds largest KNOWN underground tunnel system... and the following specific 1,553 mile (2,500 km) system appears to be in Odessa alone(!!!). Before "the revolution" there were more than 1,000 entrances into the Odessa tunnel system - nearly all have been sealed off over the past 100 years. I find it intriguing that Odessa is straight across the Black Sea from Turkey and only about 580 miles (930 km) from such illustrious underground (cavern entrance) cities as Özkonak, Derinkuyu, and Kaymaklı in Cappadocia Turkey! 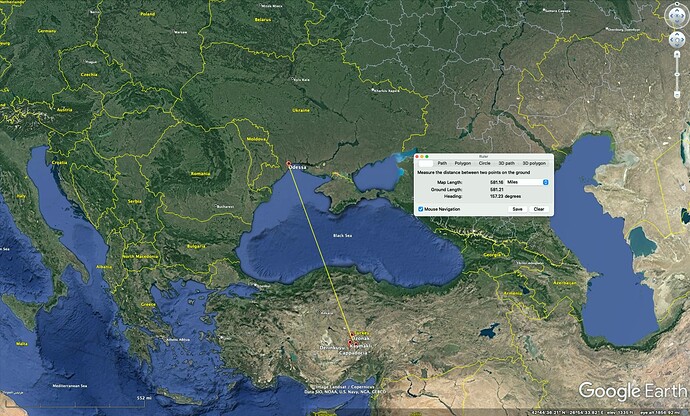 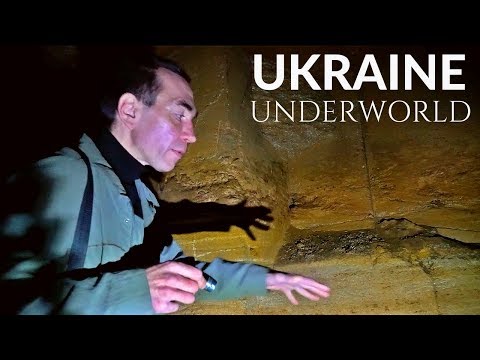 You will find some very interesting comments here. It appears that the longest expedition was just 25 miles (40 km) and it is "forbidden" to map it/them. 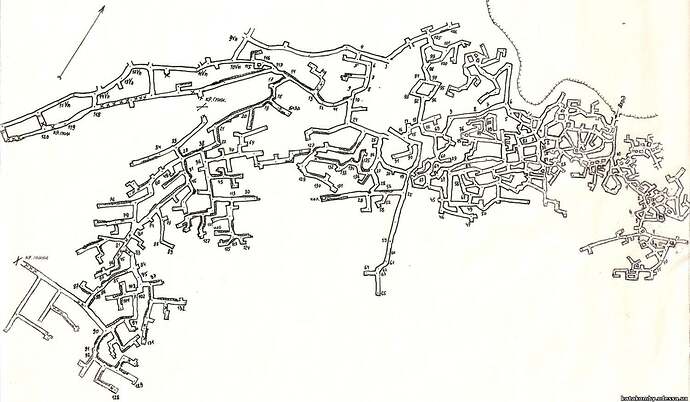 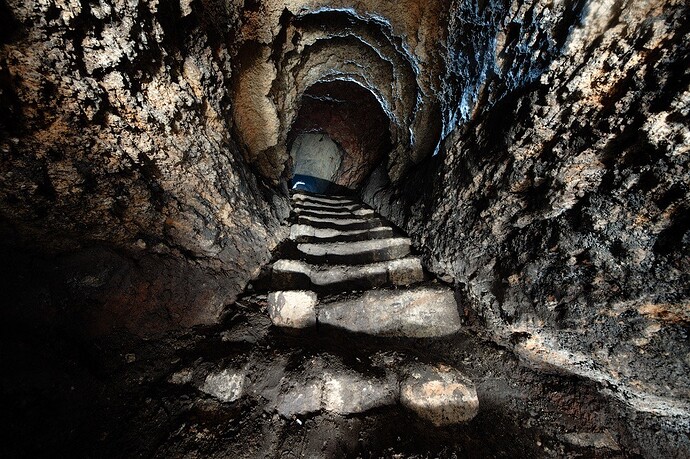 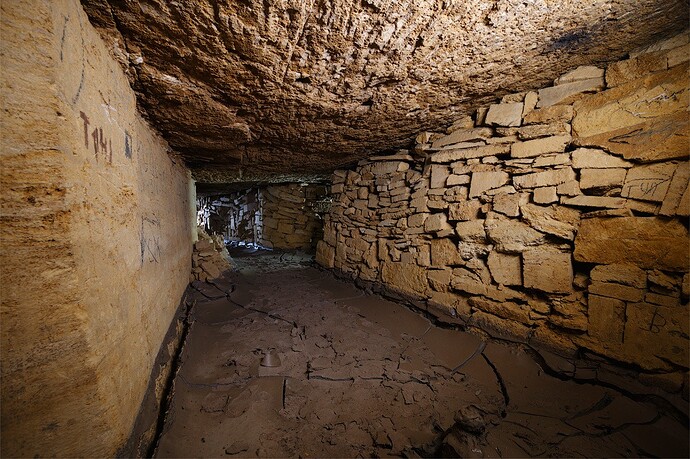 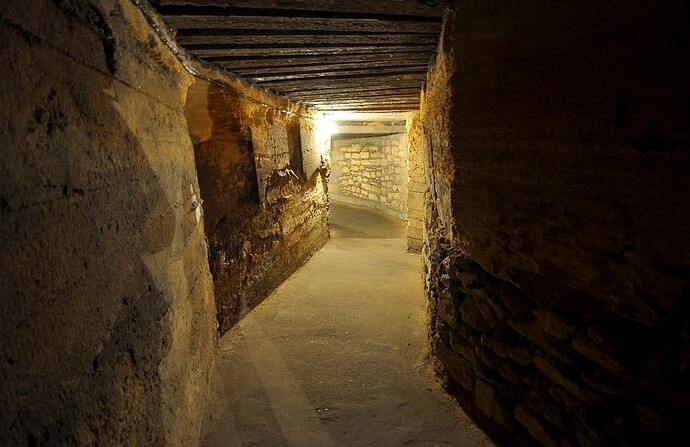 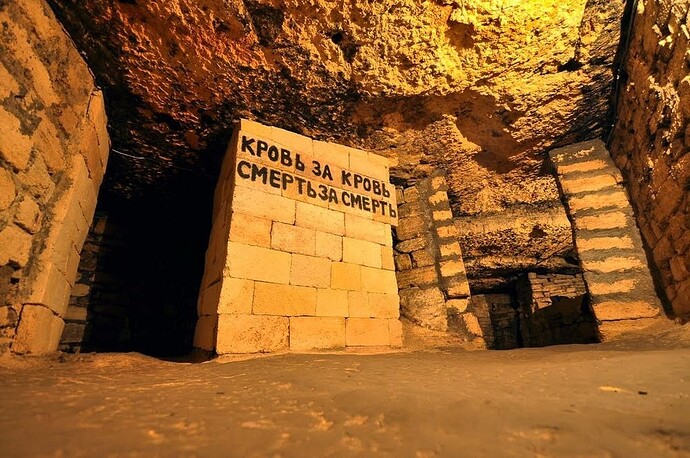 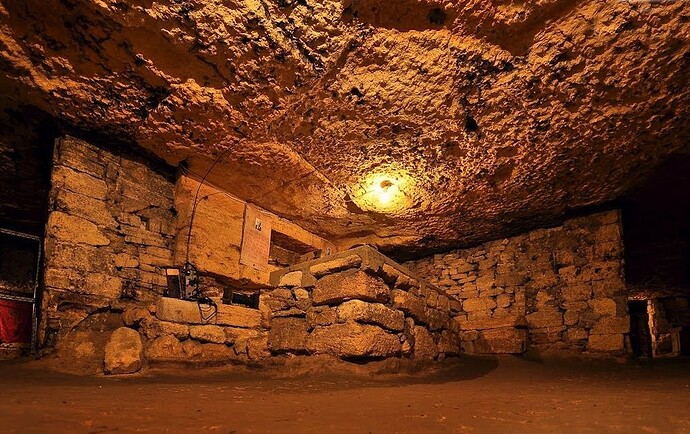 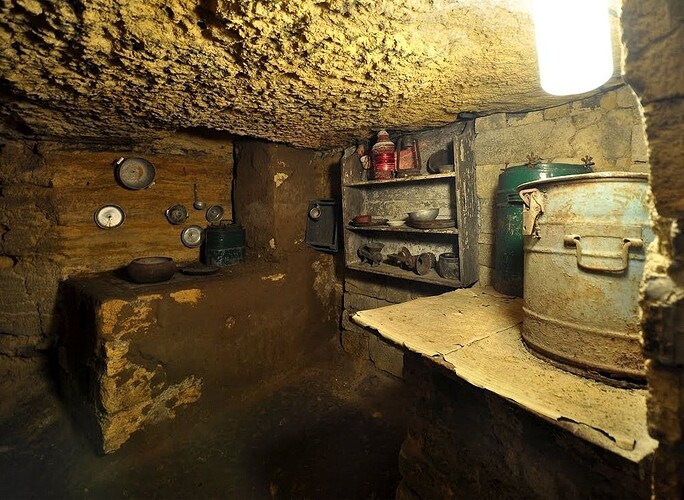 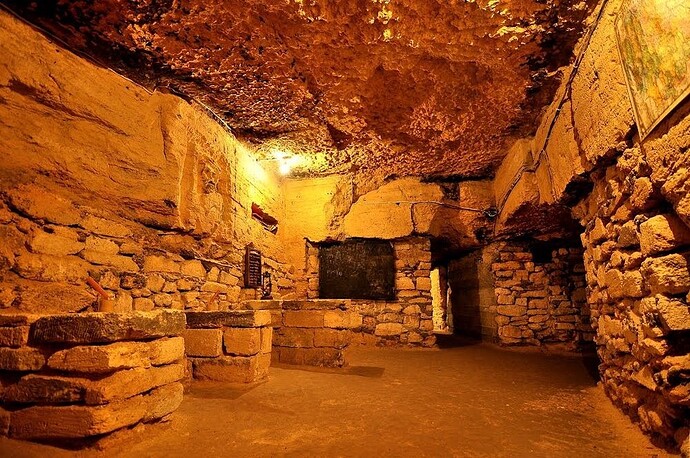 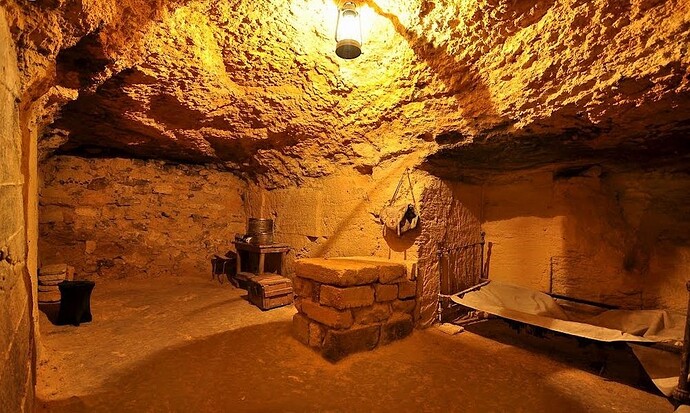 I wonder how deep the tunnels are. And how old are they?

There are other things that I'd like to say about this highly likely cavern world connection and the history (both recent and past)... but don't really want to talk about these topics here if you follow my drift. There's a lot to consider at this juncture.

Well, I don't want to spill any beans, but I read the comments to that page.

The Ukrainian women are very fertile, pregnancy rates high, but infant mortality rates are so high that the population has been falling for a long time. Apparently, women are informed that their baby died, and she doesn't even get to see the body.

Abduction for and to subterranean worlds, I would say!

And the Russian "invasion" is just another example of cleaning out underground DUMBs, this time by the Russians, and not by the Marines as in the case of 29 Palms.

Truly amazing and fully suspect... The biolabs and so many things with the cavern world tie right in seamlessly.

Well you're going to find this segment fascinating, especially at about 8 minutes into it. Notice the location of the remarkable biolab around this timestamp (hint: ODESSA):
(YouTube Link) 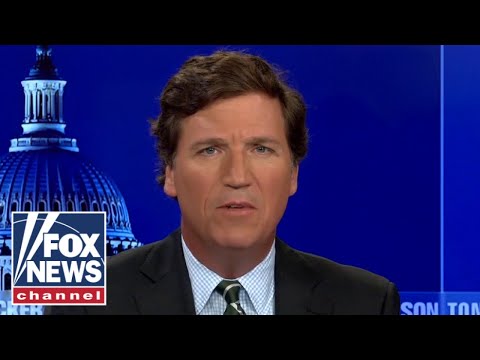 @Soretna , also you may have heard of the mysterious "Odessa Files" from WW II...!

Hmm, news to me @sidharthabahadur - sounds like a "fiction" novel?

Sometimes truth is presented as fiction.

It's funny ... this warfare in The Ukraine has just had me whacked out of shape. I've been so stunned that I just haven't had my normal hollow earth mindset, and I have neglected the list a bit.

And then this thread comes along and combines the two, underground tunnel systems and The War in the Ukraine.

Just what I needed!

@Soretna , @deandddd , the movie "Odessa Files" is of course a fictionalised account based on a true story...during WW II , the war had even reached as far as the Black Sea region , where Odessa lies...

Wanted to make a brief observation here... this video talks about the genocide of ethnic Russians being planned: 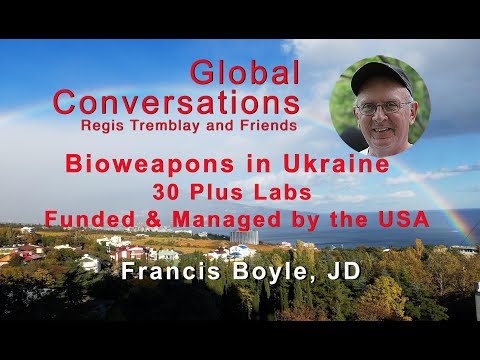 (I don't agree with his terminology of "Nazis"... actually the people perpetrating this crime are communists and Ukraine is a historically communist country...)

I find it fascinating that the New World Order has an obsessive hatred for the Russian people. We've seen statements from George Soros, Alexander Soros, Marina Abramovich and many other high-profile elites proclaiming their open war and hatred on Russia.

Just why does the New World Order hate the Russian country so badly? A dive into history might give us some clues...

The following is an assembly of quotes regarding the New World Order's deep-seated hatred for Russia:

Of recent years the Rothschilds have consistently refused to have anything to do with loans to Russia owing to the anti-Jewish legislation of that empire. ([1905]: The Jewish Encyclopedia, vol. 10, p. 497)

Oddly enough, the Bolshevik Revolution was greeted with enthusiastic approval of many of the world's leading financiers. One of the most prominent of their number, Jacob Schiff, senior partner of Kuhn, Loeb Co., New York, telegraphed his greetings, as recounted in the New York Times, March 19, 1917: "A persistent foe of the tyrannical autocracy [i.e., referring to the Russian Empire], the merciless persecutors of my co-religionists, may I congratulate through you the Russian people upon what they have now so wonderfully achieved and wish you and your colleagues in the new government every success." The Minister, Milioukoff, a longtime friend of Schiff, replied, "We are united in hatred and antipathy to ancient regimes now overthrown." Here again is a direct quote from the Will of Canaan "hate your masters." (The Curse of Canaan by Eustace Mullins, p. 214)

(note: these same international bankers were the ones who funded the Bolshevik Revolution, whilst lauding the downfall of the Russian Empire)

Two Greek monks travelled to Russia and set up the Cyrillic alphabet, named after one of them. In 908 A.D., the Slavs asked the Germans to come in and rule them, for they stated that they were incapable of ruling themselves. The Germans founded an aristocracy, known as White Russians, who administered the country for one thousand years, until [the Bolshevik takeover in] 1917. The Slavic peasants had never made any trouble, but in less than a century, the [Bolsheviks] achieved their revolution. As Baron states, page 332, Great Ages and Ideas of the Jewish People, 'The realization increasingly dawned upon the growing Jewish intelligentsia that the Jewish question could not be solved without the total overthrow of Russia's established order.' [...] Trotsky, as Lev Bronstein liked to call himself, and Lenin led a Bolshevik seizure of power in October of that year. Copying the example of the French Revolution, Trotsky initiated a Reign of Terror. During the next three years, he murdered 88% of the White Russians. [...] Thousands of brutal [communists] seized White Russians, including priests and nuns, and tortured them in an unspeakable manner before delivering them to the firing squads. Between 1917 and 1940, the [Bolsheviks] murdered twenty million Christians in Russia. [...] The Russian ruling class, the White Russians of German descent, were wiped out, with the exception of a few who escaped to the West. It was the French Revolution over again. The [Bolsheviks] forced the populations of entire towns to march through inspection lines. If the men had no callouses on their hands, they were not workingmen, and they were shot. If the women spoke good grammar, they were shot. In this manner, the gentile intelligentsia was exterminated, leaving a horde of illiterate peasants ruled by a minority of [Bolshevik] bandits and assassins. (New History of the Jews by Eustace Mullins, pp. 103-106)

(note: we thus see that a large part of the purpose of the Bolshevik Revolution was to implement an ethnic cleansing)

You must understand. The leading Bolsheviks who took over Russia were not Russians. They hated Russians. They hated Christians. Driven by ethnic hatred they tortured and slaughtered millions of Russians without a shred of human remorse. The October Revolution was not what you call in America the 'Russian Revolution.' It was an invasion and conquest over the Russian people. More of my countrymen suffered horrific crimes at their bloodstained hands than any people or nation ever suffered in the entirety of human history. It cannot be overstated. Bolshevism committed the greatest human slaughter of all time. The fact that most of the world is ignorant and uncaring about this enormous crime is proof that the global media is in the hands of the perpetrators.

So, we can now see that the whole Bolshevik Revolution itself was an act of hatred and attempted genocide against the Russian people. The current hatred of the New World Order cabal, which is directed squarely towards Russia, is another manifestation of an ancient enmity that has existed for many centuries now. I don't think they can help it—it seems to be something deeply-rooted in their psyche at this point.

I also think it's clear to see the cavern-world influence in this hatred, as Russia is one of the nearest countries to the north-polar opening, therefore indicating that the Russia-hatred is essentially a projection of the cavern-world hatred towards the inner-earth / concave-world civilization.

So the Ukrainian hatred against Russia seems to be fed by underground cavern worlds below The Ukraine. Probably the tunnel systems below Odessa is how the underground cavern worlders gain expression on the surface. Remember that all scriptures in the world connect demoniac civilizations to worlds below the surface. And that Russia is so close to the orifice to the hollow earth. So the current struggle between the Ukrainian army and the Russian army is a struggle between demons that want to dominate the surface, and the hollow earthers, who object.

It can be hard to connect exact underground communities with activities on the surface. But modern Russia seems to be morally and spiritually oriented, and the hollow world seems to be pious by all accounts, too; from the Vedic descriptions to Olaf Jansen's testimony. So, let's put two and two together.

At the same time, Europe and America talk about things like bombing The Moon; and subjugating all the cultures on the surface of the Earth into one culture, one religion, one language, one race; and sexual mutilation of the body that God gave us.

So who is the Good Guy in Ukraine versus Russia? If you get the right answer, you get a two week, all-expenses-paid vacation to Hawaii, a brand new Ford Mustang, and a Maytag washer-dryer combo for free!

@deandddd Also, I forgot to delineate in my above post another significant point of connection with the underworld. It is a documented fact that leading Bolsheviks during the Revolution were funded with American money via Swiss and German banks (affiliated with bankers in New York, such as Max Warburg). Here are some documents which provide evidence for such funding. These documents were obtained by agents working for the Ambassador in Russia to the Secretary of State, obtained directly from the files of the "Kontrerazvedka," a secret Government service organized under Alexander Kerensky: 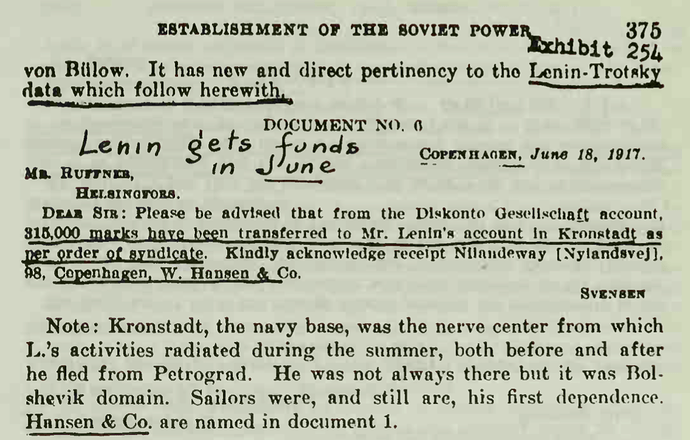 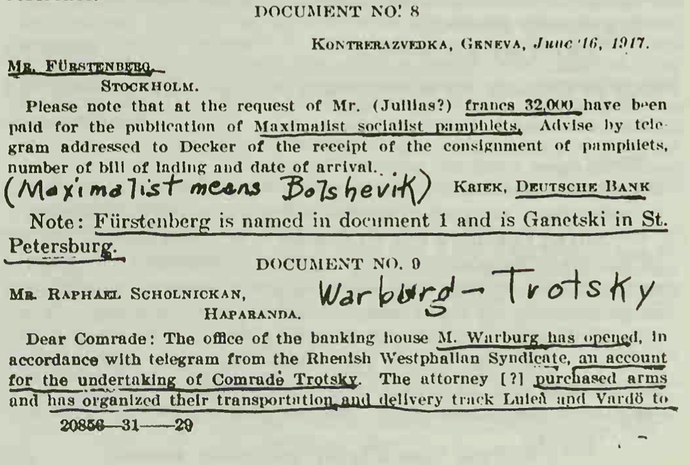 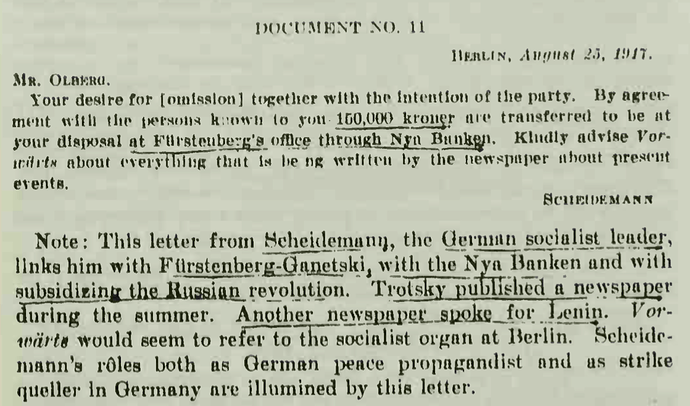 I always wondered how exactly the bankers agents' smuggled that much gold or cash from Switzerland or Germany all the way to Sweden and Russia in some cases. But the discovery of these massive underground tunnels, provides an extremely plausible, compelling (and not to mention safe) mode of transport... food for thought!

If someone were to go deep enough, the person might even encounter one of those underground, high speed trains. Such trains would truly facilitate the movement of gold.

Folks , some very unusual things are beginning to emerge about Ukraine , that were not so much in the public eye , prior to this war . I had once heard in one of my foreign travels about how Ukrainian women are famous for their beauty , across the world - for a nation which is otherwise called the "poorest country in Europe"...but did not realise , this is what it actually might have implied :- 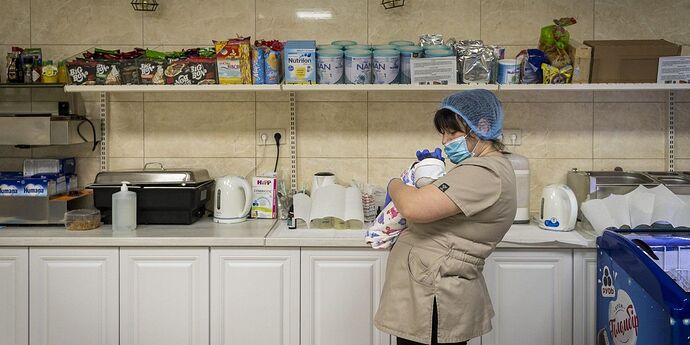 Ukraine Is a World Leader in Surrogacy, but Babies Are Now Stranded in a War...

In the basement beneath one apartment block in Kyiv, 19 newborns lie in plastic cots, their cries mingling with the blare of air raid sirens warning of incoming Russian strikes. 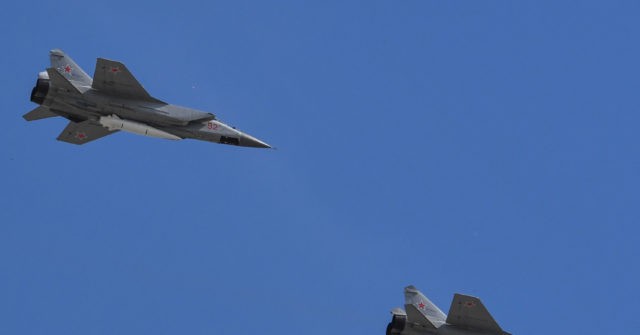 Russias military said it hit the underground warehouse in Delyatyn with the hypersonic Kinzhal missile in its first reported combat use.