The Krisna Avatar and Cavern Worlds

There is a chapter in the tenth canto of the Bhagavat Purana which details the activities of the Krishna Avatar in relation to the Shyamantaka Jewel. This narration confirms the existence of cavern worlds below.

Shri Krishna went out into the forest looking for the Shyamantaka Jewel because it had been robbed. He came to know that the jewel had been taken down a tunnel by a great Monkey King, Jambhavan. This supposed monkey seems to be more akin to the Almas of the Hindu Kush and, in fact, the place where all this occurred was not too far (relatively speaking) from the Hindu Kush, maybe within a couple of hundred miles from present-day Bombay.

Anyway, the narration mentions that Shri Krishna entered a tunnel leading to a subterranean world where the simian had a home which had a nursury for his child, toys and a nanny to look after him. The narration also states that Krishna was confronted by the simian king and had to engage in fighting with him, and that they jousted against each other using trees as some kind of karate-stick weapon. So the existence of subterranean forests is alluded to at the same time.

"Krsna and the citizens of Dvaraka then found in the forest a great tunnel, said to be the path to Rksa's house. Krsna knew that the inhabitants of Dvaraka would be afraid to enter the tunnel; therefore He asked them to remain outside, and He Himself entered the dark tunnel alone to find Rksa, Jambavan. After entering the tunnel, Krsna saw that the very valuable jewel known as Syamantaka had been given to the son of Rksa as a toy, and in order to take the jewel from the child, He went there and stood before him. When the nurse who was taking care of Rksa's child saw Krsna standing before her, she was afraid, thinking the valuable Syamantaka jewel might be taken away by Him. She began to cry loudly out of fear."

"There was then a great fight between Krsna and Jambavan in which they fought like two opposing vultures. Whenever there is an eatable corpse the vultures fight heartily over the prey. Krsna and Jambavan first of all began fighting with weapons, then with stones, then with big trees, then hand to hand, until at last they were hitting one another with their fists, and the blows were like the striking of thunderbolts."

The following comments confirms that Krishna had remained underground the whole time, i.e., that they didn't come to the surface to duel and use trees from the surface: "Although the fighting between Krsna and Jambavan went on for twenty-eight days, the inhabitants of Dvaraka waited outside the tunnel for twelve days, and after that they decided that something undesirable must have happened. They could not understand what had actually happened for certain, and being very sorry and tired, they had returned to the city of Dvaraka."

The whole story may be found here: http://krsnabook.com/ch56.html

@deandddd , you may find this very interesting - the ancient Syamantaka gem from the Mahabharat era over 5,000 years ago , is none other than the world (in)famous Koh-i-noor diamond that the British took away from India and display in their Tower of London . Throughout history , great deal of bloodshed has been caused , in an attempt to possess it . Many have claimed this jewel is accursed , which is why nobody wears it on their person...

The current name of this jewel - Kohinoor , was given by Persian invaders . It continues to be a source of diplomatic tussle (for return to India) , as you can imagine :-

Tales of the World's Most Magnificent and Important Jewelry

Did the Syamantaka Mani Become the Koh-i-Noor Diamond? 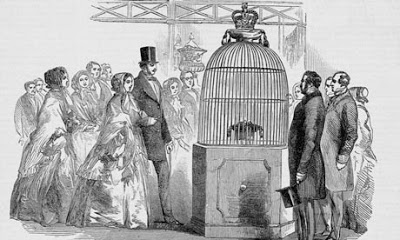 The Koh-i-Noor Diamond on View at the Great Exhibition
Photo Credit: Number One London

On an expedition to India in order to find “those markets on the border and travel and east with the diamond men, picking up stories and characters,” author Kevin Rushby heard remarkable accounts of the Koh-i-Noor, which today resides in the Tower of London.

He began his quest in Africa, where his friend Cedric warned him that diamonds don’t give up their secrets. Even after he lost the trail in Africa, Rushby did not give up the hunt for the tale of a diamond. He found himself in India, talking to a man who seems to have been an astrologer of sorts.

This mystic told Rushby, “The first diamond was the Syamantaka which the Sun god, Surya, gave to Sattrajit as reward for worshiping him. When this magical gem disappeared, the people accused our god Krishna of stealing it and he fought terrible battles to return it to man.”

He also met Mr. Shantilal Bhatt, who responded to his inquiry by remarking, “Then you should know of the Syamantaka of the Sun god…It is the first diamond in Indian legend, the greatest stone in our history….in Dwarka lived a man called Sattrajit who worshipped Surya, the sun.

One day, while he was walking on the shore, Surya appeared before him and rewarded his devotion with a jewel—the Syamantaka. This jewel brought great prosperity to the city and kept away all evil things like famine and wild animals and robbers.”

Rushby's account makes it seem like these men not only believed firmly that the Syamantaka mani and the Koh-i-Nur are one in the same, but that Rushby’s quest to discover the diamond led him to the same conclusion. Of course, they could be wrong…

The Bhagavatam states that the jewel used to produce nine mounds of gold per day, and the Krishna Avatar told Akrura: "This jewel is so powerful that no ordinary man is able to keep it".

Perhaps it doesn't function because it is Kaliyuga, and the cloud mantle has fallen, and we are exposed to the unrefined rays of The Sun. Surely, the electromagnetic condition of our atmosphere is different than it was back then.

@deandddd , during the long and chequered history of this diamond , it was broken up into two (or more pieces) - one of them being kept at the Tower of London...no one knows where the other piece(s) are.

So , to begin with , this diamond was auspicious and also the largest one ever , in the hands of man - but over time , it has acquired quite a reputation for intrigue . It is actually a "blood" diamond in a different sense...