“The Invisible Universe” –A Primordial ‘Magnetic Soul’ Pervades the Cosmos

List members , mainstream astronomy is having to accept just how pervasive "Primordial Magnetism" is in our Universe . This is a HUGE win for and a powerful validation of the Electromagnetic Universe concept :- 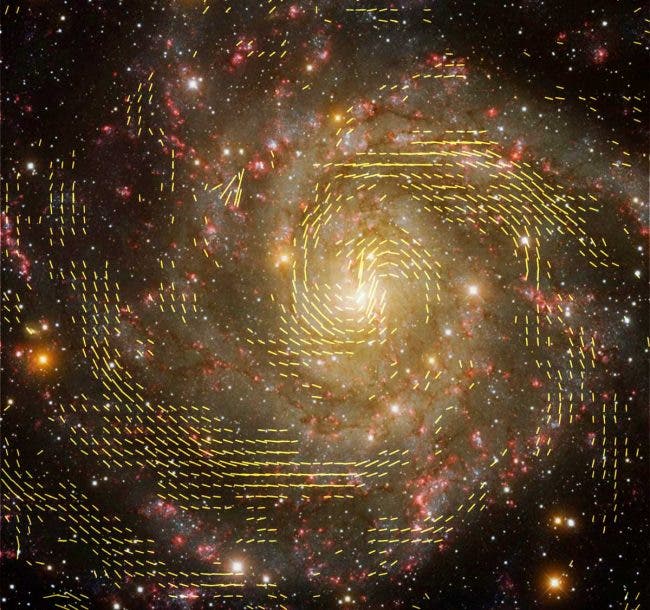 "The Invisible Universe" --A Primordial 'Magnetic Soul' Pervades the...

The world’s astronomers are increasingly probing the mystery of where the enormous magnetic fields that permeate our universe come from –from Earth to Mars to the Milky Way to intergalactic voids and beyond to the darkest, most remote...

“The Invisible Universe” –A Primordial ‘Magnetic Soul’ Pervades the Cosmos

The world’s astronomers are increasingly probing the mystery of where the enormous magnetic fields that permeate our universe come from –from Earth to Mars to the Milky Way to intergalactic voids and beyond to the darkest, most remote regions of the cosmos.

The Death of Mars

A half a billion years ago, Mars magnetic field that protected an ocean as deep as the Mediterranean Sea was switched off. An impact basin deep enough to swallow Mount Everest in Valles Marineris reveals what might be the results of ancient asteroid the size of Pluto colliding with the Red Planet switching off its magnetic field, bathing the Red Planet in harmful radiation, and eroding its atmosphere by particles streaming from solar winds. Today, Mars is a frigid desert world with a carbon dioxide atmosphere 100 times thinner than Earth’s.

A strong magnetic field had probably played an important role in protecting the atmosphere from the solar wind and keeping the planet wet and habitable. “Venus and Mars have negligible magnetic fields and do not support life, while Earth’s magnetic field is relatively strong and does,” said Sarah McIntyre at Australia National University. “We find most detected exoplanets have very weak magnetic fields, so this is an important factor when searching for potentially habitable planets.” 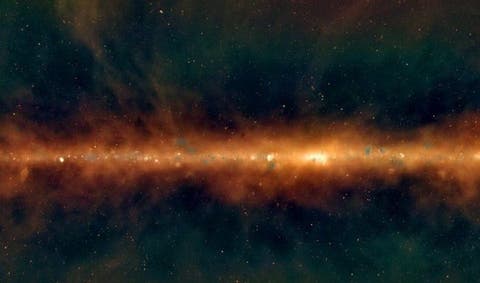 An iconic new image of the Milky Way’s violent center (above) from the Murchison Widefield Array, a radio telescope in the Western Australian outback, shows huge golden filaments that indicate enormous magnetic fields –what our galaxy would look like if human eyes could see radio waves.

Anytime astronomers figure out a new way of looking for magnetic fields in ever more remote regions of the cosmos, inexplicably, they find them, observes Natalie Wolchover in Quanta about the invisible magnetic field lines that loop and swirl through intergalactic space like the grooves of a fingerprint, an unseen “magnetic soul”.

“Magnetism is primordial,’ she writes, “tracing all the way back to the birth of the universe. In that case, weak magnetism should exist everywhere, even in the “voids” of the cosmic web — the very darkest, emptiest regions of the universe. The omnipresent magnetism would have seeded the stronger fields that blossomed in galaxies and clusters.”

In 2019, astronomers discovered 10 million light-years of magnetized space spanning the entire length of a “filament” of the cosmic web, part of the massive web that fills much of space, connecting two galaxy clusters dubbed Abell 0399 and Abell 0401 that are slowly colliding with each other.

“We are just looking at the tip of the iceberg, probably,” said Federica Govoni of the National Institute for Astrophysics in Cagliari, Italy, who led the first detection using the Low-Frequency Array (LOFAR) radio telescope to observe the bridge of radio-emitting plasma extending between the two galaxy clusters that are approaching a merger. The results imply that intergalactic magnetic fields connect the two clusters and challenge theories of particle acceleration in the intergalactic medium. 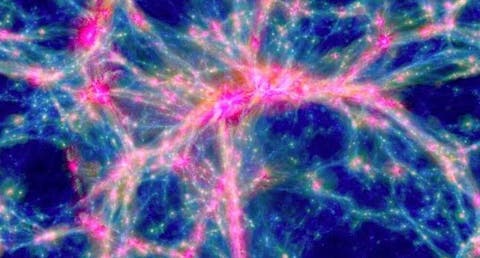 The cosmic web, shown here in a computer simulation, of massive filaments of galaxies separated by giant voids.

Primordial magnetism might also help resolve another cosmological conundrum known as the Hubble tension, observes Wolchover, pointing out that it is “probably the hottest topic in cosmology.”