I have been looking at an article in Atlantis Rising Atlantis Rising, 2017, named something like “The Discovery of Tartessos in Three More Maps in Byzantine Greek from the Cartographic Tradition of Marino de Tiro”. I found it in Spanish. The site even has an English home page, but the articles are in Spanish.

(You all really should learn Spanish. One day you might have to talk to God. … Actually, that won’t be a problem for most of you in the first place)

But there are maps which had recently come to light a bit before 2017. They are Byzantine Greek maps, attributed to/copies of maps by Ptolemy, who attributed them to the Phoenician cartographer Marino de Tiro. Take a gander. 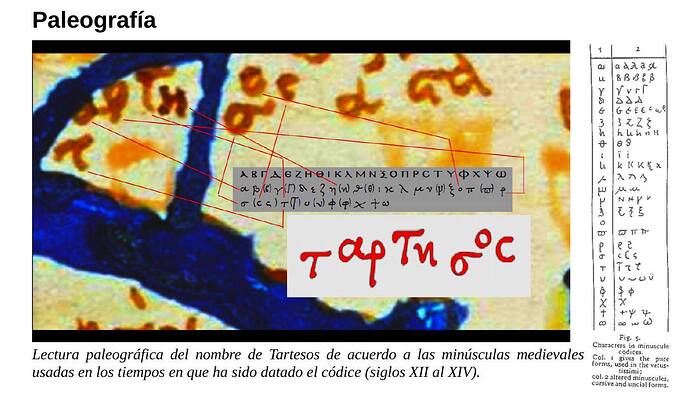 The problem is that the Iberian coastline is different from the coastline today. Tartessos is depicted in the top map in the yellow square, on an island in at the mouth of the presently named Guadalquiver river. And that is where present-day Seville is located, which is where Taressos is supposed to have been located. But Seville is not presently located at the mouth of that river, it is way up from the ocean, not at the mouth where it empties into the Atlantic Ocean. But the location of Seville in relation to the town of Cordoba and to Gibraltar are the same in both the ancient maps and the present-day maps, so I assume that the continents have risen a bit. I mean, it seems that the Sahara was the sea floor of the Triton Sea at one point, but now it is above sea level.

Tartessos was mentioned by Plato as an Atlantean city or town, and there are other correspondences which I won’t go into. But I will say that the article tells that Seville/Tartessos and Cordoba were marked on the map as Phoenician cities.

The Amazon tribes of female warriors had a close relationship with the Phoenicians. Although they had been known to live in Central Asia, Lydia in Turkey, Cappadocia in Turkey, up in Armenia and in the Greek island called Lesbos, and they made a total migration to Carthage and met up with the Amazons that inhabited the Atlas Mountain region. And then nobody knew where they went.

And the Amazons in Brazil, the Orinoco and the Caribbean followed the same traditions as the Amazons mentioned above. And the Phoenicians knew about The Americas because at the Mines of Muribeca, there was Phoenician script found chiseled in stone and also a Darius gold coin from Persia. So I theorize that the Amazons went to South America with the Phoenicians, to make a long story short, and that they are living underground.

Now, in the book Secret Cities of Old South America by Harold T. Wilkins, there is a good bit of material about the Amazons and their underground existence. We can consider the following from Page 152:
"Peter Martyr of Angleria, who ran a school for nobles at the court of Queen Isabella of Spain, wrote into his De Novo Orbo of contemporary stories of the discoveries made by Columbus in the Caribbean. On his first voyage, some of the natives were sent prisoner to old Spain and they and others, later set free, affirmed that the Ilse of Martinique was inhabited only by women."
From Peter's book: "It seems that the cannibals went, at certain times of the year, to visit these women, exactly as the Thracians passed to the Isle of Lesbos, where dwelt the Amazons. When the children of this union were weaned, they would send the boys back to the fathers, but keep the girls. It is claimed that the women know of great, great, great subterraneans (caverns, vaults or tunnels) where they hide themselves; so that if men try to visit them before the agreed time or they they attempt to use force to enter these tunnels or adopt trickery or ruses. The women defend themselves with arrows, and they know how to shoot them with skill. That is at least what they have said, and I repeat it to you."

And white Caucasians were spotted by the Portuguese explorers who found the Mines of Muribeca, but they ran off in canoes. So, just to sum it all up, the Phoenicians made it to South America, certainly after the Punic wars, and the Amazons made it there, too. And both the Phoenicians and the Amazons had prior knowledge of underground worlds. And the Indians of Guadalupe told Columbus of their existence in a cavernous world below Guadalupe Island. What more do we need to know in order to put two and two together?

The Phoenicians and the Amazons still exist in underground worlds.

The Phoenicians were simply Atlanteans because they are from the Mediterranean shores, and Plato tells us that the Atlanteans migrated along the Mediterranean over to the border with Egypt, and along the northern shores to what is present day eastern Turkey. Given that Atlantis went under 12,000 years ago, I imagine that they could have made it to France and the British Isles. Arthur of Avalon in Wales re-established trade with northern Africa which is where the Phoenicians are from. Why would he do that, of all things? Well, the Celtics had extended all the way to southern Iberia, so he was re-establishing relations with his own people, so to speak.

And Arthur was a giant that kept coming out of his cave below Avalon, over the long run of 200 years, and we keep hearing that underground people live for as much as 900 years and that they are giants. (I won’t digress into this, either) And right in the heart of the Atlantean empire, the Arabs tell of underground worlds below the Aggar Mountains in Algiers, and below the Atlas Mountains just above the Richart Structure in Mauritania, which really, really seems to be the site of Atlantis; it coincides with Plato’s measurements and descriptions.

So I’ll expand things a bit and say that the Atlanteans, the Phoenicians, the Celts and even the Etruscans were all from Atlantean lineage and that they still survive in underground worlds below the Sahara, below Wales, below Lexington in Kentucky and below the Mines of Muribeca.

I say this about the Caucasians sighted at Muribeca because they had to have come from some community, they had to have come from somewhere close by – they weren’t just wandering around the continent of South America on a lark – and the Phoenicians were white Caucasians who had had a town right below the cliffs of those mines, so who else could they be? And why would they stay on the surface if they knew about underground worlds and the benefits in terms of longevity and such?

Well, I have been rambling a bit. And you may or may not follow, but there is logic to what I say.

My question is, what is the role of the descendants of Atlantis in the modern-day power struggles? Because the underground manipulation of the surface world (Michael Mott’s term), is the name of the game. And apparently, we hardly know who the players are.