Subsurface oceans on other worlds, just like the Earth's "Abzu", Jules Verne too was right !

List members , the stories of an ocean hidden inside the Earth have been around since the ancient Sumer civilisation that called it "Abzu" . In more recent times , Jules Verne described an ocean inside the Earth in his fictional novel "Journey to the center of the Earth" .

But as they say "fact is stranger than fiction" , so science is now acknowledging that not just Earth , but many other rocky worlds or planetoids (like Earth , Venus and Mars) and moons have sub-surface oceans . This similarity of planetoids and moons is actually proof that the worlds like Mercury , Venus Earth and Mars are themselves former moons of the gas giants (true planets) - just that the Sun's pull/attraction managed to break them free from their host planets and drift them into independent orbits around itself .

Mainstream science has now actually derived a formula for predicting these subsurface oceans on such worlds . However , I will request you to ignore their warped idea of a solid interior for these worlds :)) So , please just focus on this aspect of their sub surface oceans - at least they got that part right :- 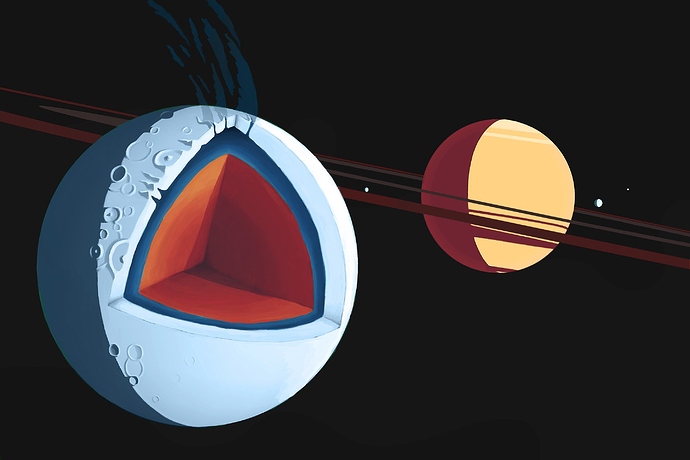 So far, the search for extraterrestrial life has focused on planets at a distance from their star where liquid water is possible on the surface. But within our Solar System, most of the liquid water seems to be outside this zone. Moons around cold...

So far, the search for extraterrestrial life has focused on planets at a distance from their star where liquid water is possible on the surface. But within our Solar System, most of the liquid water seems to be outside this zone. Moons around cold gas giants are heated beyond the melting point by tidal forces. The search area in other planetary systems therefore increases if we also consider moons. Researchers from SRON and RUG have now found a formula to calculate the presence and depth of subsurface oceans in these 'exomoons."

In the search for extraterrestrial life, we have so far mainly looked at Earth-like planets at a distance from their parent star where the temperature is between the freezing and boiling point of water. But if we use our own Solar System as an example, moons look more promising than planets. Enceladus, Europa and about six other moons of Jupiter, Saturn, Uranus and Neptune may harbor a subsurface ocean. They all reside far outside the traditional habitable zone—it is literally freezing cold on the surface—but tidal interaction with their host planet heats up their interior.

With moons entering the equation, exoplanet hunters such as the future PLATO telescope—which SRON is also working on—gain hunting ground regarding the search for life. When astronomers find a so-called exomoon, the main question is whether liquid water is possible. Researchers from SRON Netherlands Institute for Space Research and the University of Groningen (RUG) have now derived a formula telling us whether there is a subsurface ocean present and how deep it is.

"According to the most common definition, our Solar System has two planets with a habitable surface: Earth and Mars," says lead author Jesper Tjoa. "By a similar definition there are about eight moons with potentially habitable conditions below their surface. If you extend that to other planetary systems, there could be four times as many habitable exomoons as exoplanets." With this in mind, Tjoa and his supervisors Floris van der Tak (SRON/RUG) and Migo Mueller (SRON/RUG/Leiden Observatory) derived a formula that provides a lower limit for the ocean depth. Among the factors involved are the diameter of the moon, the distance to the planet, the thickness of the gravel layer on the surface and the thermal conductivity of the ice or soil layer below. The first two are measurable, the other two have to be estimated based on our Solar System.

Although underground life is more difficult to find than life on the surface, it will be possible to obtain a hint in the near future. Tjoa: "Observational astronomers study starlight shining through the atmospheres of exoplanets. They can for example identify oxygen. When they point future telescopes at exomoons, they may see geysers like on Enceladus, stemming from a subsurface ocean. In principle you could recognize signs of life that way."