Folks , as if the world's deepest lake - Lake Baikal , wasn't highly mysterious by itself , it now hosts a giant space Telescope - that too deep UNDERWATER !! 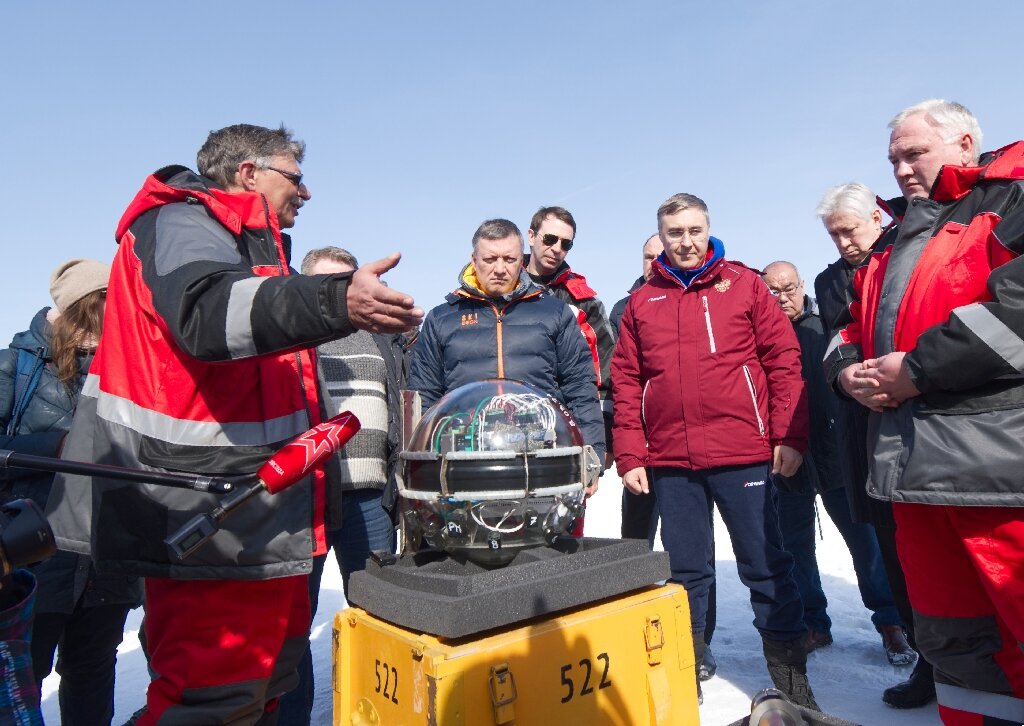 Russian scientists on Saturday launched one of the world's biggest underwater space telescopes to peer deep into the universe from the pristine waters of Lake Baikal.

The underwater neutrino telescope was lowered to a depth of 750-1,300 meters in Lake Baikal

Russian scientists on Saturday launched one of the world's biggest underwater space telescopes to peer deep into the universe from the pristine waters of Lake Baikal.

The deep underwater telescope, which has been under construction since 2015, is designed to observe neutrinos, the smallest particles currently known.

Neutrinos are very hard to detect and water is an effective medium for doing so.

The floating observatory consists of strings with spherical glass and stainless steel modules attached to them.

On Saturday, scientists observed the modules being carefully lowered into the freezing waters through a rectangular hole in the ice.

"A neutrino telescope measuring half a cubic kilometre is situated right under our feet," Dmitry Naumov of the Joint Institute for Nuclear Research told AFP while standing on the lake's frozen surface.

In several years the telescope will be expanded to measure one cubic kilometre, Naumov said.

The Baikal telescope will rival Ice Cube, a giant neutrino observatory buried under the Antarctic ice at a US research station at the South Pole, he added.

Russian scientists say the telescope is the largest neutrino detector in the Northern Hemisphere and Lake Baikal—the largest freshwater lake in the world—is ideal for housing the floating observatory.

"Of course, Lake Baikal is the only lake where you can deploy a neutrino telescope because of its depth," Bair Shoibonov of the Joint Institute for Nuclear Research told AFP.

"Fresh water is also important, water clarity too. And the fact that there is ice cover for two-two and a half months is also very important."

The telescope is the result of a collaboration between scientists from the Czech Republic, Germany, Poland, Russia and Slovakia.

Folks , here's the latest on this exciting story - stay tuned :)) 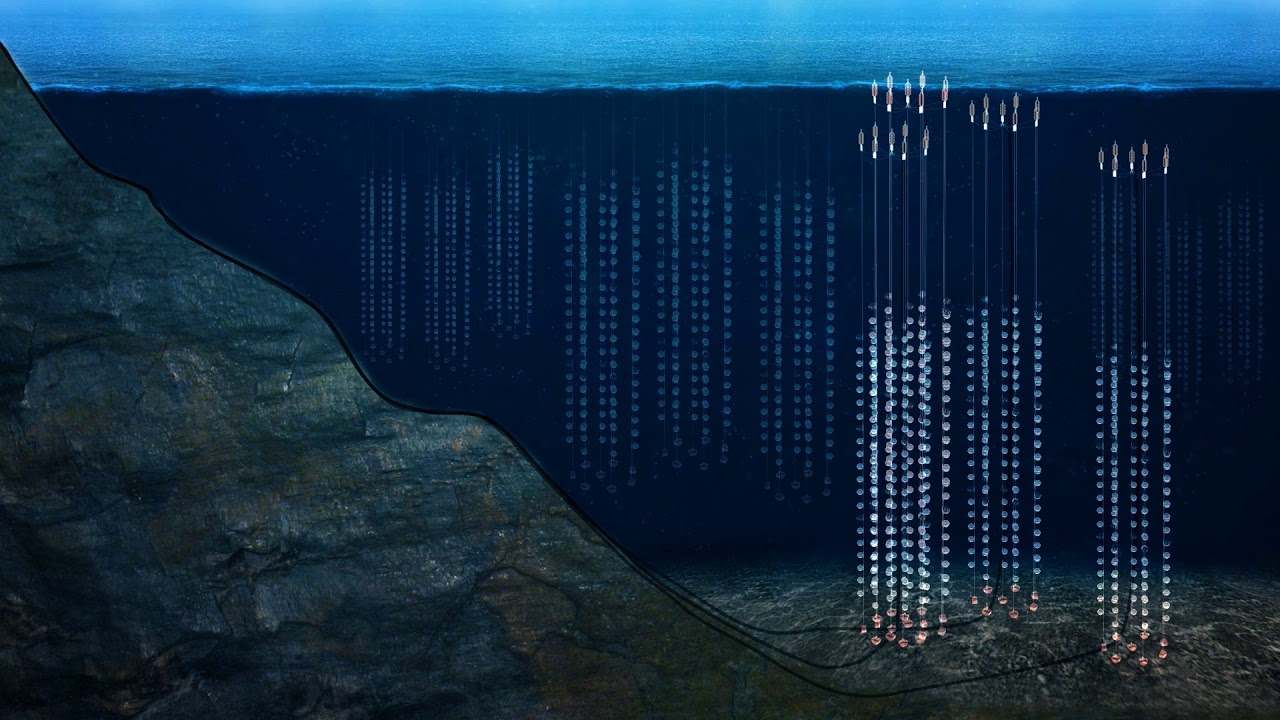 Under the world's deepest lake, Baikal telescope being assembled to hunt...

The Lake Baikal telescope in Siberia is one of many efforts to hunt for neutrinos in the world’s most remote places.

Under the world's deepest lake, Baikal telescope being assembled to hunt ghost particles

The Lake Baikal telescope in Siberia is one of many efforts to hunt for neutrinos in the world’s most remote places.

A glass orb, the size of a beach ball, plops into a hole in the ice and descends on a metal cable toward the bottom of the world’s deepest lake. Then another, and another. These light-detecting orbs come to rest suspended in the pitch-dark depths down as far as 4,000 feet below the surface. The cable carrying them holds 36 such orbs, spaced 50 feet apart. There are 64 such cables, held in place by anchors and buoys, 2 miles off the jagged southern coast of this lake in Siberia with a bottom that is more than 1 mile down.

This is a telescope, the largest of its kind in the Northern Hemisphere, built to explore black holes, distant galaxies and the remnants of exploded stars. It does so by searching for neutrinos, cosmic particles so tiny that many trillions pass through each of us every second. If only we could learn to read the messages they bear, scientists believe, we could chart the universe, and its history, in ways we cannot yet fully fathom.

“You should never miss the chance to ask nature any question,” said Grigori V Domogatski, 80, a Russian physicist who has led the quest to build this underwater telescope for 40 years. After a pause, he added: “You never know what answer you will get.”

It is still under construction, but the telescope that Domogatski and other scientists have long dreamed of is closer than ever to delivering results. And this hunt for neutrinos from the far reaches of the cosmos, spanning eras in geopolitics and in astrophysics, sheds light on how Russia has managed to preserve some of the scientific prowess that characterized the Soviet Union — as well as the limitations of that legacy.

The Lake Baikal venture is not the only effort to hunt for neutrinos in the world’s most remote places. Dozens of instruments seek the particles in specialized laboratories all over the planet. But the new Russian project will be an important complement to the work of IceCube, the world’s largest neutrino telescope, an American-led, $279 million project that encompasses about one-quarter of a cubic mile of ice in Antarctica.

Using a grid of light detectors similar to the Baikal telescope, IceCube identified a neutrino in 2017 that scientists said almost certainly came from a supermassive black hole. It was the first time that scientists had pinpointed a source of the rain of high-energy particles from space known as cosmic rays — a breakthrough for neutrino astronomy, a branch that remains in its infancy.

The field’s practitioners believe that as they learn to read the universe using neutrinos, they could make new, unexpected discoveries — much as the lensmakers who first developed the telescope could not have imagined that Galileo would later use it to discover the moons of Jupiter.

“It’s like looking at the sky at night, and seeing one star,” Francis L. Halzen, an astrophysicist at the University of Wisconsin, Madison, and the director of IceCube, said in a telephone interview, describing the current state of the hunt for the ghostly particles.

Early work by Soviet scientists helped inspire Halzen in the 1980s to build a neutrino detector in the Antarctic ice. Now, Halzen says his team believes it may have found two additional sources of neutrinos arriving from deep in space — but it is difficult to be certain because no one else has detected them. He hopes that will change in the coming years as the Baikal telescope expands. 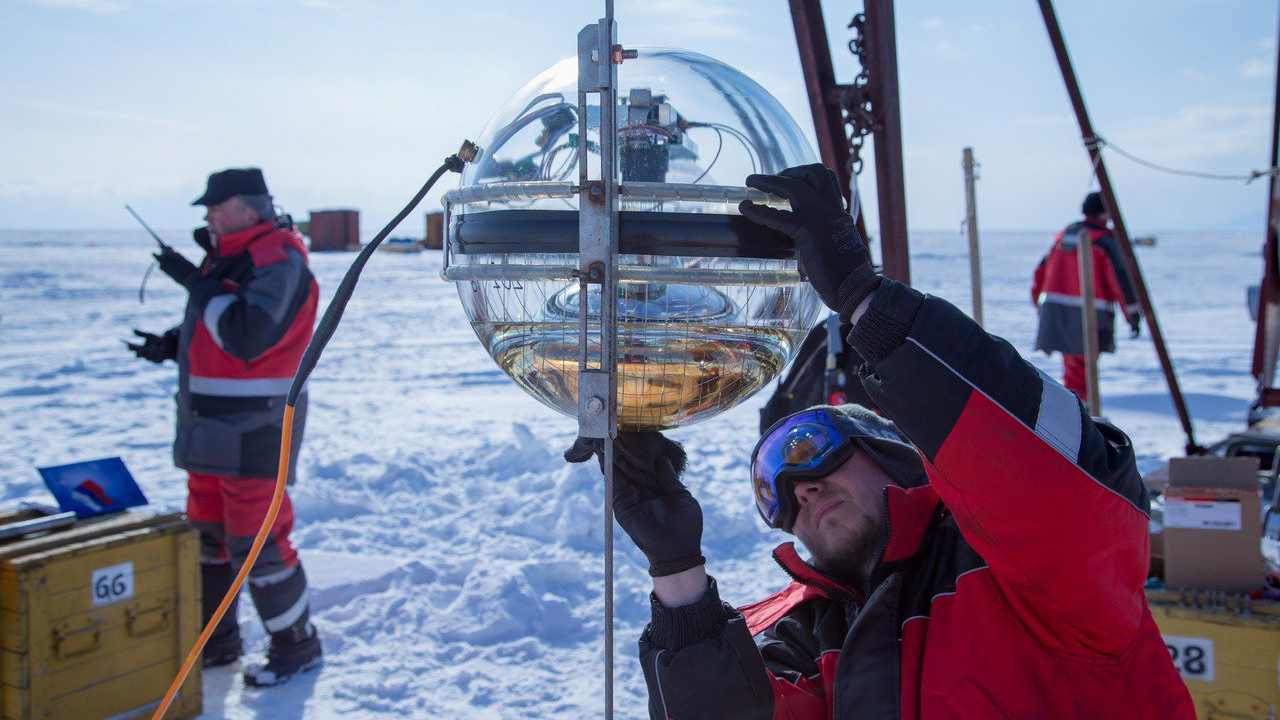 The Baikal Gigaton Volume Detector (Baikal-GVD) deep underwater neutrino telescope, an international project in the field of astroparticle physics and neutrino astronomy, was set up for a launch ceremony on Lake Baikal, Russia on 13 March 2021. Image Credit: VCG

“We have to be superconservative because nobody, at the moment, can check what we are doing,” Halzen said. “It’s exciting for me to have another experiment to interact with and to exchange data with.”

In the 1970s, despite the Cold War, the Americans and the Soviets were working together to plan a first deep water neutrino detector off the coast of Hawaii. But after the Soviet Union invaded Afghanistan, the Soviets were kicked out of the project. So, in 1980, the Institute for Nuclear Research in Moscow started its own neutrino-telescope effort, led by Domogatski. The place to try seemed obvious, although it was about 2,500 miles away: Baikal.

The project did not get far beyond planning and design before the Soviet Union collapsed, throwing many of the country’s scientists into poverty and their efforts into disarray. But an institute outside Berlin, which soon became part of Germany’s DESY particle research center, joined the Baikal effort.

Christian Spiering, who led the German team, recalls shipping hundreds of pounds of butter, sugar, coffee and sausage to sustain the annual winter expeditions onto the Baikal ice. He also brought to Moscow thousands of dollars worth of cash to supplement the Russians’ meager salaries.

By the mid 1990s, the Russian team had managed to identify “atmospheric” neutrinos — those produced by collisions in Earth’s atmosphere — but not ones arriving from outer space. It would need a bigger detector for that. As Russia started to reinvest in science in the 2000s under President Vladimir Putin, Domogatski managed to secure more than $30 million in funding to build a new Baikal telescope as big as IceCube. 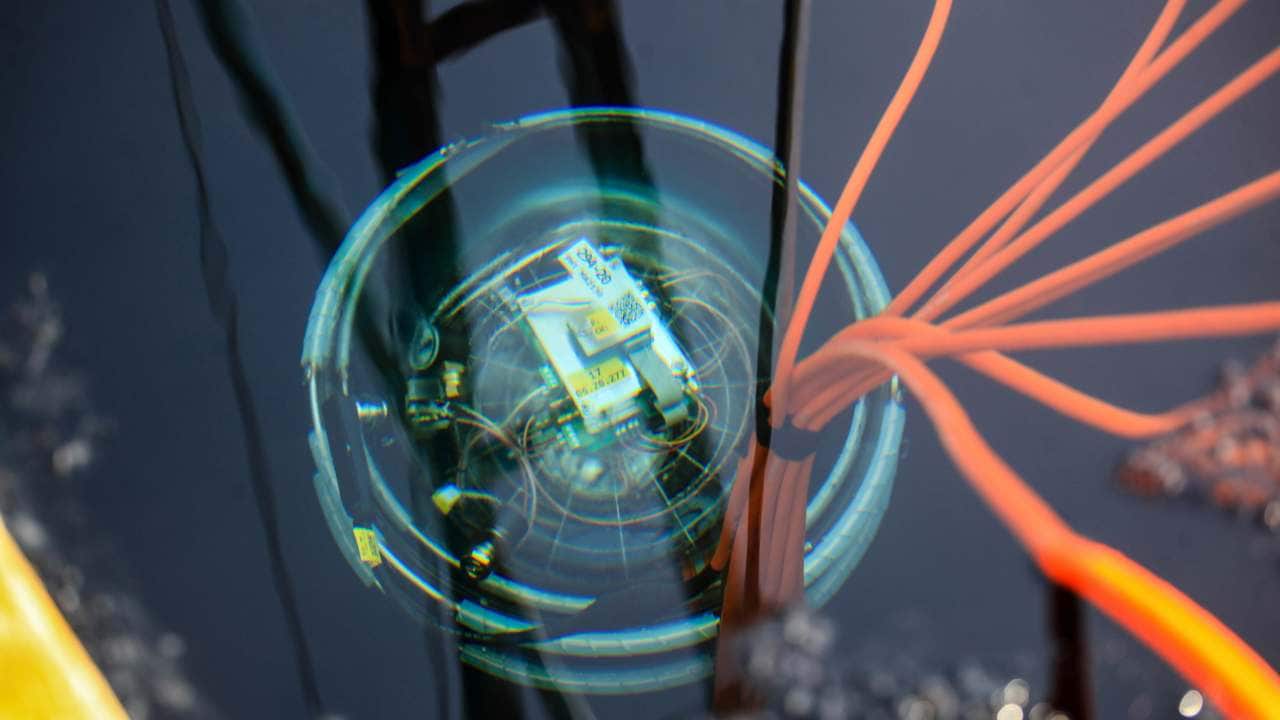 The Baikal telescope looks down, through the entire planet, out the other side, toward the center of our galaxy and beyond, essentially using Earth as a giant sieve. For the most part, larger particles hitting the opposite side of the planet eventually collide with atoms. But almost all neutrinos — 100 billion of which pass through your fingertip every second — continue, essentially, on a straight line.

Yet when a neutrino, exceedingly rarely, hits an atomic nucleus in the water, it produces a cone of blue light called Cherenkov radiation. The effect was discovered by Soviet physicist Pavel A. Cherenkov, one of Domogatski’s former colleagues down the hall at his institute in Moscow.

If you spend years monitoring a billion tons of deep water for unimaginably tiny flashes of Cherenkov light, many physicists believe, you will eventually find neutrinos that can be traced back to cosmic conflagrations that emitted them billions of light-years away.

The orientation of the blue cones even reveals the precise direction from which the neutrinos that caused them came. By not having an electrical charge, neutrinos are not affected by interstellar and intergalactic magnetic fields and other influences that scramble the paths of other types of cosmic particles, such as protons and electrons. Neutrinos go as straight through the universe as Einsteinian gravity will allow.

That is what makes neutrinos so valuable to the study of the universe’s earliest, most distant and most violent events. And they could help elucidate other mysteries, such as what happens when stars far more massive than the sun collapse into a superdense ball of neutrons roughly 12 miles across — emitting huge quantities of neutrinos.

“It travels the universe, colliding with practically nothing and no one,” Domogatski said of the neutrino. “For it, the universe is a transparent world.”

Because it essentially looks through the planet, the Baikal telescope studies the sky of the Southern Hemisphere. That makes it a complement to IceCube in Antarctica, along with a European project in the Mediterranean that is at an earlier phase of construction.

“We need an equivalent to IceCube in the Northern Hemisphere,” said Spiering, who remains involved in both the IceCube and Baikal projects.

Domogatski said that his team is already exchanging data with neutrino hunters elsewhere, and that it has found evidence backing up IceCube’s conclusions about neutrinos arriving from outer space. Still, he acknowledges that the Baikal project is lagging far behind others in developing the computer software necessary to identify neutrinos in close to real time.

Despite the project’s significance, it is still operating on a shoestring budget — almost all of the roughly 60 scientists working on the telescope usually spend February and March at their camp in Baikal, installing and repairing its components. IceCube, by contrast, involves some 300 scientists, most of whom have never been to the South Pole.

These days, Domogatski no longer joins the annual winter expeditions to Baikal. But he still works out of the same Soviet-era institute where he kept his neutrino dream afloat through communism, the chaotic 1990s and more than two decades of Putin's rule.

“If you take on a project, you must understand that you have to realize it in any conditions that come up,” Domogatski said, banging on his desk for emphasis. “Otherwise, there’s no point in even starting.”