Remember that Ossendowski, who went across Tibet from Russia escaping from the revolution, received information on the nature of cavern worlds below, which is also quoted in the book The Hollow Earth.

"All the subterranean caverns of America are inhabited by an ancient people who disappeared from the world. These people and the subterranean regions where they dwell are under the supreme authority of the King of the World. Both the Atlantic and Pacific Oceans were once the home of vast continents which later became submerged; and their inhabitants found refuge in the Subterranean World. The profounder caverns are illuminated by a resplendent
light which permits the growing of cereals and other vegetables, and gives the inhabitants a long life-span free from disease. In this world exists a large population and many tribes."

We have quite a few sources on cavern worlds below Europe, and even on the underground manipulation of the surface in that region of the world. But Ossendowski and Roerich are the only sources we have on the Tibetan underground, so it is important to conserve these sources. And, the book is online, so do access it, and it is permitted to download. 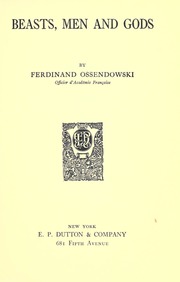 Also, remember that Tibet is next to China. If there are tunnels that pass underneath the Pacific Ocean to America, then they pass under China. So who is manipulating China?

Too bizarre to believe? Without getting into it, the Pueblo Indians were Tibetan. The Shoshoni Indians were from the region of Cham Cham (Pronunciation “Sham Sham”, I think) And it is in modern China way over near Tibet.

I certainly don’t think they walked.

SUPER THANKS NEXT BOOK HOLLOW EARTH PLEASE HARI OM THANKS