Mysterious X-rays are flaring out of Uranus !

List members , one thing is absolutely clear - molten iron does NOT emit X rays . So , planets cannot have a core made of molten iron .

Now stars emit X rays all the time...so it looks like , (Hollow) planets too may have a miniature Inner Sun at their core - this maybe the only viable answer :- 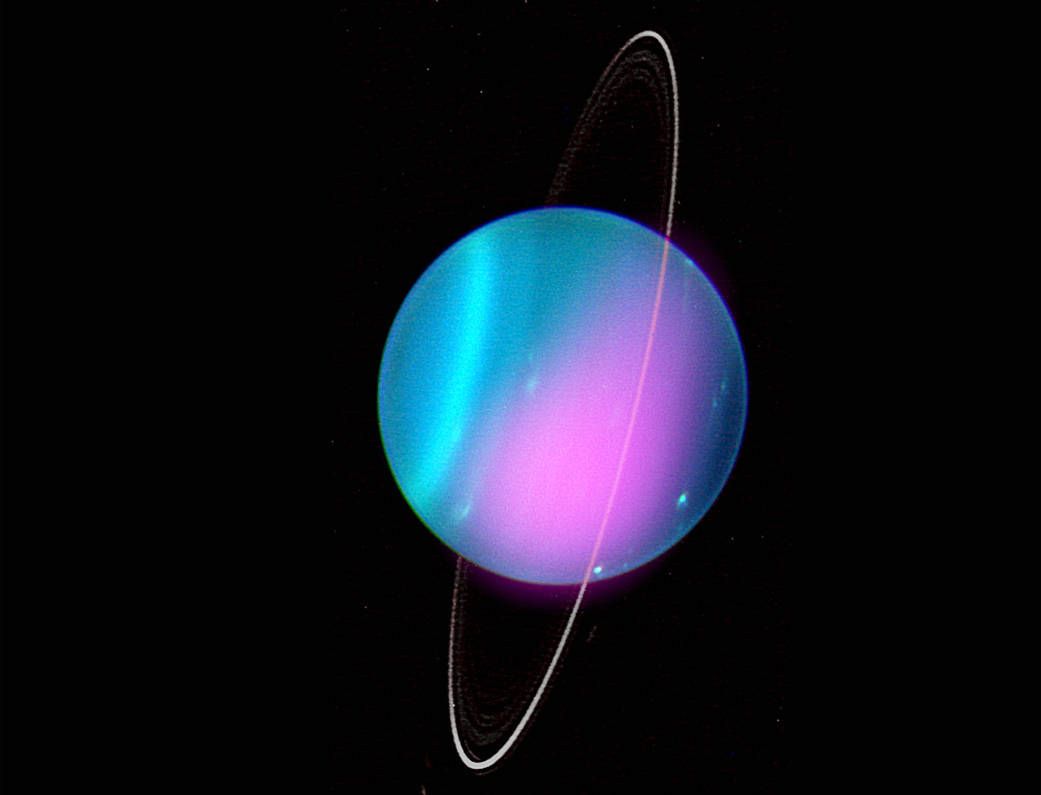 Mysterious X-rays are flaring out of Uranus

Uranus is always full of surprises.

Mysterious X-rays are flaring out of Uranus

Uranus is always full of surprises. 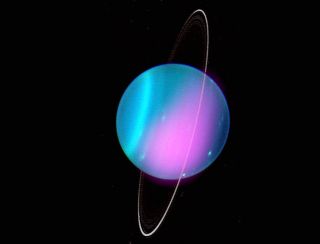 For the first time, astronomers have detected mysterious X-rays flaring out of Uranus.

How is this happening? According to NASA scientists, Uranus is so massive that it could just be scattering X-rays given off by the sun more than a billion miles away. Or, perhaps the fine rings of dust surrounding Uranus are generating their own radiation through some unknown process. A closer study of Uranus is required to know for sure.

Uranus is cold, windy and made almost entirely of ice and gas. Even though it's enormous (with a diameter about four times Earth's), Uranus is difficult to study in depth. Only one spacecraft — NASA's Voyager 2 — has ever made the perilous journey to the planet, forcing scientists to rely mostly on telescope observations much closer to Earth in order to study the ice giant.

In a new study published March 31 in the journal JGR Space Physics, astronomers looked at some archival observations of Uranus taken by NASA's Chandra X-Ray Observatory, an orbiting telescope that scours the universe for sources of X-ray radiation.

According to NASA, X-rays are emitted when matter is heated to millions of degrees, like when stars explode or when matter swirls around the edge of a black hole at near light speed. Until recently, X-ray emissions had been detected from every planet in the solar system except Uranus and Neptune. In most cases, these emissions occur when X-rays created by the sun crash into atoms in a planet's atmosphere, scattering the light back into space.

In the new study, researchers looked at Chandra data taken from Uranus in 2002 and 2017, and saw clear evidence of X-ray emissions in both years. Several of these emissions had a brightness consistent with solar X-rays being scattered back outward, the researchers wrote. However, in the 2017 observations, the team detected a possible "flare" of X-rays, where the brightness of emissions around Uranus increased four times from one day to the next.

According to the researchers, "this may be indicative of additional X‐ray emission processes at Uranus," besides mere solar scattering.

What mysterious phenomenon could be generating the X-rays from Uranus? One possibility lies in the planet's rings. According to the researchers, the environment around Uranus is rich in charged particles such as protons and electrons; these particles could be colliding into the planet's rings, producing X-rays in the process. (A similar phenomenon has been observed in Saturn's rings, the team wrote.)

It's also possible that the X-rays are the result of some sort of auroral process, in which charged particles from the sun are colliding with Uranus' magnetic-field lines and causing a distinct glow. However, further observations are required to flesh out this hypothesis. For now, the X-ray lights of Uranus remain a mystery.

Folks , it's a no-brainer that stars emit X-rays as a by-product of nuclear processes going on in their interior...so this has got to be applicable to planets too , albeit on a much smaller scale - given the Inner Sun of Hollow planets is miniscule compared to stars .

List members , this X-Ray emission is a widespread phenomenon exhibited by most planets , including Earth :-

X-RAY EMISSION FROM JUPITER, SATURN, AND EARTH: A SHORT REVIEW

Jupiter, Saturn, and Earth — the three planets having dense atmosphere and a well developed magnetosphere — are known to emit X-rays. Recently, Chandra X-ray observatory has observed X-rays from these planets, and XMM-Newton has observed them from Jupiter and Saturn. These observations have provided improved morphological, temporal, and spectral characteristics of X-rays from these planets. Both auroral and non-auroral (low-latitude) “disk” X-ray emissions have been observed on Earth and Jupiter. X-rays have been detected from Saturn's disk, but no convincing evidence for X-ray aurora on Saturn has been observed. The non-auroral disk X-ray emissions from Jupiter, Saturn, and Earth, are mostly produced due to scattering of solar X-rays. X-ray aurora on Earth is mainly generated via bremsstrahlung from precipitating electrons and on Jupiter via charge exchange of highly ionized energetic heavy ions precipitating into the polar atmosphere. Recent unpublished work suggests that at higher (>2keV) energies electron bremsstrahlung also plays a role in Jupiter's X-ray aurora. This paper summarizes the recent results of X-ray observations on Jupiter, Saturn, and Earth mainly in the soft energy (∼0.1—2.0keV) band and provides a comparative overview.