Folks , the Arctic explorer ship the Polarstern has "proudly" claimed to have reached the North Pole just couple of weeks ago !!??

Hmmm....did they rely on GPS readings to verify 90 degrees North :)) Well , they might have actually reached 90 degrees North latitude , given that the North Polar opening is NOT actually at 90 degree North , but a bit closer to Siberia - so , not a surprise to us .

However , the members of this mission titled "MOSAiC" , have admitted to virtually open , ice free water - from 87 degree North , right upto the North Pole !

During the final leg of the expedition, the research vessel Polarstern reaches the northernmost point on the Earth

[19. August 2020]
At 12:45 pm on 19 August 2020 the German research icebreaker Polarstern reached the North Pole. The ship followed a route to the north of Greenland – and through a region that, in the past, was densely covered with ice, including multiyear ice. The journey from the northern Fram Strait to the Pole only took six days to complete. To mark this momentous event, countless members of the expedition team gathered on the bridge, where their eyes were glued to the position monitors, and then celebrated having reached the Pole together.

This year satellite imagery indicated that, even past 87° North, the ice cover was surprisingly loose. Accordingly, MOSAiC Expedition Leader Prof Markus Rex and Polarstern Captain Thomas Wunderlich decided to head north, starting from the position of the last resupply rendezvous in the northern Fram Strait between Greenland and Svalbard. “Up until 87° 30’ North, for the most part we passed through open water, in some cases stretching to the horizon,” recalls Prof Markus Rex from the Alfred Wegener Institute, Helmholtz Centre for Polar and Marine Research. “Based on the satellite imagery, at first we weren’t sure whether the loose ice cover was due to wind and currents, and were concerned that, if it was, a change in weather conditions could compact it again. Then we would have been caught in a mousetrap, and could have become trapped in the ice,” reports the MOSAiC Expedition Leader, who had previously reached the North Pole on board a research aircraft, in 2000. Once in the region, however, they found that much of the sea ice truly had melted away, and hadn’t simply been broken up by the wind. This is yet another unique phenomenon that was observed and investigated during MOSAiC, following the substantially accelerated melting rates in the Siberian sector in July. 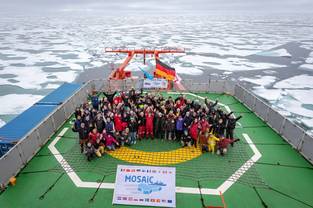 For the final phase of MOSAiC, the expedition team is focusing on the freezing phase: the last piece of the puzzle in terms of observing the Arctic ice throughout its annual cycle. After the MOSAiC floe, as expected, broke up near the ice edge in Fram Strait in July, the team set course further north, where the freezing phase will soon begin.

“I’m very surprised to see how soft and easy to traverse the ice up to 88° North is this year, having thawed to the point of being thin and porous,” says Captain Thomas Wunderlich. “Even after passing 88° North we mostly maintained a speed of 5-7 knots; I’ve never seen that so far north,” says Polarstern’s captain. “For this region, the current situation is historic. Normally it’s wise to avoid the region north of Greenland, because it’s home to the thicker and older ice, and virtually impassable. But now we’re finding extended stretches of open water, reaching nearly to the Pole.” 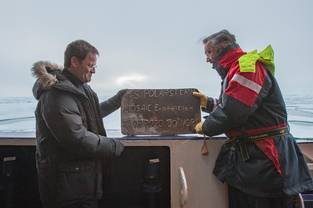 At 12:45 pm on 19 August, the time had finally come: an announcement was made on the ship’s speakers, inviting everyone on board to come to the bridge and share the moment when the North Pole was reached.

The ship’s course was determined on the basis of sea-ice charts, and was selected in order to provide the fastest access to the target region for the closing segment of MOSAiC, in the centre of the Transpolar Drift.

Moving on from the Pole, the Polarstern may follow the Transpolar Drift a bit further (i.e., i.e. from the pole towards Siberia), until she reaches ca. 87° North. “Depending on the ice conditions, however, we’ll also start looking for a suitable floe in the vicinity of the North Pole, so that we can start working on the ice as soon as possible,” explains Markus Rex.The researchers’ priorities will be the beginning of freezing and the early phase of ice formation. Ideally, they will study these processes on an ice floe that is as similar to the MOSAiC floe as possible.

Chief scientist and the captain hold a steel, jpg | 1 MB

Chief scientist and the captain hold a steel, jpg | 1 MB

Photo of cheif scientist Markus Rex and on, jpg | 1 MB

The Alfred Wegener Institute pursues research in the polar regions and the oceans of mid and high latitudes. As one of the 19 centres of the Helmholtz Association it coordinates polar research in Germany and provides ships like the research icebreaker Polarstern and stations for the international scientific community.

Folks , this ship called Polarstern will be spending the next few months "deliberately trapped in ice" at about 87 degree North , more towards the Siberian side of the Pole...hmm very fascinating indeed !

I really doubt , the common public will get to see their raw data on the public domain :))