I have some vague memories of these Longyou Caverns from a while back. Maybe it was on this list, maybe not. 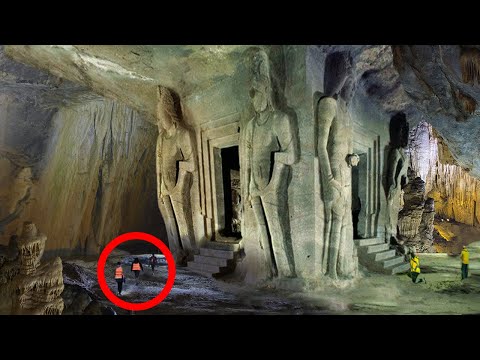 Those people seem very small in relation to the doorway, of course. That doorway looks like something made for giants. And I don't know if those steps are original, either. They look big for the humans, but still quite small in proportionate comparison with the doorway.

The Vedic literature tells that humans on the surface of the Earth were very tall before the Kaliyuga began, before the cloud mantle fell. And the life span was a thousand years. That yuga was called the Dvarpara Yuga. And the Dvarpara lasted just under a million years. But before that one was the Treta Yuga, and the life span was, let's just say, even longer, and people were even taller.

Would the doorway have been appropriate for them? Could those caves have been carved out that long ago? The size has to tell us something about the age.

Unless the dwellers were always subterranean dwellers, because in the depths of the planet, sheltered from The Sun's harmful rays, people grow to the size of giants.

But these caves are quite close to the surface. So I doubt it.

It is hard for me to figure out.

Great video @deandddd , these caves are truly impressive and everything there is giant sized . It really looks like it was made for or by giants - in which case they could be LOT older than current estimates . This place has that uncanny feel of having been "forgotten" by mankind , for millennia...

Yes, "forgotten" by mankind, but well kept by those who live within the crust.

It's spooky when you think about it.