The discovery of a giant sinkhole in China and a huge, ancient unexplored world beyond our feet is extraordinary in many ways.

Jan Bartek - AncientPages.com - The discovery of a giant sinkhole in China and a huge, ancient unexplored world beyond our feet is extraordinary in many ways.

The sinkhole located in South China's Guangxi Zhuang Autonomous Region is 630-foot deep, 1,000-foot long, and 490-foot wide. It is one of 30 known sinkholes located in Leye County of the autonomous region.

Chinese cave explorers and scientists who entered the sinkhole say there is a stunning ancient forest with 140-foot-tall trees growing at the bottom.

This ancient lost, unknown world offers a possibility of finding life forms that have not been seen before, according to the Xinhua news agency.

Zhang Yuanhai, a senior engineer with the Institute of Karst Geology of China Geological Survey, said the sinkhole
volume exceeds 5 million cubic meters and can be categorized as a large sinkhole. It is one of 30 known sinkholes located in Leye County of the autonomous region.

Zhang said that there are three big caves in the wall, which are presumed to be the remains of the early evolution of the sinkhole. The bottom of the sinkhole has a well-preserved primitive forest.

Chen Lixin, leader of the Guangxi 702 cave expedition team, said the ancient trees growing at the bottom are nearly 40 meters high, and the dense shade plants are up to one's shoulders.

The expedition was completed after the team members abseiled down more than 100 meters and trekked for several hours to reach the pit's bottom. They returned to the ground safely.

Scientists believe the subterranean habitat may even harbor some still unknown species.

"I wouldn't be surprised to know that there are species found in these caves that have never been reported or described by science until now," George Veni, executive director of the National Cave and Karst Research Institute in New Mexico, told AccuWeather.

Such unknowns are what lend to their mysterious nature.

“You don’t know what you’re going to find in each corner, and sometimes we are surprised and occasionally something breaks through our own expectations,” he added.

For scientists and researchers who devote their lives to studying sinkholes and caves, Veni said, “they inspire us and challenge us to learn and explore more.”

Folks , take a closer look at this image...do you notice the outline of an entire cluster of nearly identical PYRAMID shaped hills...hmm ! I suspect the other "hills" (natural or artificial ??) in the cluster are also hollow and may contain similar sinkholes - that are not yet exposed !!

**I am suggesting that these were actually ancient (hollow) pyramids built by an advanced civilisation , that were later abandoned and got covered all over by vegetation . 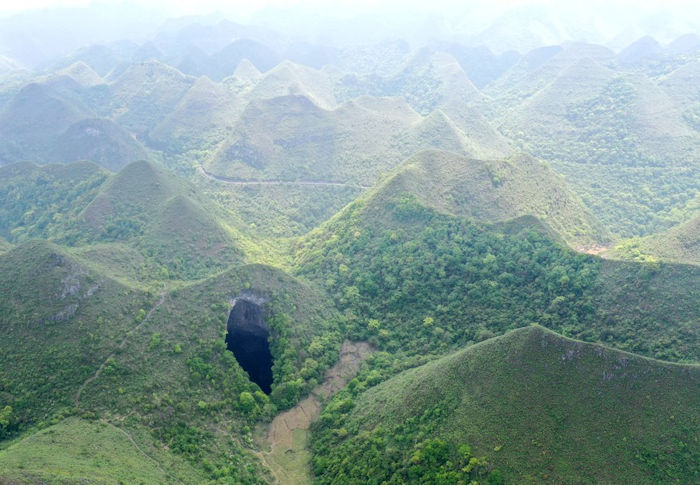