Godzilla vs. Kong: The Hollow Earth Explained (in the movie)

Folks , have fun watching this - it's a cinematic take on Hollow Earth . Hollywood trying their hand at imagining Hollow Earth :- 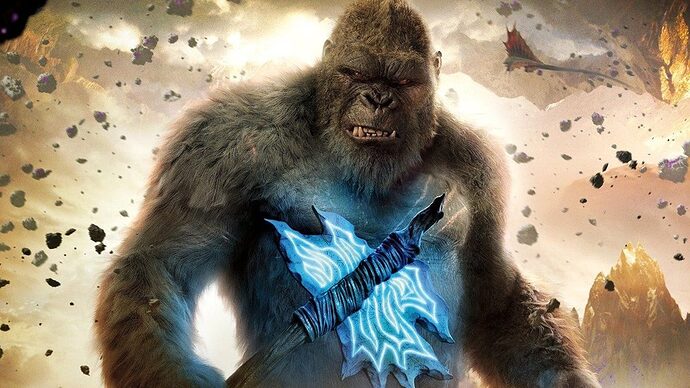 Everything you need to know about the Monsterverse's Hollow Earth.

Everything you need to know about the Monsterverse's Hollow Earth.

The biggest monster smackdown in all of movie history is almost here. Godzilla vs. Kong will be hitting screens soon, and aside from the creature combat the Monsterverse sequel looks like it will be expanding on the notion of the Hollow Earth. The filmmakers confirmed as much when IGN visited the set of the film.

The fringe scientific theory has played a part in the previous Monsterverse flicks as an explainer for how Godzilla travels across the planet, but in the new film, we might get an insight into how the Hollow Earth shaped the creation of the Titans and why they ended up surfacing on our world instead of continuing to live beneath it.

If you're scratching your head and asking what the Hollow Earth is, then we're here to answer all your burning questions, as well as explain how it's connected to the Monsterverse itself.

What Is the Hollow Earth?

Well, the answer is in the name. The Hollow Earth theory posits just that: The Earth is entirely hollow and in most versions of the legend there are people or creatures living within it. This can vary depending on the theory or story, but Hollow Earth tales generally feature an entirely subterranean culture and community miles underneath the surface of our home planet. It's not just fictional, though.

There are people who claim our true Earth is hollow too. Some of those proponents even claim that there is a secondary sun within our planet, fueling those who live within the Hollow Earth. While it might seem utterly wild, it has as a theory at times been supported by famed scientists like Edmund Halley -- who potentially came up with the idea -- while also becoming a staple of science fiction storytelling as well as a popular conspiracy theory.

Where Have You Seen it Before?

The Hollow Earth has popped up in everything from Shakespeare to classic adventure novels. One of the earliest and most famous examples is Jules Verne's Journey to the Center of the Earth which was first published in 1864. In that iconic story, a professor discovers a world beneath our world after breaking a runic cryptogram. Inside our Earth lies an entirely new world, one filled with prehistoric creatures, oceans, and strange anti-gravity wells which can help you travel across the world in mere hours (we'll come back to those). But over one hundred years before that, Ludvig Holberg was also playing in the world of the Hollow Earth with his 1741 novel, Niels Klim's Underground Travels. The story centers on a young man who falls into a cave and ends up in an interior landscape with its own space, sun, and even talking trees. Neither of these was the first fictional mention of the ever more popular concept though.

We mentioned Shakespeare earlier and that would be due to A Midsummer's Night's Dream, which contains the line "I'll believe as soon / This whole earth may be bored and that the moon / May through the center creep and so displease / Her brother's noontide with Antipodes." According to Hollow Earth enthusiasts, this is one of the earliest references to the theory, which actually predates Edmund Halley's essay on the subject which brought it to the scientific forefront.

It's not all centuries-old literature that features the Hollow Earth, though. Aside from the many Journey to the Center of the Earth adaptations, movies like The Mole People (1956), At the Earth's Core (1976), Alien From LA (1988), and even kids films like City of Ember (2008) and Ice Age: Dawn of the Dinosaurs (2009) retell the Hollow Earth myth in their own style.

It's not just movies, either. Gears of War builds the Hollow Earth into its lore with the Hollow, a massive series of underground tunnels created by huge subterranean creatures. That brings us to the Monsterverse, which uses a very similar reimagining of the lore in its storytelling.

How Does the Hollow Earth Play into the Monsterverse?

The theory was first introduced to the Monsterverse in Kong: Skull Island. Scientist Houston Brooks (Corey Hawkins) is a believer in the theory and writes a paper claiming that it is scientifically accurate rather than a fringe belief that has long been disproven. It's this paper that sees him recruited to Monarch. His paper turns out to be true and Skull Island is revealed to be almost entirely hollow. This makes it a direct link to the Hollow Earth, as that's where the subterranean tunnels lead. And surprising no one, the creatures that live there -- the Skull Crawlers -- are utterly terrifying. But in worse news for the world, Huston and Bill Randa (John Goodman) believed there were many, many more of these Hollow Earth entryways across the world that had yet to be discovered.

That was proven to be true during Godzilla: King of the Monsters. While much of the story focused on the many Titans doing battle, we learned a little more about the Hollow Earth and how it works in the Monsterverse. Not only was it confirmed that Godzilla was using subterranean tunnels to swim across the globe, but we also got a glimpse of what seemed to be a now decimated Hollow Earth community. While Godzilla is healing, we see an Atlantis-inspired landscape that hints that at one time humanoid creatures lived in the Hollow Earth alongside the massive Titans who were potentially born and definitely worshipped by the extinct culture. The film also featured Skull Crawlers leaving their subterranean nests on Skull Island when they were called by the Titan Ghidorah, which confirmed the Titans can communicate with each other using the Hollow Earth network, hinting at bigger threats to come for humanity in the future.

What Does It Mean for Godzilla vs. Kong?

From the trailers and interviews with the filmmakers, it looks like Godzilla vs. Kong will be expanding on this lore. There are multiple moments we've seen so far that hint at an origin story for Kong that's centered around the Hollow Earth. How do we know that? Well, whenever we see young Kong he seems to be in a jungle, but instead of sky there's nothing but craggy rock, hinting that he is in fact inside the Hollow Earth.

Answering the question of where the Titans come from has long been at the heart of the Monsterverse and the Hollow Earth would offer up an easy answer. If the creatures originated from there, then we get to ask why they left. Could it be there's a greater threat living under the crust of our Earth? A mega-Titan that drove even Kong and Godzilla from their homes? We'll have to check out the monster mash movie when it hits screens to find out.