List members , there is a very deep undersea ridge in about the center of the Arctic ocean that could hold the key to many mysteries of the Hollow Earth entrances :-

The Gakkel Ridge is one of the most mysterious mountain ranges on earth, found deep beneath the sea ice of the Arctic Ocean between Greenland and Siberia.

It is volcanically active and home to many deep hydrothermal vents. Very little deep-sea research has been conducted in this region, however an expedition by the Woods Hole Oceanographic Institution in 2007 discovered peculiar white mats of microbes spread across the dark volcanic substrate that contained many new species. It is believed that continued exploration and protection of the area will reveal life forms that are far different than those found elsewhere on Earth, unlocking secrets of our planet.

Folks , here is some more information on this fascinating subject...AGAVE is the name of a project to study this ecosystem in greater detail , though I get a strong whiff that insights from that expedition in 2007 , have only been "selectively released" into the public domain :)) The most important discoveries from it have probably been "Classified" already !

The Arctic Gakkel Vents (AGAVE) Expedition: Technology Development and the...

Deep-sea hydrothermal fields on the Gakkel Ridge beneath the Arctic ice cap provide perhaps the best terrestrial analogue for volcanically-hosted chemosynthetic biological communities that may exist beneath the ice-covered ocean of Europa. In both...

Deep-sea hydrothermal fields on the Gakkel Ridge beneath the Arctic ice cap provide perhaps the best terrestrial analogue for volcanically-hosted chemosynthetic biological communities that may exist beneath the ice-covered ocean of Europa. In both cases the key enabling technologies are robotic (untethered) vehicles that can swim freely under the ice and the supporting hardware and software. The development of robotic technology for deep- sea research beneath ice-covered oceans thus has relevance to both polar oceanography and future astrobiological missions to Europa. These considerations motivated a technology development effort under the auspices of NASA's ASTEP program and NSF's Office of Polar Programs that culminated in the AGAVE expedition aboard the icebreaker Oden from July 1 - August 10, 2007. The scientific objective was to study hydrothermal processes on the Gakkel Ridge, which is a key target for global studies of deep-sea vent fields. We developed two new autonomous underwater vehicles (AUVs) for the project, and deployed them to search for vent fields beneath the ice. We conducted eight AUV missions (four to completion) during the 40-day long expedition, which also included ship-based bathymetric surveys, CTD/rosette water column surveys, and wireline photographic and sampling surveys of remote sections of the Gakkel Ridge. The AUV missions, which lasted 16 hours on average and achieved operational depths of 4200 meters, returned sensor data that showed clear evidence of hydrothermal venting, but for a combination of technical reasons and time constraints, the AUVs did not ultimately return images of deep-sea vent fields. Nevertheless we used our wireline system to obtain images and samples of extensive microbial mats that covered fresh volcanic surfaces on a newly discovered set of volcanoes. The microbes appear to be living in regions where reducing and slightly warm fluids are seeping through cracks in the fresh volcanic terrain. These discoveries shed new light on the nature of volcanic and hydrothermal processes in the Arctic basin, and also demonstrate the importance of new technologies for advancing science beneath ice-covered oceans. Operationally, the AUV missions pushed the envelope of deep-sea technology. The recoveries were particularly difficult as it was necessary to have the vehicle find small pools of open water next to the ship, but in some cases the ice was in a state of regional compression such that no open water could be found or created. In these cases a well-calibrated, ship-based, short-baseline acoustic system was essential for successful vehicle recoveries. In all we were able to achieve a variety of operational and technological advances that provide stepping stones for future under-ice robotic missions, both on Earth and perhaps eventually on Europa.

Thanks @Soretna , I guess marine mammals like the enigmatic Bowhead whales who spend their entire lives in the Arctic Ocean , would be familiar with this mysterious underwater ridge and what openings into the Earth that it leads to !

Folks , this is quite literally , a deep dive on this mysterious Gakkel Ridge at the bottom of the Arctic Ocean :))

**On a more serious note though , this discovery of the EXPLOSIVE volcanism in the underwater East Gakkel Ridge (near 86°N, 85°E) , might finally help answer one of the most intriguing questions about the Arctic , that of the strange volcanic dust noticed by so many Arctic explorers , when no land was apparently in sight nearby...I may have found a clue to this "smoking gun" . Even these coordinates ring several bells about the location of an actual opening into the Hollow Earth , which we've so often speculated about , on this forum . The most crucial insight from the enclosed article is -

"These are the first pyroclastic deposits we've EVER found (!!) in such deep water, at oppressive pressures that inhibit the formation of steam, and many people thought this was not possible."

There is of course , a very high chance that this specific region of the Arctic Ocean floor has lava tubes , vents , crevices and other openings leading into Hollow Earth . Marine creatures might even be using these underwater openings to enter and exit the Earth's interior ! 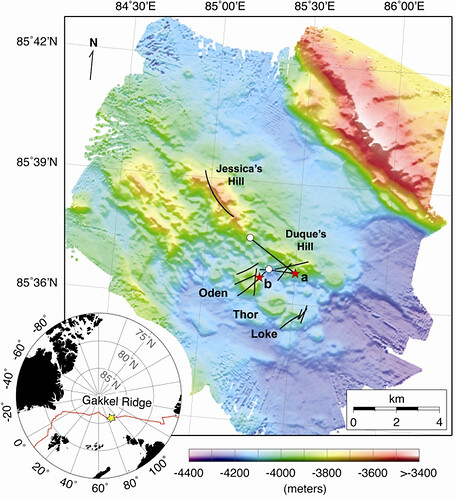 During January-September 1999 global seismic networks detected an earthquake swarm along the East Gakkel Ridge (near 86°N, 85°E). Sonar mapping in May 1999 identified a cone at the western end of a line of volcanoes that corresponded to the average...

A sonar survey in 2001 along the ultraslow-spreading Gakkel Ridge (formerly known as the Nansen Cordillera and Arctic Mid-Ocean Ridge) by the USS Hawkbill submarine and the U.S. Coast Guard icebreaker Healy revealed two previously undiscovered volcanoes beneath the pack ice of the Arctic Ocean (BGVN 26:03). In July 2007, a research team led by Woods Hole Oceanographic Institution (WHOI) uncovered evidence of explosive volcanic eruptions in the same area of the seafloor.

At a depth of ~4 km, researchers found fresh, unweathered, jagged, glassy fragments of rock (pyroclastic deposits) spread out over an area of ~10 km2 around a series of small volcanic craters on the Gakkel Ridge (figure 1). According to WHOI geophysicist Rob Reves-Sohn, chief scientist of the expedition, as quoted in the 14 August 2008 issue of Oceanus, "These are the first pyroclastic deposits we've ever found in such deep water, at oppressive pressures that inhibit the formation of steam, and many people thought this was not possible. This means that a tremendous blast of carbon dioxide was released into the water column during the explosive eruption." Although no speculation was made by the scientists as to the age of the eruption(s) that caused these pyroclastics, the fresh nature of these surficial materials argue to their recency. 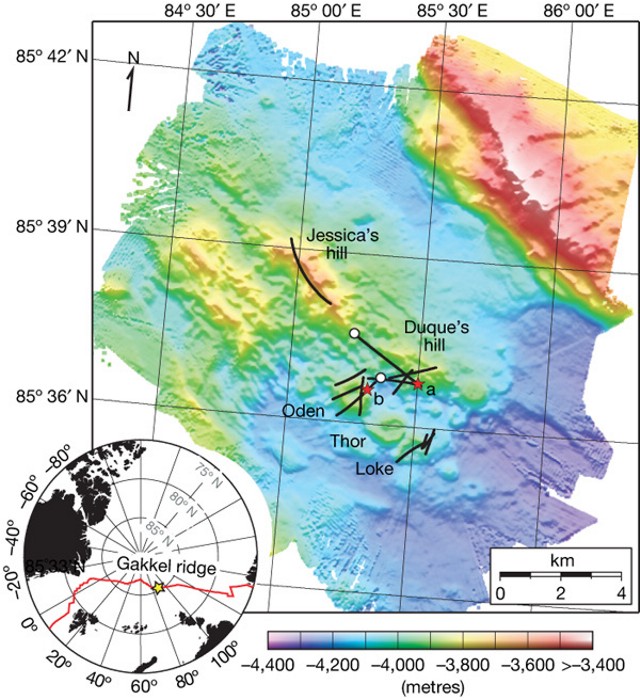 Figure 1. Detailed bathymetry (30-m grid spacing) of the Gakkel Ridge at 85°E in the Arctic Ocean based on July 2007 WHOI research cruise. The inset map shows the location of the 85°E segment (yellow star) along the Gakkel ridge (red line) in the Arctic basin. The main panel shows illuminated, color bathymetry of the 85°E segment acquired during the Arctic Gakkel Vents (AGAVE) expedition. The axial valley contains large numbers of distinctive, cratered volcanoes, including a cone on a fault terrace of the northern valley wall. Photographic bottom surveys were conducted along profiles shown as thin black lines on the map. Pyroclastic deposit samples were collected at sites shown by white circles, and the photographs shown in figure 2 were taken at the sites shown by the lettered (red) stars. Named features include two volcanic ridges in the center of the axial valley (Jessica's hill and Duque's hill), and three cratered volcanoes along a ridge-parallel fissure to the S (Oden, Thor, and Loke). Courtesy of Sohn and others (2008).

According to Cochran (2008), the Gakkel Ridge is the slowest spreading portion of the global system of mid-ocean ridges. Total spreading rates vary from 12.8 mm/year near Greenland to 6.5 mm/year at the Siberian margin.

A recent article by Sohn and others (2008) concerning the July 2007 expedition noted that roughly 60% of the Earth's outer surface is composed of oceanic crust formed by volcanic processes at mid-ocean ridges. Although only a small fraction of this vast volcanic terrain has been visually surveyed or sampled, the available evidence suggests that explosive eruptions are rare on mid-ocean ridges, particularly at depths below the critical point for seawater (a depth of ~ 3,000 m). A pyroclastic deposit has never been observed on the sea floor below 3,000 m, presumably because the volatile content of mid-ocean-ridge basalts is generally too low to produce the gas fractions required for fragmenting a magma at such high hydrostatic pressure. Liu and others (2008) reported on recent analyses of many major and trace element collected from Gakkel Ridge.

The July 2007 expedition acquired photographs and video images of 'zero-age' volcanic terrain along the ridge and beneath the ice-cover ocean's surface. The axial valley at 4,000 m water depth was blanketed with unconsolidated pyroclastic deposits. Those included bubble-wall fragments (limu o Pele, also know as Pele's seaweed?fragments of large glass bubbles that shatter into pieces of curved, paper-thin, bubble walls), covering a large (greater than 10 km2) area (figure 2). At least 13.5 weight percent CO2 is necessary to fragment magma at these depths, which is about tenfold above the highest values previously measured in a mid-ocean-ridge basalt.

Figure 2. Photographs of pyroclastic deposits taken during July 2007 WHOI research cruise. (a) One frame from a high-definition video camera taken on the S side of Duque's hill (see figure 1 for location). About 10 cm (visually estimated and confirmed during sampling) of pyroclastic material is piled atop a high-standing, weathered, pillow feature. The exoskeleton of an as yet unidentified species of hexactinellid sponge (glass sponge, or a sponge with a skeleton made of 4- and/or 6-pointed siliceous spicules) is visible in the foreground. (b) High-definition video frame grab of talus blocks possibly representing ejecta from a vulcanian explosion on Oden volcano (see figure 1 for location). (c) Glassy, granular, pyroclastic material. (d) Bubble wall fragment from pyroclastic deposit. Courtesy of Sohn and others (2008).

Sohn and others (2008) note that these observations raise important questions about the accumulation and discharge of magmatic volatiles at ultraslow spreading rates on the Gakkel ridge. They also demonstrate that large-scale pyroclastic activity is possible along even the deepest portions of the global mid-ocean ridge volcanic system.

The exact spot of volcanic eruption marked on the map in my earlier post , is closer to Siberia than Greenland...that again ticks off many boxes for proximity to one of the Polar openings we've discussed quite often .