List members , this is a spectacular cave system in central Asia :-

The Dark Star cave system in a remote corner of Uzbekistan might one day be crowned the ‘world’s deepest cave’. Hidden inside the subterranean labyrinth lie geological time capsules that hold the secret to Earth’s past and future climate.

The Dark Star cave system in a remote corner of Uzbekistan might one day be crowned the ‘world’s deepest cave’. Hidden inside the subterranean labyrinth lie geological time capsules that hold the secret to Earth’s past and future climate.

“Oranges, reds, yellows… a kaleidoscope of colour. It was like walking in the Alps in autumn. Truly amazing.” Israeli geologist Boaz Langford is describing one of the vast caverns in Dark Star – a huge cave system tucked inside the Baisun-Tau mountain range in an isolated region of Uzbekistan. Langford was part of the international team of scientists and cavers who explored the system in 2014.

“In another branch there are frozen lakes; elsewhere, huge waterfalls. The variety of sights is incredible. Every area is different. Dark Star is like no other. Totally unusual. I’m a scientist, and not very religious, but there is something spiritual about that place.”

Political instability and its remote location have kept the depths of Dark Star (named after a 1974 sci-fi comedy film) hidden from human eyes. But in 1990, a British team managed to reach one of the entrances and so exploration of this dark underworld began.

Around 17km of passages, along with additional entrances, have since been discovered, but all of the openings sit halfway up a 200m-high limestone cliff. And just getting to the base camp at its foot is a long and treacherous journey.

Langford and his colleagues met the rest of the expedition team in the Uzbek capital Tashkent. Loading all their equipment onto a bus, they drove 160km along part of the ancient Silk Road towards Samarqand, before switching to a six-wheeled truck and heading south across arid plains in the direction of the Baisun district on the Afghan border.

At the foot of the Baisun-Tau mountain range, they ditched the truck and continued on foot for two days, with donkeys lugging their gear. 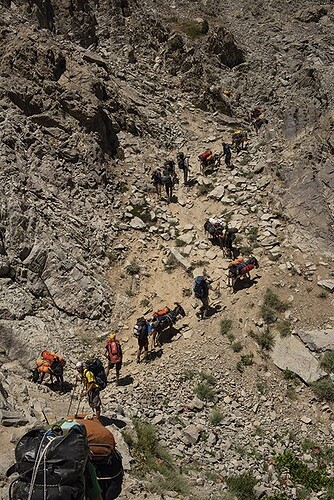 “The path was so treacherous that one of the donkeys fell down a cliff and died,” says Langford. “One of the team had to climb down to the poor beast to recover our equipment.”

Eventually, the team reached a point where it was too tricky for the donkeys to continue, so they hauled the kit the rest of the way to base camp themselves. From the base camp, it’s still a two-hour hike followed by a 100m rope climb to reach the jaws of Dark Star.

Why are scientists bothering to traipse for days across inhospitable terrain to reach a remote corner of Uzbekistan? What could possibly be lying in the depths of the cave to make all this hardship worthwhile?

The answer: an accurate climate clock.

Information about Earth’s past and future climate is captured in cave mineral deposits. These are made from flowing or dripping water laden with minerals – calcite, aragonite and gypsum. Over time, the minerals build up to create rock formations called stalagmites and stalactites.

“By analysing such cave mineral deposits, I can go into the past and learn more about how the local climate evolves, and how that reflects regional or global changes,” says Dr Sebastian Breitenbach, a palaeoclimatologist at Northumbria University, who’s currently working on samples from Dark Star.

“The [usual] ‘radiocarbon clock’ only works back to about 40-50,000 years and then it’s over because there’s no radioactive carbon left to count. Beyond 40,000 years, we have very little information about past climate in terms of chronology. But the great advantage of using cave deposits is that we can use other radioisotopes, such as uranium, which have a longer decay chain. This basically means that we can track the time accurately to about half a million years.

“Both uranium and lead can be present in stalagmites. And we can leap even further back if we use uranium-lead, because lead is stable – theoretically, we could date back to the Big Bang. And once you have the dating, you have a chronology, and can use climate proxies to look into how the climate – and environment – evolved.”

In short, stalagmites are great climate archives because they grow in caves all over the world, relatively undisturbed for millions of years, isolated from external factors, such as extreme weather and human or animal interference. But getting a good sample from such remote settings back to the lab can be challenging – if the stalagmite breaks, it’s a long, long journey back to get another one. 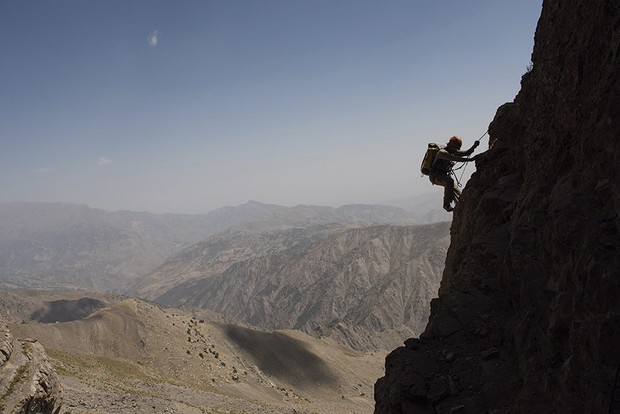 All of these palaeoclimate records can be used to understand the past and predict the future. Indeed, archaeologists are using Breitenbach’s results to solve the puzzle of how modern humans and their predecessors migrated back and forth across Asia – and what drove their migration.

“Archaeologists want to understand how humans interact with nature and how climate impacts decisions on when, how and why they moved,” says Breitenbach.

“Temperature was not a problem for modern humans, Denisovans or Neanderthals. The key was water. Palaeoclimate records built on stalagmites are our best bet to discover which time intervals were suitable for human habitation and which were more hostile.” 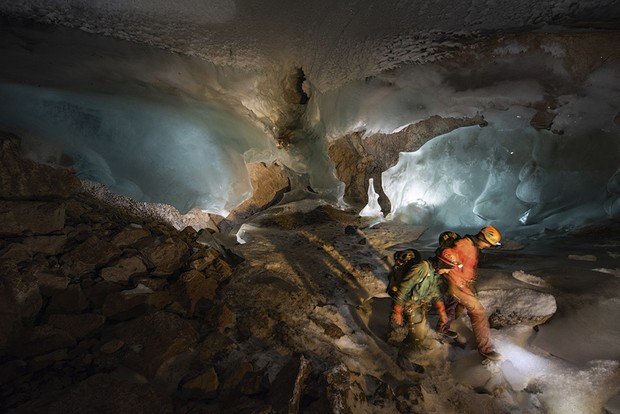 Blue ice is a common sight in the caves, even when temperatures outside are as high as 37°C © Robbie Shone

Meanwhile, scientists are also using palaeoclimate records from cave sediments to predict future climate change and, crucially, water supplies in the region. Mountain ranges such as the Himalayas are, in essence, the water towers of the world. And if ice contained in the region’s glaciers and permafrost is lost, rivers like the Ganges will dry up, cutting the water supply to people in the surrounding countries, such as Uzbekistan, Kurdistan, India and China.

“Stalagmite records, like tree-ring records, are often very detailed and well dated,” says Dr Alex Baker, from the National Centre for Atmospheric Science at the University of Reading.

“This is important because they can tell us how rapid past episodes of regional climate change were and how quickly the climate was able to recover. This information can be used to estimate how glacier retreat might be curtailed if and when greenhouse gas emissions are meaningfully reduced. Such estimates can be highly uncertain, so continued development of climate models and better palaeoclimate records are always needed.”

Furthermore, using stalagmite records as a reference, scientists can see how well a climate model matches the records for the last few decades and predict climate change in the next few. 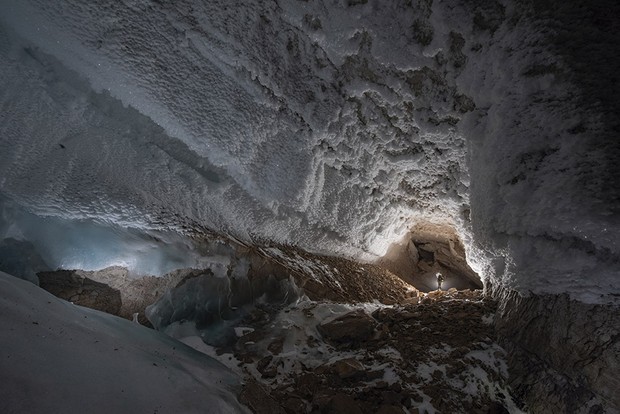 “Palaeoclimate records of the recent past are particularly useful in remote regions, where instrumental data from meteorological stations are either sparse or less reliable, due to difficulties in performing measurements in challenging environments,” says Baker.

“They also help us understand natural variability in the climate system and to place the changes we’re observing into a longer-term context. Often this allows us to go one step further and establish whether those changes are beyond the natural variability of the recent past and driven instead by human activities.”

Back inside the Dark Star cave system, Langford and his colleagues were tasked with mapping uncharted terrain and establishing a new base camp. The expedition had already set one up at a depth of 450m, but they were hunting for a good spot deeper underground.

They spent five days exploring passages, stumbling upon new chambers and surveying – using laser distometers to take measurements, which were then fed into a tablet to generate maps. When passages became too narrow, the team used their engineering skills to ‘nibble through’ the rock and make them fractionally wider. Their tenacity paid off and they found a spot 800m down, with a water supply and flat enough to erect tents on.

Deep inside the cave system there’s no natural light, so it would be easy to lose track of time. Explorers tend to keep to the same timing as on the surface. When it comes to food, everyone below ground cooks for themselves. 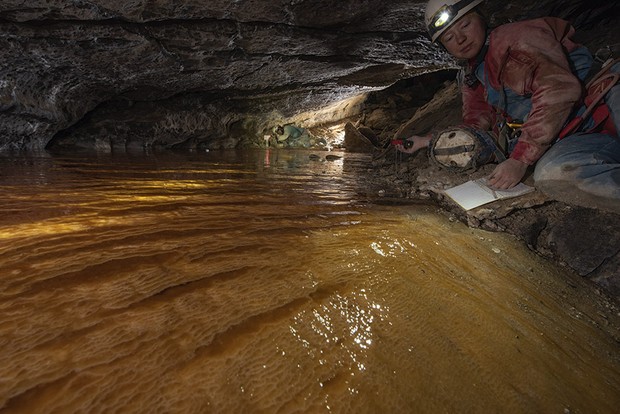 Water is in ready supply and the cavers drink directly from streams in Dark Star. In cave systems elsewhere, water often has to be boiled to make it potable, as base camps may be directly under one another and the water flowing down becomes polluted from the ‘toilet’ above.

One issue in Dark Star is the cold. Hypothermia is a problem and can strike very quickly. “Outside it can be 20°C and inside close to zero,” says Langford. “You have to be kitted out ready to work super-fast against the cold. And, when you’re not working, you can get really cold during the night. If the underground base camp is full – say, five people – then great, you’re warm. But if it’s just three people, you need a good sleeping bag.”

To some people, such an adventure may sound exhilarating. To others, the idea of sleeping in freezing temperatures and wriggling along narrow passages might sound petrifying. After all, there are horror stories of cavers getting lost and never being seen again. No such fate has befallen any expedition member venturing into Dark Star – or, at least, not yet.

But Langford says most cavers are like him and never get nervous about an expedition: “Honestly, I’m just super-focused about it. I don’t think about the possibility of getting injured or lost or something like that. I just follow the mission. You need colleagues you can rely on when exploring to help you out if you get in a tricky situation. And you need someone to share your experience with – someone to chat to in the evening. A caving expedition is a really social experience.” 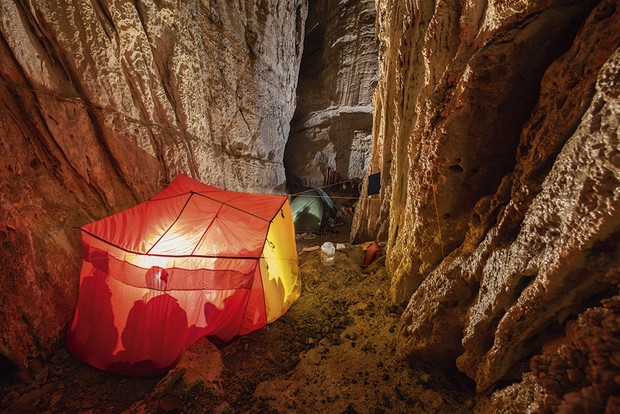 More than a mile inside the mountain, where the temperature is around 2°C, the team pitch tents for the night © Robbie Shone

Experts believe there’s still a lot left to explore and discover in Dark Star’s hidden depths. Maybe one day it’ll even take over the title of world’s deepest cave from the current holder, the 2,212m-deep Veryovkina Cave in Georgia.

But the bigger prize than the world record is gaining invaluable palaeoclimate records from any of the caves in the area. As Breitenbach says: “We still have so many questions to answer and gaps in our climate record. We need to go back to the region because some samples don’t cover important time intervals. The whole Baisun-Tau mountain range may become a pillar for palaeoclimate reconstruction.”

Indeed, palaeoclimate records are vital to understanding past climate variability and are the key to predicting future climate change. The lives of so many depend on it.