Flat-Earthers Have a Wild New Theory About Forests : What it means to believe that “real” trees no longer exist !

List members , Flat Earth theorists are usually way off target in their science , but the subject of gigantic trees in the ancient world is one topic where they seem to make good sense :- 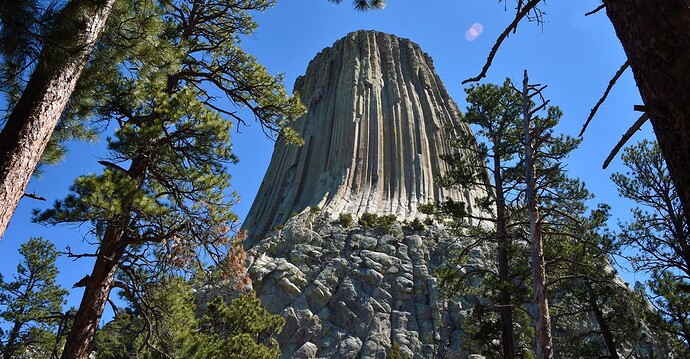 Flat-Earthers Have a Wild New Theory About Forests

What it means to believe that "real" trees no longer exist

Flat-Earthers Have a Wild New Theory About Forests

What it means to believe that “real” trees no longer exist 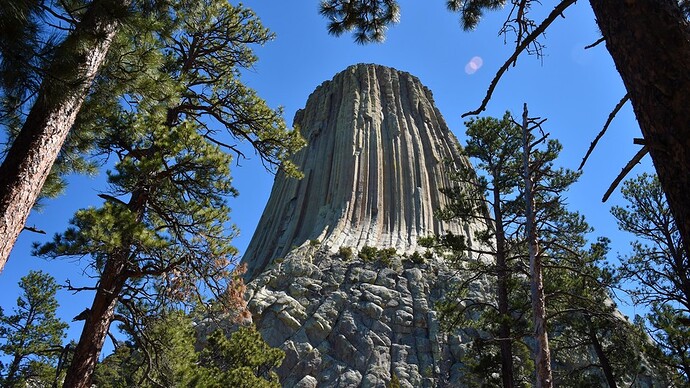 The "No Forests on Flat Earth" truthers believe Devils Tower in Wyoming is the stump of a "real" tree. (Mladen Antonov / Getty )

Something tremendous is happening; over the last few weeks, without too many of its globe-headed detractors noticing, a surprisingly vast community on the tattered fringes of intellectual orthodoxy is in turmoil. A bizarre new theory has turned the flat earth upside down. The flat earth is still flat, but now it’s dotted with tiny imitations of the truly enormous trees that once covered the continents, and which in our deforested age we can hardly even remember.

I’ve always been mildly obsessed with the flat-earth truth movement, the sprawling network of people utterly convinced that the world has been lied to for centuries about its own physical shape. The particulars differ, but here everyone takes it as a given that a conspiracy reaching from your first schoolteacher to NASA to the metaphysical Beyond has deluded humanity, making us believe that we’re nothing more than something that grew on a rock, a layer of biological grease mouldering on the surface of a ball suspended in empty space, when we’re actually living on a flat plane.

Part of this fascination is anthropological: once, if you wanted to encounter an entirely different ontological system, you had to probe deep into jungles and deserts, pith helmet capping your Western arrogance. Now, with the peculiar cosmology of capitalist production subsuming an entire planet into its logic, mythological worlds are increasingly homogenized, and all that difference and weirdness is no longer geographically extensive. If you want to encounter very different realities, you can find them online, and each time the world reveals itself to be a little richer than you’d thought.

Still, among all the bizarre, self-enclosed universes the internet has to offer—gold-standard bores, UFO chasers, people who believe that cartoons are real in a nearby dimension or that the secret rulers of the world are betraying their existence by leaving little clues on the currency—the flat-earthers are special. Flat earth insists on the primacy of direct experience (look at the horizon, really look, and try to see the curve) against abstract domination. It’s an imaginative protest against the stupidity of our actual dreary sphere. As I’ve written elsewhere, “in an era where so much of the world is disenchanting and so much of social existence is already a given—you will have your job, you will have your life, you will be exploited and then you will die—there are people who can dream the Earth itself into a different shape.”

All this is obvious nonsense, but it’s worth thinking about why it’s had the impact it has.

But lately, there’s been a change; something new and furious is growing in the community. ‘No Forests on Flat Earth’ is an incredible new theory, proposed only last month. Its claim is grand, counterintuitive, and beautiful: we were lied to; our flat earth has no forests. Thousands of people are ready to believe it. This might prove to be important; you can’t understand our reality without understanding those dark and secret places where it’s denied. New discoveries in mainstream science just tell us about the physical universe; earth-shattering developments in the conspiracy-theory fringe tell us what’s happening to ourselves. ‘No Forests on Flat Earth’ might be the future of weirdness, and it’s utterly magnificent.

The response to the video has been huge—since it was first posted by a Crimean man calling himself Людин Рɣси, ‘There are no forests on Flat Earth Wake Up’ has been viewed hundreds of thousands of times, spawned hundreds of blog posts in the broader flat-earth-o-sphere and, at the time of writing, has gathered over ten thousand response videos. There’s been an ‘explainer,’ a ‘decoding,’ a biblical exegesis, a roundtable discussion (in fact, many, many roundtable discussions), and, inevitably, accusations that the precipitous popularity of the video is proof that it’s all a plot by the ‘control grid’ to distract from the real truth. Unfortunately, the ‘No Forests on Flat Earth’ video is also nearly an hour-and-a-half long. You should absolutely watch the whole thing—but if you’re not the kind of dedicated weirdo who wants to waste a decent chunk of their day watching ludic conspiracy-theory pseudogeology, I’m willing to give you a summary.

We start with a montage of forests, peaceful scenes studded with sunlight, the kind of pictures just waiting for some inspirational quote to be plastered on top of them. We’ve all seen forests, we all know what they are; how could anyone claim that they don’t exist? But our narrator knows better. “They make us think that this is a forest,” he tells us, “when you are actually looking at thirty-meter bushes. After watching this video, you will reverse your concept of forests by 360 degrees.” This isn’t a forest at all: only a diminished imitation. Thousands of years ago, a cataclysmic event destroyed 99% of the Earth’s biosphere, and when it happened, it took away the real forests. Real trees are nothing like their stunted cousins, the miserable perishing scraps of wood that we see today; they were truly vast, hundreds of kilometers tall, magical organisms that sustained a total living ecology of the flat earth. These things were the anchor of a beautiful world that has now vanished forever. And how does he know? Because everywhere around us, we can see their stumps.

The first piece of evidence is Devils Tower in Wyoming, U.S.A., a great geological stub (pictured above) rising out of the rolling lowlands on all sides, four hundred meters of towering igneous rock that may have formed as a volcanic plug, rising out of the ground as the sedimentary stone that surrounded it slowly eroded away. Or so they want you to think. See its intricate hexagonal columns, curving up in a way that looks almost organic. See the perfection of its sheared-flat summit. Doesn’t this remind you of something?

For several minutes, our guide to this new reality shows us images of mesas, plateaux, flat-topped mountains, chunks of isolated cliffs, placed next to pictures of astoundingly similar-looking tree-stumps. Every time there’s the same challenge. ‘Name ten differences.’ You can’t. ‘There are only two differences: material and size.’ These things look the same: they are the same thing.

Not just mesas—ordinary mountains are contrasted with the shattered, splintered remnants of trees; the Giant’s Causeway in Ireland is revealed to be a petrified organic structure, because (we’re told) cooling lava simply does not assume these shapes. There is no such thing as a mountain; there is no such thing as inert rock. Everything we walk on was once living wood, the mountain ranges were once tremendous forests reaching up to the stellar canopy, providing a link between humanity and the celestial spheres. The earth was really flat. But some malignant power cut all these trees down using vast machinery, and ever since then they’ve been gouging into the corpse of the earth, mining the dead trees for precious minerals, carving deep quarries that we, in our ignorance, call gorges and canyons (you can see the monstrous tracks leading away from Antarctic valleys); we think they’re natural, we even think that the traces of our destruction are somehow beautiful.

At this point the video starts to lose focus. The narrator alleges that a nuclear war took place in the 19th century, that large bathtubs are proof of the technological complexities of previous ages, that volcanoes are massive slag piles boiling with reactive chemical waste. All this is obvious nonsense, but it’s worth thinking about why it’s had the impact it has.

In the roundtable discussion, various theorists rhapsodize about how deeply the video ‘resonated’ with them, they laugh that mainstream geology might just buckle under the weight of this incredible new research. And there is something that resonates. Against both the panpsychicism of hippie ecology, the bleary-eyed invocations of some dismally all-encompassing Mother Earth, and the pedantic materialism of most sciences as they’re actually practiced, ‘No Forests on Flat Earth’ proposes a kind of hylothanatism, a pessimism for our own weary age: this world was once alive, everything was once beautifully connected, but not any more. This earth has been dead for millennia; what we think of as progress is just the rot spreading through the cadaver of the world.

There are mythic assonances here—beyond the familiar world-trees of Norse cosmogony, the notion of a world built on a corpse has always fascinated people; Babylonian mythology, for instance, has the entire universe butchered out of the body of Tiamat, the primordial mother. Its mode of argument—‘this thing looks like this other thing, therefore they’re the same thing’—is also familiar. In The Order of Things, Foucault describes the medieval episteme: “It was resemblance that organized the play of symbols, made possible knowledge of things visible and invisible, and controlled the art of representing them.” The world was configured as one single text, a great chain of being explicable to those who knew how to read the signs. Bestiaries would record not just the physical characteristics of various animals, but their symbolic attributes. If a plant resembled a part of the human body, it could be used to treat its diseases; the map of the cosmos is also a map of the human body, and the pattern of the stars is also a horticultural manual. Foucault quotes Crollius: “Just as each herb or plant is a terrestrial star looking up at the sky, so also each star is a celestial plant in spiritual form, which differs from the terrestrial plants in matter alone.”

Foucault himself has a very ‘No Forests’ sadness for the loss of this world of interlinking resemblances in the 16th century, lamenting that “there is nothing now that still recalls even the memory of that being. Nothing, except perhaps literature.” The experience of modernity is one of a lost unity, and with an emerging capitalism came a world no longer required to be explicable, only fungible. But this lost world is not just something that falls away with modernity—as Freud points out, the formation of the conscious mind is similar: the ego is a “precipitate of lost objects.” Freud occasionally talks about an ‘oceanic’ feeling of unity, a remnant of very early childhood, when the mind is unable to distinguish between itself and the outside world. In the oral stage of psychosexual development, the child considers its mothers breast to be as much a part of itself as its own body. We are what we are because something else went away; when we become ourselves, we lose the vastness of everything else.

There’s a sense in which ‘No Forests’ could be seen as a way of getting this feeling back: if you believe in the giant trees, if you follow the chain of resemblances back to its megadendric origin, then you too can participate in the unity of all things on our flat earth. But at the same time it refuses the impulse to simply regress back to childhood. The trees are gone forever, and we’re not getting them back; we mourn for them, but the question of what we can possibly do now is unasked and unanswerable. ‘No Forests’ doesn’t give us cheap and easy solutions; instead, instead it just simply and starkly provides a map and mirror for our abandonment.